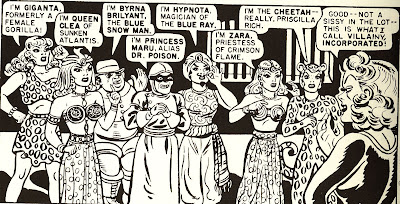 I’ve been reading Ami Angelwings’ blog a lot lately, and despite the fact that I don’t really speak emoticon very well, Ms. Angelwings had a very good point about the usage of Circe in the DCU lately, which she made in discussing last week’s Amazon-related comics:

This is Circe's FOURTH "big reveal" scene in the past year. >:|

And she's revealed as the villain again here. >.<;;

Does DC realize that Wonder Woman has OTHER villains!? >:O

A better one still might be does Gail Simone realize that Wonder Woman has other villains? Because Ms. Simone is going to be taking the title over soon, around about the time I like to refer to as When I Will Start Spending Money on Wonder Woman Comics Again.

The answer is, of course, yes. Simone surely knows about Dr. Psycho, as Simone has become the definitive Dr. Psycho writer over the past few years (Although, to be fair, there have only been, like, three writers to use him in that time).

And I’m willing to bet she knows about The Cheetah, or at least the current version of the character, whom she briefly wrote during her short run on a Superman book.

But that’s only four villains, and probably four of Wondy’s least interesting bad guys. How deep is Simone’s knowledge of Wonder Woman’s extensively awesome rogue’s gallery? I’d like to think hella-deep, because Simone’s currently locked in a tower with every Wonder Woman story ever published, from Marston to Perez to Jimenez to Rucka, and everything in between.

But then, that may just be wishful thinking.

See, I once saw Simone confess to ignorance of who The Velvet Tiger was in a Birds of Prey-related Newsarama.com comments thread, and considering the fact that Velvet Tiger is, like, the only Barbara Gordon rogue, I don’t want to get my hopes up too much about Simone turning out to be some sort of Wonder Woman scholar.

So the focus of today’s installment Wonder Woman Wednesdays?

Wonder Woman villains other than Circe that Gail Simone should strongly consider using. (If you’re not Gail Simone yourself, please feel free to read along anyway). 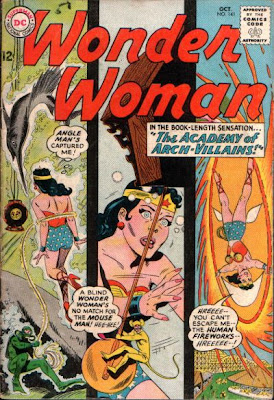 (That’s The Fireworks Man on the far right, in his Catherine wheel form)

THE FIREWORKS MAN, aka THE HUMAN FIREWORKS: The Fireworks Man was a man with all the powers of fireworks, like the ability to fly through the air, and transform into a giant Catherine wheel, and, um, frighten dogs, and, uh, inspire large summer outdoor gatherings, and…hurt your eyes…if you look at him too long…?

Okay, so he’s pretty lame, but come on Ms. Simone, you do like a challenge don’t you? He’s never taken Wonder Woman out, but he did temporarily blind her, making it slightly less impossible for Mouse Man (more on him below) to get the better of her.

HYPNOTA THE GREAT: After an accidental gunshot wound to the head sent Hypnota to the hospital, a specialized surgeon was called in to perform a delicate operation which involved her “emotion centers.” While she was recovering, nurses noticed a blue ray emanating from Hypnota’s eyes.

The surgeon immediately diagnoses the problem: “Great zounds! That’s the blue electric ray of dominance from Hypnota’s mid-brain — my operations must have released it!”

I only have a bachelor’s degree in English, so I’m afraid I’m ill-suited to offer an opinion on whether or not Hypnota’s origin is medically sound or not. We’ll just have to take the comic book’s word for it.

At any rate, Hypnota disguised herself as a man with a French accent and cool goatee and moustache, and used her ray in her stage act—as well as to force her twin sister Serva to serve her, and to cultivate a lucrative trade in “mental slaves.” A particularly lucrative market for mental slaves was the planet Saturn, but after Wonder Woman busted up the Saturarian slave racket, Hypnota focused on trying to start a war between Saturn and Earth (Which, come to think of it, might have ended World War II faster, if the Axis and the Allies had to join forces to repel the Saturnarians).

Hypnota was a welcome addition to Wonder Woman’s Golden Age rogues gallery because she was essentially a cross-dresser, and, despite all the spanking, submission and domination in the Wonder Woman stories of the era, that was a kink that was sorely underrepresented. In fact, aside from Dr. Poison, I think Hypnota was maybe the first of Wondy’s cross-dressing foes? Also, her whole deal revolved around domination and submission like, you know, all Wonder Woman villains back in the good old days.

Once she was outted as a she, however, she pretty much just resembled a bearded lady. And as anyone who’s read Steve Rude’s The Moth or Linda Medley’s highly recommended Castle Waiting can readily attest, that’s hot.

I’m not sure if Hypnota ever made it into the post-Crisis DCU, but if not, you’re the woman to do it, Ms. Simone!

And considering what we know about Saturn from Jemm, Son of Saturn and John Ostrander’s Martian Manhunter, it would be interesting to see interplanetary relations between the two planet revisited now that Wonder Woman is set in a shared universe, instead of it’s own unique universe, as in the Golden Age. 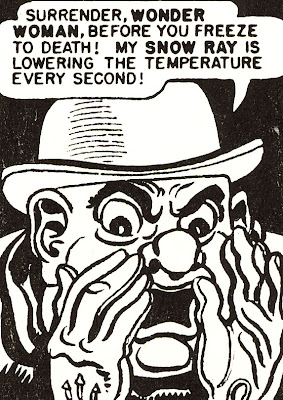 THE BLUE SNOWMAN: Byrna Brilyant was a school teacher in the small, farming town named Fair Weather Valley. With a name like that, it was pretty much begging that someone attack it with a “telescopic snow ray” that creates “blue snow” capable of “freezing” everything it touches into blue statues. The only antidote to the freezing effect was a special chemical possessed only by an extortionist calling himself The Blue Snowman, who demanded the farmers pay him lots of money, or lose their crops to blue snow.

This is, of course, a very bad use of technology, along the lines of Mirror Master using his revolutionary means of transportation to rob banks. If you’ve got a blue snow ray, you could probably make more selling the tech to the U.S. military (or that of any country) or, if your heart’s totally set on extortion, extorting, I don’t know, Washington D. C. or New York City, instead of Generic Farmtown, U.S.A.

At any rate, when word of the freak blue blizzards reach the American military, Steve Trevor and his secretary swoop into action and Wonder Woman eventually unmasks the Snow Man, who turns out to be no man, but a woman, Ms. Brilyant, the daughter of a scientist who invented the ray.

This is cool because it introduces another cross-dressing villainess into Wonder Woman’s rogue’s gallery. Also the Blue Snow Man was a woman wearing a man-suit in 1946—Eat it, Ronin!

The Blue Snow Man was part of the original Villany, Inc. line-up (pictured way up top there), but I haven’t heard anything about him/her since. I don’t know if she even exists post-Crisis and, if not, she should. 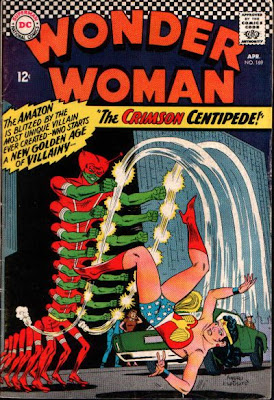 THE CRIMSON CENTIPEDE: In Wonder Woman #169, Roman war god Mars unleashed crazy-ass villain “Crimson Centipede” upon Earth, with the mission to begin a “new Golden Age of Villainy.” It didn’t last long, as this was the first and only appearance of C.C. The only one until you bring us more Crimson Centipede action, anyway, Ms. Simone.

Points to cover in your story: Why is he called the Crimson Centipede, instead of, oh, Centipede Man? I have a hard time believing that name was already taken, and he’s clearly not actually a red centipede, but a green centipede man. Also, why is he the Crimson Centipede, and not just the Red Centipede? And where did he get that costume? A scene of him suiting up would be quite welcome; I envision a ten-page sequence of panel after panel of sleeves being pulled over arms, and feet going into boots.

I haven’t actually read this story, but I love the cover. At first I thought he just walloped Wondy with sixteen fists at once, but the more I think about it, I’m guessing he gave her a series of eight double-uppercuts, starting with the lowest set of arms and punching her up to the next set of fists until he runs out of fists, and then she goes down like a ton of bricks. 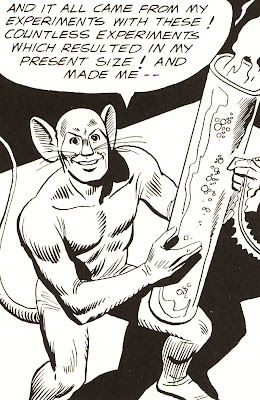 MOUSE MAN: If you’re anything like me, at one time or another you’ve probably found yourself wondering if it were possible for a set of super-powers to be more useless than those of the original Ant-Man, who had the ability to shrink to the size of an ant and the ability to control ants.

The answer is yes, it is possible to have lamer powers. You could shrink to the size of a mouse, which is small enough to be weak and easy to step on, but not small enough to be practically invisible, like an ant. And have the ability to control mice which, okay, is better than not being able to control anything, but at least some ants can fly, so you can keep up with other superheroes, whereas mice just kinda scurry around.

These are the powers of Mouse Man, who came face-to-shin with Wonder Woman a couple times in the late ‘60s.

He wears a dumb-ass mouse costume (if that’s not redundant; are there any totally kick-ass mouse costumes out there?) and commits crimes utilizing his tiny size and command of mice and rats (Much more useful, though it didn’t save the Ratcatcher in Infinite Crisis).

He even succeeded in capturing Wonder Woman once, but it ended up simply being a result of Wondy employing Classic Wonder Woman Crime-Fighting Strategy #1: Allow yourself to be taken captive so the bad guy will lead you back to his or her headquarters and/or superiors so you can beat them all up at once.

I may not be selling Mouse Man very well here, but I’d still like to see you take a crack at him Ms. Simone, mainly because you’ve proven to be quite a Catman writer over the course of Villains United and Secret Six, and I think there’s a cool Mouse Man vs. Catman story (or seven) to be told. 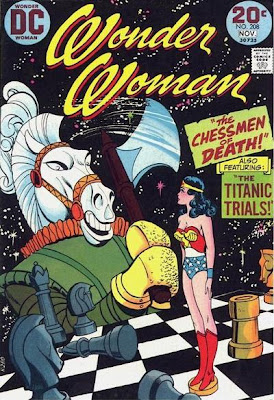 Great post! I've just read a reprint of "Villainy Incorporated", and you've helped sort out my confusion about Hypnota and The Blue Snowman (who are each referred to as "he") in that story.

Dude (and Gail!) Mouse Man totally needs to be the next member of the Secret Six. How great would that be if Catman and Mouse Man were partners.

Wow, Wonder Woman's rouges' gallery is worse than Ant-man's. Wouldn't have bet on that, but there it is.

Cap,
Yeah, I thought I'd heard John Ostrander's upcoming Suicide Squad would result in the loss of Deadsho from the Secret 6. Mouse Man could totally fill that void!

I don't know if that would work.

I have visions on Mouse Man dropping anvils on Catman's head, then running back into a small hole in the wall with a chunk of Swiss cheese.

Re: "See, I once saw Simone confess to ignorance of who The Velvet Tiger was in a Birds of Prey-related Newsarama.com comments thread, and considering the fact that Velvet Tiger is, like, the only Barbara Gordon rogue, I don’t want to get my hopes up too much about Simone turning out to be some sort of Wonder Woman scholar."

Another Barbara Gordon foe was Lady Viper (from Detective Comics #514, May 1982).