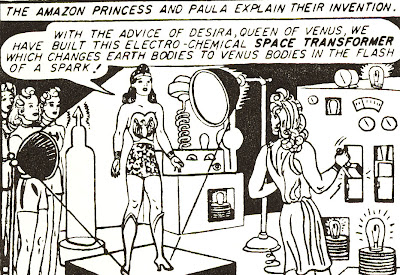 Amazon Princess and young scientist Diana once invented a purple healing ray to save the life of grievously wounded U.S. pilot Steve Trevor. She named her fantastic invention The Purple Healing Ray, on account of the fact that it was a purplish ray that could heal people.

It is probably Amazonian science’s most well known contribution to World War II-era super-science, rivaled only by the mental radio, a form of artificial telepathy used by Amazons to communicate with one another (and with their allies).

Let’s take a look at some of the other fantastic examples of technology that Princess Diana had encountered in her earliest adventures:


The AS-R beam — Even more potent than the purple healing ray, the “atomic structure reassembly beam” can be used to reassemble the atoms of anything organic or inorganic which has been damaged or destroyed. The original beam generator, and the knowledge of how to build it, was apparently lost during the Crisis On Infinite Earths. Otherwise, Diana could have just reassembled her mother when she died during the conflict with Imperiex.


Amozonium – The hardest substance known to man. Well, women. This is what Wonder Woman’s bracelets were made out of. Clearly, it’s bulletproof.


Elastic Amozonium, a.k.a. Amazsilikon — A type of Amozonium that is more stretchable and verstaitle, and can be made invisible. This is what Wonder Woman’s robot plane/invisible jet were made out of.


Electro-chemical space transformer – An invention of Wonder Woman and her foe-turned-friend Paula von Gunther’s that changes the atomic structure of a human body and “rearranges its spatial relativity in the universe, as explained by Professor Einstein.” It’s also the easiest way to get Venus. See diagram above.


Amazon trans-materialization machine — A teleportation machine, based on principals similar to that of the electro-chemical space transformer.


Futuro-scope — A device that allows Amazons to see the future. Kind of self-explanatory, really. Built (and patented!) long before T.O. Morrow built his own looking-into-the-future machine.


Amazon omni-wave transmitter — A robot plane-mounted device that picks up any and all distress signals, no matter what wavelength they might be sent on.


Uni-televisior — A sort of television phone that allows for teleconferencing, invented during or before World War II…decades before Man’s World would invent their own version.


S-time bomb — A bomb capable of ending the world, once employed in a threat by which alien crystal creature Andro. While it remains unproven, some in Man’s World have hypothesized that the “S” stands for “Shit-hitting-the-fan.”


De-activating electronic generator – A device that generates “an interfering electronic wave that will stop any electric current in the world.” Developed and employed by a Mr. Keen, a former railroad magnate who adopted the colorful costumed criminal identity of “Anti Electric” in an attempt to hold the world hostage. Sorta like an electro-magnetic pulse, but Keen was generating them back before EMPs were cool.


The war-prevento machine — A machine that prevents war. Invented by the curiously named Dr. Cerebrum, the fantastic device used “somnatic rays to render warmakers unconscious long enough for us to capture them and their armies.” So I guess it’s not really a war-prevento machine as a “casualty-reduco machine” or a “sleep-inducing weapon.” Dr. Cerebrum learns this the hard way, when Dr. Psycho stole the device to, in his words, “enslave and kill the innocent people of the world!” Oh, Dr. Psycho!


Moron hormone — The hormone that makes people stupid. Swear to God. Don’t look at me. Talk to William Moultan Marston. What, he’s dead? Well, put him under the AS-R beam and then ask him.

Womania germ — An insidious form of germ warfare pioneered by Japanese scientists during WWII. The Womania germ is delivered by the bite of, um, “Jap gnats” and, when it enters a woman’s blood stream, it drives her into a murderous rage to kill all men. Oddly, though a Japanese invention, it has an English-sounding name. Huh.
Posted by Caleb at 8:23 PM


You may also find it useful to visit my website: http://www.healinginstitute.info