The Greatest Superman Vs. Darkseid Fight Ever 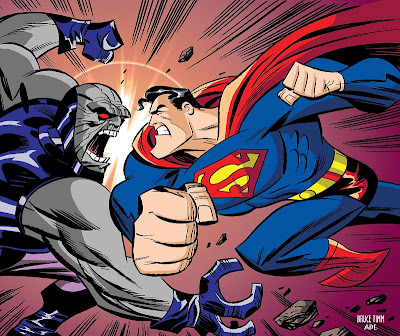 Superman and Darkseid sure seem to fight one another a lot, don't they? I wonder why that is, exactly.

I mean, yeah, sure, Superman is the ultimate hero in the DC Universe, and Darkseid is the ultimate villain, so it makes a certain amount of sense that the two would cross paths at some point, but, on the other hand, they belong to two very different franchises, each with their own fairly rich settings and casts.

In fact, if Jack Kirby didn't end up working on Superman's Pal Jimmy Olsen at the same time he was creating his Fourth World saga because he lost a bet or took a dare or whatever, the delicate connective tissue between the two characters would be severed.

The thing I dislike about Superman and Darkseid conflicts is that too often they devolve into fisticuffs, and seeing Darkseid getting smacked around by Superman just really seems to suck all the coolness out of the character for me. I'm a fan of the godlike Superman who can fly faster than light, keep pace with the Flash, hurl planets and do just about anything, but even if it's conceivable that he could kick Darkseid's ass, I don't like to see it happening, because as godlike as Superman may be, he's still a mortal, and Darkseid isn't just godlike, he is an actual freaking god (or ancient alien entity that thinks it's a god. Whatever) and should thus either be able to whomp on Supes or, better still, never lower himself to exchanging blows with him. 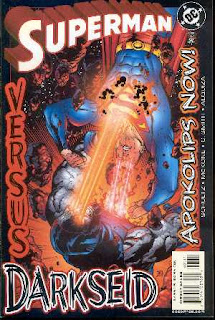 My favorite portrayal of Darkseid is probably the one in JLA arc "Rock of Ages," in which he is a stone giant whose Omega Beams were inescapable and would end you if they touched you. I mean, what's the point of calling your eye beams "Omega Beams" if they just knock a dude down? The Darkseid/Superman conflicts I like to see are the ones in which the Apokaliptian tyrant is sort of like a cosmic Lex Luthor, manipulating Superman and watching as Big Blue brawls with his underlings like Kaliback and company because while he could take him down with his neat little zig-zaggy eyebeams at any moment, he tells us Supeman just doesn't deserve to die by Darkseid's hand (Or eye. Whatever).

When Superman and Darkseid go at each other man on man, with Supes shrugging off Omega Beams just as easily as Darkseid shrugs off heat-vision, it reduces Darkseid to just another Superman-level bruiser, akin to a Mongul or Zod or Bizzarro instead of what he is, the universe's ultimate bad guy.

Plus, every story I've ever read in which Darkseid and Superman fought each other has pretty much been terrible (Even those that weren't written by Jeph Loeb).

Which brings us to the subject of this post, The Greatest Superman vs. Darkseid Fight Ever.

It occurred during Cosmic Odyssey. To set the thing up for those of you who haven't yet had the pleasure of this fantastic story (full of great Mike Mignola pencil art), basically Highfather has summoned a group of Earth heroes to New Genesis to discuss a threat, and Supes turns a corner and walks smack into Darkseid.

Their brief fight—two blows exchanged?—manages to make both of them look super-powerful, without actually showing us what exactly happened, so we don't have to look at and contemplate the two of them acting like kids on a school yard. We simply see Superman fly at Darkseid, get knocked down, and then get back up to go at him again, and think "Woah, Superman's hardcore! He flew right at Darkseid like he was nothing! And even after getting totally pwned, he's back on his feet!" And, because Superman got thrown back, we also think, "Woah! Darkseid must be pretty damn powerful! He totally sent Superman flying!"

And because others break the fight up, we don't see any resolution to the question of who's more powerful, and thus neither character is diminished by having his ass totally kicked by the other. (By contrast, after Loeb had Superman beat up Darkseid in Superman/Batman arc "Supergirl," imprisoning him in the Promethean Wall by hand, it was hard to take the big D. seriously as a scary evil god. When we see him in the beginning of Countdown, he seems like just another supervillain. How threatening is the site of him playing with Heroclix now? I mean, if worse comes to worst, we know Superman or Supergirl or Powergirl or Wonder Woman or Martian Manhunter of Captain Marvel could just travel to Apokalips and shove those toys down his throat, right?).

But what really makes this the greatest fight between the two ever?

It's not just the subtle way Starlin and Mignola characterize the combatants, nor the amusing choreography—it's Darkseid's facial expressions. Seriously, look at the grin he gives Supes over Highfather's shoulder, or the boastful "That's right!" glare he gives Superman when no one else is looking.

Man, that's why Mignola is a master of comic book drawing, right there. It's just two throwaway panels, and he does more to characterize Darkseid than just about any of Starlin's words do.

Those panels tell you everything you need to know about the villain: He's an asshole. 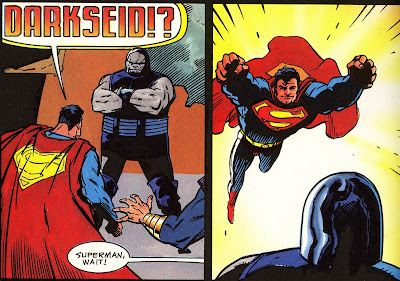 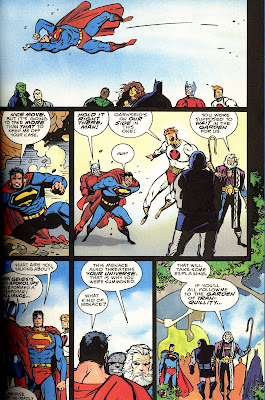 (As always, click to enlarge. Sorry about the crappy scans; I erred on the side of not-breaking-the-spine-of-my-trade. The dialogue isn't important to the fight).
Posted by Caleb at 3:18 PM

As a kid I didn't appreciate Mignola's artwork at all-- partly because I first encountered it on the terrible Phantom Stranger miniseries, but mostly because I just couldn't see what he was doing with the scratchiness and muddiness; I still basically thought all comic art should look like Curt Swan or George Perez.

The weird interpretation of the Anti-Life Equation, and the general darkness of the story, turned me off, too. But so many folks whose opinions about comics seem to track mine as an adult say how great CO was that I should have another look.

I hate "omnipotent Superman" so much.
I have hundreds of Superman comics from the 70s, and they are basically unreadable (other than for kitsch value). He can't be beaten by anything, and there's only so many kryptonite stories that can be written.

The best Darkseid/Superman fight probably happened in the cartoon, in my opinion.

I agree. The best stories about a lot of DCU characters happened in the cartoon.

I don't know about Darkseid smiling, though.

I have so much love for that COSMIC ODYSSEY mini, it's frightening. That was one of the very first things I ever remember picking up off of the shelf at an actual comic book store, as opposed to when I was buying all of my SUPERMAN comics at Waldenbooks.

The fact that it set up John Stewart to be one of the best-written DC characters over the next five or ten years (based on the events here and leading to Gerard Jones's use of him in GL: MOSAIC) probably didn't hurt any, either.

Also in that page: Orion as the voice of reason. Comedy gold.

Last point -- I don't even think Darkseid used his Omega Beams in CO, did he? The fight happened off-screen, and the big Darkseid-centric action sequence happens with Darkseid and... Highfather?... versus the Anti-Life Equation. Darkseid as Super Scientist, as I recall.

The climactic battle between the two in the last episode of the series? Because yeah, that was awesome. In fact, that whole last season was unbelievably awesome. I still laugh out loud (well, chuckle to myself) when I recall the reason Flash-in-Luthor's-body gives for not washing his hands after going to the bathroom.

Oh god, I'd hate to feel responsible for urging you to buy a trade you might not dig, but I seriously love the hell out of that series. In addition to the idiosyncratic art (I still have a hard time wrapping my head around Mignola drawing Starfire), I think the characters were all well-handled and pretty complex, particularly the J'onn and John stuff.

Yeah, I don't rememer Darkseid busing out the beams either; he and Highfather did do some crazy science magic fusion involving another Jack Kirby creation as their Pland B.

I know I'm necroposting here, but I just found your blog while running a search for "greatest Darkseid stories."

I'm not very familiar with Darkseid's history in the comics, but I thought he was portrayed rather convincingly as Superman's most lethal foe in the DC Animated Universe. I was a little disappointed with the last season of Justice League (mostly due to DC not allowing Timm and crew use of certain characters), but I loved the redesign of Darkseid in the finale. My one complaint was that Orion was not mentioned,...I'm not even sure he appeared in that episode.

As a Highlander fan, I found it rather humorous that Superman's greatest threats in the cartoon (Luthor and Darkseid) were voiced by the same actors who portrayed the villains of the first two Highlander films.

Enough of my babbling. Thanks for writing this blog; I'm going to check out this Darkseid story in the near future. Cheers!