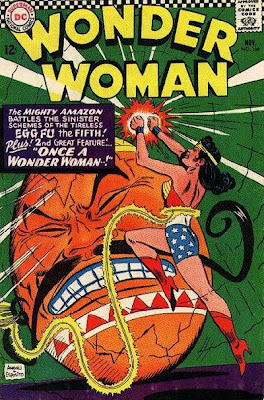 Congratulations on getting the assignment to write DC’s Wonder Woman ongoing! I can’t tell you how excited I am about your impending run, mostly because the last two runs on the book have been—how can I put this nicely?—wretched, and DC seems to have absolutely no idea what to do with the third point of their Trinity.

As you’re busy researching the hell out of Wonder Woman and trying to make sense out of the half-dozen reboots and retcons that she and her on-again, off-again sidekick Donna Troy have experienced, I thought I’d do my part to help out.

Last week, I suggested some of Wondy’s lesser rogues to consider using during your run.

But this week, I just have one word for you.

Well, actually, I have seventy-six words for you. Ready? Here they are:

You're so right about Devastation! I think that character has a lot of potential (would love to see a full grown version of her), and please can they stop using Circe as the main villain for Wonder Woman?