Current Justice League writer Brad Meltzer and current writer of one-third of all DC books Geoff Johns have made it pretty obvious that they absolutely adore the Satellite Era of Justice League history, that time in the seventies and early eighties when the World's Greatest Heroes all hung out in a clubhouse 22,3000 miles above the planet earth, going over their charter, having meetings and electing chairpeople.

For those of us on the other side of 35, it can be hard to understand what was so great about red-and-black costume Elongated Manor why today's JLoA should resemble that era more closely than the Giffen/DeMatteis JLI Era or Grant Morrison Watchtower Era. In an effort to better understand the greatness of the Satellite Era, EDILW is going to spend some quality time with all of the JLoA comics of the preriod we could get our hands on—um, about a half-dozen a friend's boyfriend wanted to clean out of his closet—which leads into our newest feature: "Satellite Era Spotlight." 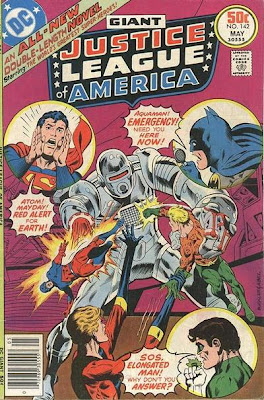 Dateline: The Atlantic Ocean, 80 miles off the coast of Georgia.

Aquaman has invited Elongated Man and The Atom to hangout and relax with him. The Atom’s awfully grumpy, about his superhero career…and his powers. 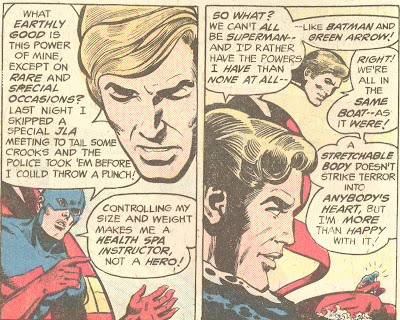 Yeah, Aquaman. It sure would suck to be like Batman or Green Arrow. Whichh reminds me, how are sales on your monthly going? Oh, what's that? You've been killed off and replaced in your own title?

Suddenly, they spot two dog-fighting space ships, and when one downs the other, Aquaman goes to investiage, and finds a telepathic alien by the name of Willow there.

“A woman--!” he exclaims. Oh yeah? What were your first two clues, Atlantean Ace?

It turns out that the other ship was piloted by a minion of The Construct, and the woman named Willow urges the heroes to take her to Atlantis, since the Construct rules the airwaves. They comply; meanwhile the ‘struct tells his origin to the minion that shot Willow down, apparently as punishment for his failure to finish her off. (I'm not sure what we did to deserve such a punishing amount of exposition). 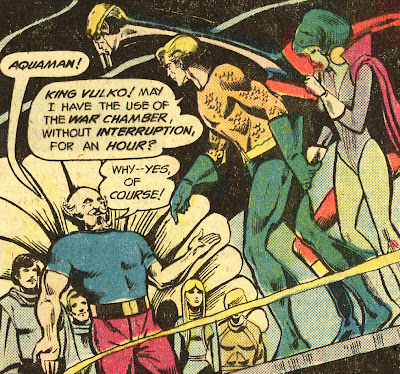 In Atlantis, Aquaman greets then-king Vulko, who’s clearly in the best shape of his life at the moment.

But the (rather stupid-looking) Construct can find them even in Atlantis, and demands they give up the girl. Aquaman tells him where to go, and the Construct is surprised at the language. Is that really a strong epithet for an Atlantean? Actually, is that even an epithet? I don't think it qualifies, since he didn't actually call the Construct a name, but hurled a rude imperative sentence at him. 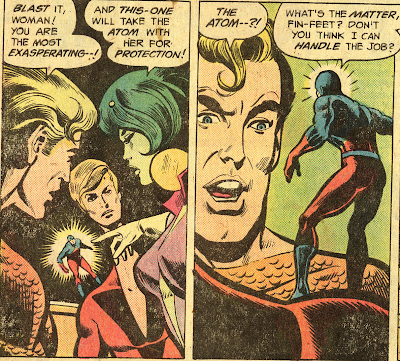 Willow breaks them up into groups, requesting the Atom act as her bodyguard. Aquaman’s a little surprised…and Atom's Napoleon complex kicks in.

(This isn't actually all that out of character for the Atom. He has quite a big chip on his tiny little shoulder. For example, his first impulse upon meeting a new recruit to the League is to stab them in the eye with a pencil.) 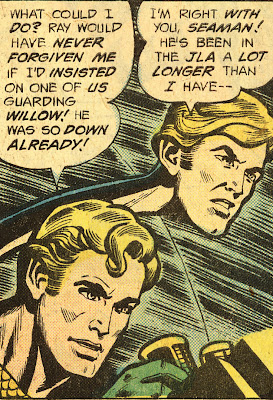 Say what Ralph? Aquaman, are you going to let that stand? 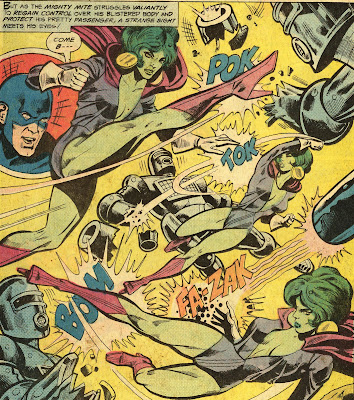 Attacked by the Construct's henchmen known as "Cannons," Willow reveals herself as “a Mistress of the Martial Arts,” which further hurts Ray’s feelings of inferiority. “I thought I was supposed to be protecting you, but t seems I was wrong! You chose me to go with you because you don’t need any protection!”

Meanwhile in Miami, Aquaman and Elongated Man find the city threatened by a death ray-emitting device, called the “Thanatron.” To deactivate it, Elongated man must first survive a barrage of strange sound effects…

Meanwhile, on the Justice League Satellite, Superman brags about his stamina, tells the others to sit this one out and rest up their poor little human bodies and even gives Wonder Woman a backhanded compliment:

Then Green Arrow calls him aside to talk about Wonder Woman: 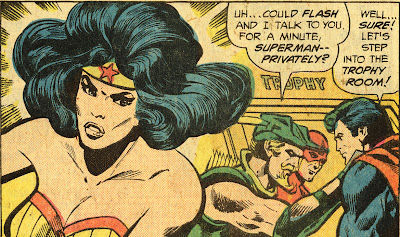 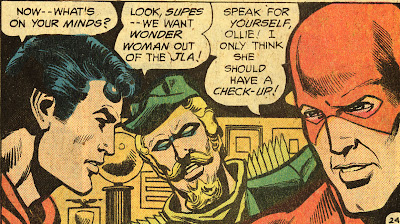 Worried about this internal strife, Superman thinks about what it may mean for the future of the League as he and Wonder Woman speed toward Earth:

Well, perhaps you could quit being such a dick. Bossing her around, giving her the patronizing "Yeah, but you get to sit down" speech...


I really like this panel, where those sensitive souls Superman and Oliver Queen try to figure out what's wrong with Wonder Woman these days: 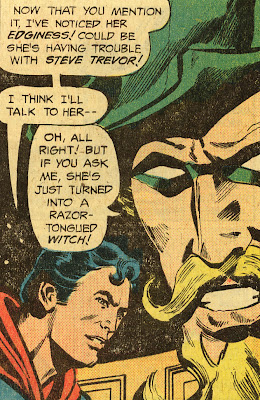 Supes' first thought is that it must be man trouble. I guess that's better than saying what surely must be his second thought, if that was his first: "Perhaps it's just her time of the month, G.A.! She'll be okay in a few days, I'm sure." And Green Arrow's just like, "Whatever; I think she' s just a total bitch." (The word "witch" being comic book code for "bitch." )


Meanwhile again, Willow and the Atom get attacked by the Construct himself, who has beamed his mind into the island they're on, building himself a body "composed of metallic ores rather than machine parts!".

The Atom simply shrinks to the size of a real Atom, too small for the Construct to attack him mentally, and jumps into his body. Inside the Construct's new body, he suddenly grows, which destroys the Construct for some reason: 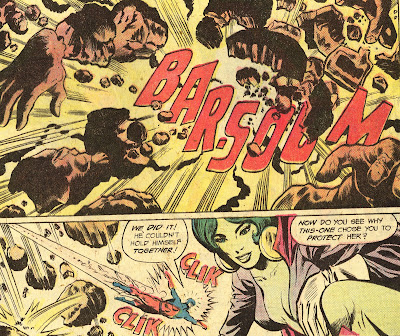 “Bar-soom?” Isn’t that the name of a Star Wars character or planet? No, I’m not joking. Seriously. Doesn’t that sound familiar?

Anyway, it all ends happily, with the Atom getting over his short man's complex and scoring a kiss from Willow: 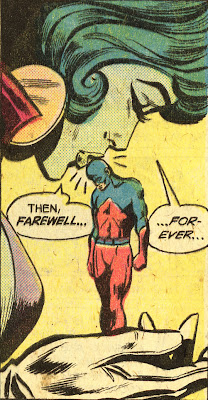 Eww. I don't know what it is exactly, but something about that image just grosses me the hell out. Trying to see it from Willow's perspective, kissing a tiny little member of the opposite sex—no matter how sexy—seems a little gross, as I'd be afraid to kiss their frail little head right off. And from the Atom's perspective, can you imagine those gigantic lips, as wide across as your own shoulders, wrapping themselves around your skull and coating your mask in a layer of saliva? Bleah!

Barsoom is the Martian word for Mars, according to Edgar Rice Burroughs.
I could never figure out why the Atom hung out in miniature form all the time. If you have an inferiority complex already, and you want to be taken seriously, you could at least try it at regular size.

Really, why would Superman, Batman and Green Lantern be calling for help from lameasses like Atom, Aquaman and Elongated Man in the first place? Was there a really tiny jar placed on a high shelf underwater that they couldn't open?

Huh. I'm not sure this is representative-- I'm on the wrong side of 35, some of my favorite comics are from this JLA era, and I don't remember either WW's edginess or Atom's sense of inferiority (or Superman being quite this much of a dick to his teammates!) in other issues.

The Construct was around an awful lot, though.

One thing you don't mention is that "Willow" is a universe-hopping alias for Mantis, from the Avengers!

Heck, all the clues were there... strange syntax, Englehart writing, martial arts mastery...