And now it's Marvel's turn. Point a second window to Newsarama.com and follow along. 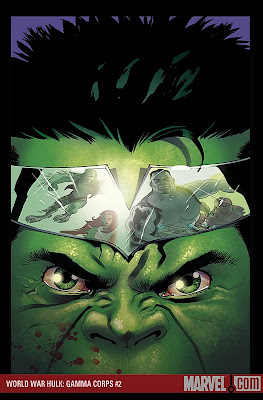 I do hope there’s a fight scene somewhere in all of these World War Hulk tie-ins where Luke Cage tries to win his tiara back from Hulk. 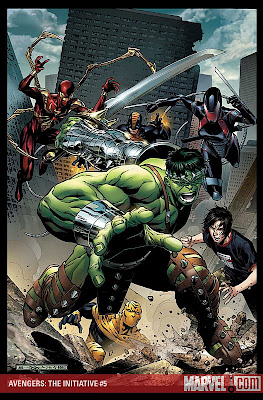 AVENGERS: THE INITIATIVE #5 Written by DAN SLOTT. Penciled by STEFANO CASELLI. Cover by JIM CHEUNG. GREEN ZONE Pt.2 of 2. "Secret Weapons.” The Initiative program denies all knowledge of a special Black Ops Team. There is no pardon on file for the super-villain known as the Constrictor. No record of any dealings with the Vietnamese national codenamed Bengal. Tony Stark cannot recall what became of his designs for the Iron Spider armor. And, most importantly, the Superhuman Armed Forces wishes to dispell all rumors of a 199th mutant. We repeat, there is no Mutant Zero. Mutant Zero does NOT exist. That is all. 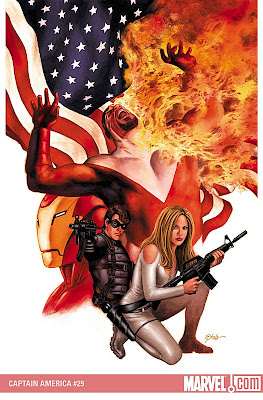 Dorian Wright already pointed out the obvious with this cover, beating me to it. In a way, it’s cool that it made it past everyone who could squash it in Marvel, because it may mean they didn’t even consider the fact that The Falcon is a black superhero; he’s just a superhero in their eyes, and occasionally, superheroes get set on fire (Right? Actually, now I’m having a hard time thinking of one). That's how I'm going to imagine this cover coming about anyway, because any other scenario is just too depressing to contemplate. 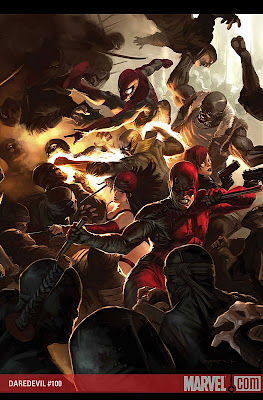 
This looks great. Well, actually, it sounds great. I don’t much care for the look of it. I do like all of Marko Djurdjevic’s previous cover work, but that costume looks an awful lot like the maroon leather costume Ben Affleck wore in Daredevil, and if there’s one thing I like to avoid, it’s being made to think of the movie Daredevil. Note who’s providing one of those variants. Why, it’s Michael Turner. Thank God that guy’s getting more work these days. 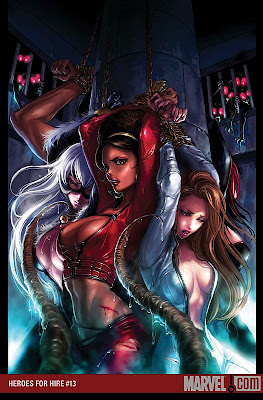 I love breasts. And I love tentacles. But for some reason, I don’t much care for them together. Perhaps it’s the whole helpless women about to be groped by slimy tentacle-having alien thing of some kind.

This had damn well better generate at least as much controversy as the MJ comicquette (at least within the comics blogosphere; I doubt anyone outside of comics will care, since it has nothing to do with a character who's now a household name like Spidey's girlfriend Mary Jane) because, if not, then Dirk Deppey wins.

Oh, and before I forget, nice touch with the sticky liquid splashed all over Black Cat's breasts. Classy. 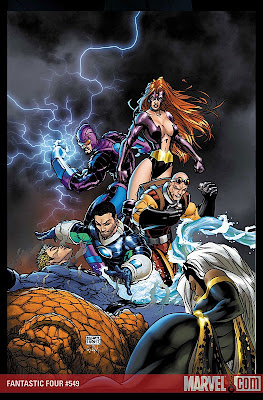 Okay, come on now guys. Enough’s enough. Just what do I have to do to avoid seeing a fucking Michael Turner cover every week? Just tell me what I have to do to make Turner’s cover art go away and I’ll do it! Do I just have to drop the title? Because I’d really hate to. I’m totally digging everything beneath the covers but, Jesus, a guy can only take so many images of poorly rendered characters with bad anatomy posed in backgroundless space hiding their feet, you know?

Soooo, what do you suppose Storm’s resting upon in this image? 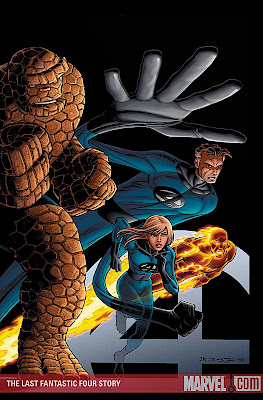 Hey, why can’t we get this guy to do Fantastic Four covers from now on? Look, he can draw feet! And when he sets his characters in a bacgroundless setting, he applies a sense of design to the thing so that you don’t really notice, instead of just a random wash of color effects to fill in the white space. 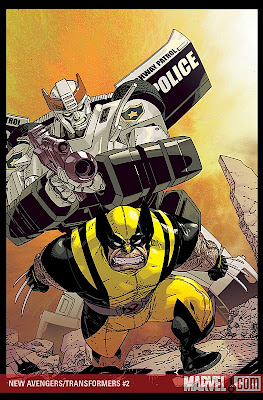 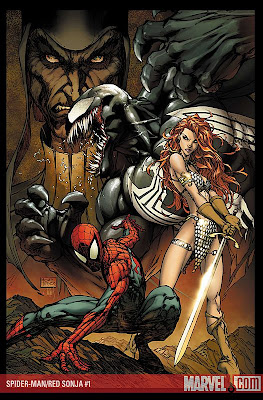 Holy shit, feet! Looks like I spoke too soon. 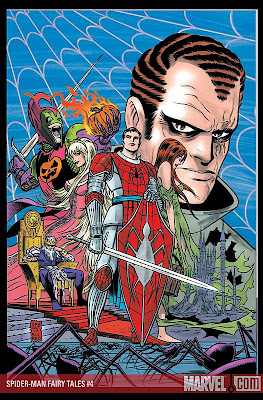 SPIDER-MAN FAIRY TALES #4 (of 4) Written by C.B. CEBULSKI. Art and Cover by NICK DRAGOTTA & MIKE ALLRED. You've never seen a Cinderella story like this one! In search of a husband for Princess Gwendolyn, a costume ball is thrown for the suitable young men of the Kingdom, but when the mysterious Spider Prince arrives, that's when the trouble begins. Who is this noble knight no one has ever heard of? What grudge do the soldiers in the Goblin Brigade hold against him? And just why does this dashing Spider Prince need to depart before midnight? Will he fall victim to a pumpkin bomb?


Hm, on the one hand this sounds completely retarded. But on the other hand, is there anything better than the Nick Dragotta and Mike Allred team? I think I’m going to have to think about this for a while. Good thing I won’t have to actually decide for three months yet. 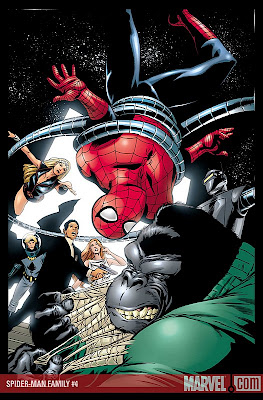 SPIDER-MAN FAMILY #4 Written by JEFF PARKER & CHRIS GIARRUSSO. Penciled by LEONARD KIRK & CHRIS GIARRUSSO. Cover by LEONARD KIRK. Peter Parker has a wonderful evening lined up for Mary Jane that starts with a horse carriage ride to a popular Broadway show. But then the stage magic becomes terrifyingly real and it's Spider-Man who has a date– with the secret super team known as The Agents of Atlas! Also, an all-new Mini Marvel tale, and classic Spider-Man tales!. All that plus Spider-Man J!


Look Marvel, you might as well just go ahead and green light an Agents of Atlas series. Because Jeff Parker’s just going to go ahead and keep on writing them everywhere he can anyway. (And I’m okay with that). 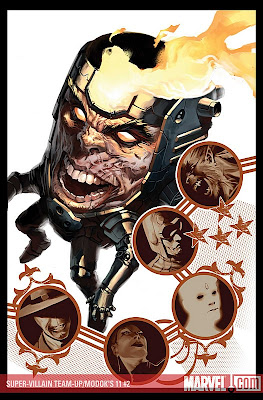 SUPER-VILLAIN TEAM-UP/M.O.D.O.K.'S 11 #2 (of 5)
Written by FRED VAN LENTE
Penciled by FRANCIS PORTELA
Cover by MARKO DJURDJEVIC
M.O.D.O.K. reveals the target of his heist to his handpicked team of Marvel's Most Wanted: the most powerful weapon in the universe, one that threatens the existence of all life on Earth. Meanwhile, Mentallo has figured out that one of M.O.D.O.K. 's team is actually a hero in disguise. (You'll never guess who it is!) Will Mentallo sell the rest of his teammates out to the authorities for some quick cash? Do you even have to ask? Let the backstabbing begin!

Also, who’s that pilgrim-looking guy? Because he looks awesome.


WISDOM: RUDIMENTS OF WISDOM TPBWritten by PAUL CORNELL. Penciled by TREVOR HAIRSINE & MANUEL GARCIA. Cover by TREVOR HAIRSINE. Pete Wisdom has a lot of fairies to kill. Yes, fairies are supposed to be nice and magical and charming, but they are currently attacking England. Hugo Award nominee Paul Cornell (BBC’s Dr. Who and Robin Hood) brings you a sci-fi mini-series unlike anything you’ve seen before! Collecting WISDOM #1-6.


Has anyone read this? What’s the verdict? The premise sounds neat, but I was kinda trade-waiting it on account of not knowing anything about the character or creators. The fact that it changed art teams midway through, and I’ve yet to 99hear anything about it, positive or negative, kinda worries me.


Are there any two words in the English language that sound like they belong together less than “essential” and Dazzler.

I may not get to this for a while, since I’m way behind on my cheap black and white phone-book-sized reprint collection reading, but this is definitely going in the queue. Not a bad list of contributes either. 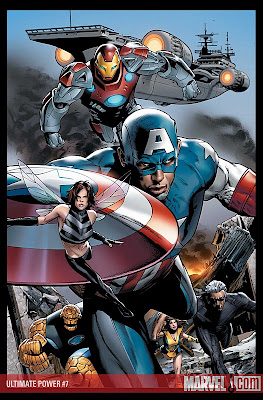 Hey look, it's a Greg Land cover! And look, his Wasp doesn't look much more Asian here than she did during Ultimate Fanstisc Four, when he gave her soulder-length brown hair and made her a white woman because either a) he had no idea who he was drawing or b) couldn't find the appropriate photo-reference. At least this time he gave her black hair. That's a bit closer.

Oh, and yesterday's post about DC's solicits? Take a closer look at that Robin/Argent cover, and who's responsible for it. That's right, an honest-to-goodness Greg Land drawing!
Posted by Caleb at 6:46 PM

At a guess, Marvel have to publish something called "Super-Villain Team-Up" from time to time or lose the trademark (as Fawcett/DC did with "Captain Marvel" as a title).

Though whether it's a trademark worth keeping is another question.

1) Ultimate Wasp is Asian? When did this happen? Seriously. I have Ultimates 2 13 on my desk and looking through it I don't see it.

B) Give Wisdom a shot. It makes no sense but it's well written no sense and the artist switch at least had a decent reason behind it.

AGENTS of ATLAS. With SPIDER-MAN.

Yeah, she's always been Asian. Except that one time Greg Land drew her. I don't have the issue out, but very early in the run (which feels like 1994 or so, but can't be), they're all sitting around talking about who should play them in the Ultimates movie, and someone suggest Lucy Liu play her, and she's like "Yeah right, cause all Asian women look alike" or something.

"Has anyone read this? What’s the verdict? The premise sounds neat, but I was kinda trade-waiting it on account of not knowing anything about the character or creators. The fact that it changed art teams midway through, and I’ve yet to 99hear anything about it, positive or negative, kinda worries me."
Paul O'Brien over at X-Axis really seems to like it.

I quite liked Wisdom. Not being conversant with the character, I was able to ignore what is apparently a not-quite-canon portrayal of him, it has the most amusing Skrull I've ever come across and one of the heroines is from our own fair shores (never enough Northern Irish people in comics).

No Dazzler looked better than a Vince Colletta Dazzler, that's a fact!