The late Jerry Falwell has said a lot of ignorant, irresponsible, reprehensible things during his life. Probably the most reprehensible thing I've heard him say was regarding the September 11 attacks, where he immediately sided with the hijackers who carried them out, saying that the death and destruction was God's punishment for America's perceived cultural immorality.

And whenever I think of Falwell, I think of his brief appearance in J. Michael Straczynski, John Romiat Jr. and Scot Hanna's Amazing Spider-Man #36, the issue that dealing with Spider-Man's reaction to 9/11.

The narration refers to "self-serving proclamations of holy warriors...who announce that somehow we had this coming," leading to this very panel, featuring JRjr's version of Falwell, spouting a version of his infamous quote: 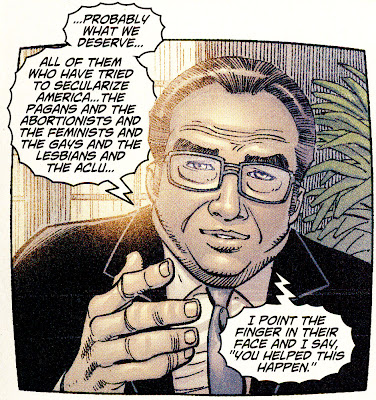 What really underscored the, well, evil of this statement is that elsewhere in the book, Straczynski checks in with some of Marvel's most nefarious villains—The Kingpin, Magneto, Doctor Octopus, Juggernaut and Dr. Doom, all of whom the narration tells us are sickened by the cruel barbarity of the attacks: "Because the story of humanity is written...in the voice that speaks within even the worst of us, and says This is not right.. Because even the worst of us, however scarred, are still human. Still feel. Still mourn the random death of innocents." 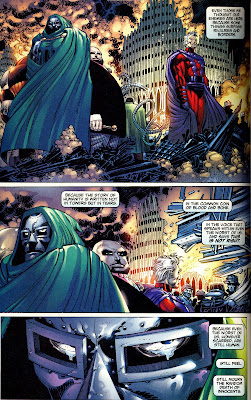 So what does that make Falwell—worse than the worst of us? I mean, just how evil do you have to be to come out of a comic book looking less decent, human and noble than a supervillain whose name is Dr. Doom?
Posted by Caleb at 10:03 PM

Two things, one comic book-related, and one not.

1. I love the fact that these world-class villains reacted more humanely than Jerry Falwell did... not that anyone should be surprised. Even Dr. Doom was moved to tears. (off-topic: this is one of the biggest reasons I didn't buy Black Adam's descent into genocide. He is basically the DCU version of Dr. Doom- superpowered ruler of a foreign country who is seen by the world as a base villain, but who considers themself to be virtuous. Once BA became just another guy that murdered millions of people, the character stopped being real. He had never displayed anything even remotely that evil before. I refuse to believe that this was character development.)

2. Check out the Teletubbies reaction to the death of Jerry Falwell. It's good for a chuckle.

I don't know a whole lot about this Jerry Falwell chap (probably as I'm from the UK) but from what I've heard he was not exactly a nice person.

However, while Falwell was a complete moron about 9/11, lets not forget Doc Ock has held New York hostage, the Kingpin used Nuke to destroy Hell's Kitchen, and as for Doc Doom, the ultimate terrorist... that scene really pulled my out of the comic.

The scene with Falwell really would have been far stronger without the super-villain bit (well, it would have for me)

Personally, I think Falwell was the worst kind of human being in existence, someone who fostered and fed the hatred and violence on others for personal gain, and tried to look virtuos in the process.

Whatever hell he's spending eternity on right now, it's not enough for the guy.

About taht specific comic, I could totally see Magneto in there, as he's not the "mad world conqueror" type of villain, but someone who's fighting to protect his people, only without the scruples of a Charles Xavier.

I could even see the Kingpin in there.

However, adding Doc Doom really was stretching it too far, IMO.

Dr. Doom is generally written as a man who is evil because he must be. He's a man who feels that no one else is competent enough to rule, and so he will do what he is forced to do in order to control the world (despite his nasty temper). In his new country of Latveria, Doom often hurts those who disobeys him, but anyone who dares touch one of his citizens gets a laser to the face.

Magneto is a character who feels he is locked in a holy war. He believes that the only way to bring peace to mutantkind is to remove regular humans from power. He believes he must bring war in order to finally have peace.

Those two villains have a lot in common with each other - they have a twisted sense of virtue. Contrast that with Falwell - who had no use for peace, no use for empathy, not even in a twisted manner.