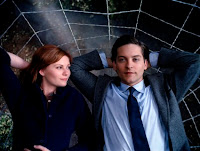 Regarding the former, it seems I may be just about the only film critic in the country who really loved Sam Raimi's third swing at Spidey. Maybe I'm exaggerating a little, but if so, it's not intentional, and only stems from my not having read every single Spider-Man review in the world. Of the critics I regularly read though, the reviews seems to run from mixed to negative. As IMDB.com's "Studio Briefing" for the day put it, "Spider-Man faces three villains in his new movie, but he's facing a lot more in the film section of your local newspaper."

For the most part, I've understood where a lot of (the better of) the critics who have disliked it are coming from, and yet, I've gotta say—Batman Forever, people! Superman III, dammit!

Of course, as Las Vegas Weekly critic Mike D'Angelo makes clear in his review, it's not only superhero franchises which tend to suffer in the third installment, it's action franchises in general: "This is the point at which folks start tossing out goofy ideas like, 'What if his dad turns out to be James Bond?' (Indiana Jones and the Last Crusade) or 'Maybe Richard Pryor would attract a whole new demographic' (Superman III) or 'What the heck, let's just kill off almost everyone from the last movie in the first few seconds and start from scratch' (Alien 3)."

Regarding tomorrow's holiday, I'm afraid I might end up missing it completely, due to my work schedule. (If any publishers or shopowners want to send me some freebies, however, the address is up in the righthand corner there; I'd really like the one in the picture). There certainly seems to be a ton of great offerings this year, some of which I ran down previously here. Also, be sure to check out Living Between Wednesdays' insightful rundowns of two FCBD books, Little Archie and Mickey Mouse here.

I'd like to take this opportunity to state for the record one last time that DC giving away JLoA #0 on FCBD? Absolutely retarded.

Contrast it with Marvel's Dan Slott/Phil Jimenez Spidey book. The audience for the day is newbies, an audience likely consisting of three major demographics: kids, grown-ups who are interested in comics but not addicts and people who already read comics, but maybe not one company or one publisher's particular comic books. If any of these dig the Spidey book and want more Marvel Spider-Man comics, shopowners can easily send the kids to Marvel Adventures Spider-Man digests or singles or Spider-Man Loves Mary Jane digests or singles. If they're adults new to comics and mainly interested in Spidey from the movies, there are a ton of Ultimate Spider-Man trades to suggest. And if they're hardcore readers of supehero comics already, just not Spider-Man ones, well, there's the Marvel Universe Spider-Man. If they're like, "Wow, this writer rules, have any more by him?" then shopowners can push a Spider-Man/Human Torch digest their way.

Now if someone reads and enjoys JLoA #0 for some odd reason (it's basically a clip-show, consisting of clips that never happened, haven't happened yet and, in some cases, never will happen, drawn by an all-star cast of artists), and they want more, what can you offer them? If they just like the idea of the Trinity or the Justice Legue, there are trades galore. But if they like this Meltzer chap's writing, well, there's the continuity-heavy Archer's Quest, the conitnuity-heavy Identity Crisis (featuring a controversial rape scene, ethically repulsive behavior by our heroes and a cover-up by our heroes), or the first eight issues of JLoA, featuring a long, drawn-out, extremely violent storyline revolving around many characters whose heyday was in the late '70s/early '80s. Those are three of the last story arcs I'd reccomend to people who haven't been reading DCU comics for 10 to 40 years already.

But no one at DC ever asks my advice on these sorts of things.
Posted by Caleb at 6:23 PM

Regarding the quote from Mike D'Angelo: isn't Indiana Jones and the Last Crusade sort of the exception to the second sequel rule? Granted, including Indy's dad as one of the main characters is high-concept, but as I recall it was much better received than its predecessor, Indiana Jones and the Temple of Doom . By the fans, at least.

I know Last Crusade is pretty popular, and generally more well-liked than Temple, but not here at EDILW HQ--I think Temple of Doom is the greatest acheivement of human civilzation.