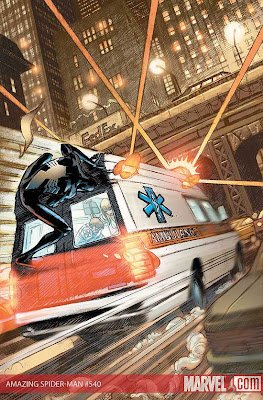 The Amazing Spider-Man #540 (Marvel Comics) Batman, is that you? A dark, grim, gritty superhero finds himself pushed to the edge when a loved on is murdered, and he beats his way through the underworld—even pulling the classic throw-the-dude-out-a-window-and-then-catch-him-at-the-last-minute-with-some-kinda-rope gag—eventually breaking arms and promising to kill the archvillain ultimately responsible.

I’m having a hard time picking my favorite line from the thing. Here are the candidates:

2.) “The dealer said Jake had friends in high places, that he was connected. Untouchable. Well, he’s about to GET touched.”

3.) Wilson Fisk answers the phone and says, “Well, hello, Mr. Parker. And what may I do for you?” To which Peter responds, “Just one thing, Mr. Fisk. You can die.”

Ugh. On the positive side Ron Garney’s pencil art is as strong as ever, and I like it more and more each issue. Also…um, no, I guess that's all there is that's remotely positive about this issue. I think I’m going to go re-read that Free Comic Book Day Spidey book to wash the taste of this out of my brain.

Okay, it’s a little wonky seeing Gravity and the de-Deathlok-ed dude appearing in the Baxter Building along with the new FF, with T’Challa holding some kind of big-ass magic yellow frog, and then seeing nothing more of the “two guests" mentioned in the rest of the issue (That’s Dwayne McDuffie’s story over in Fantastic Four).

The rest of the story deals with that giant bug man guy from the Negative Zone, stomping around the Baxter Building and eating all the wood it can get its four hands on. It’s a nice, fun clobber-filled FF story, with the best art I’ve seen on BP since John Romita Jr. ended his too-short six-issue run (Courtesy of Francis Portela and Victor Olazaba…any chance we can get them to stick around a couple of issues now?)

From the pages of 52, Nightwing, Flash: The Fastest Man Alive, Ion, Brave New World, Teen Titans, Green Arrow, The Flash and Trials of Shazam!, it’s the first issue of DC’s next year-long, weekly epic. And that right there seems to be the problem. Holy crap is this stuff confusing, revolving around characters straight out of the most ill-considered DC stories in memory (Resurrected Jason “Red Hood” Todd, fresh from “Titans East” Duela Dent, post-Trials Mary Marvel, the on-again off-again Flash rogues).

Now writer Paul Dini seems to have gravitated to such trouble spots in recent DC storytelling for a reason, as there’s a point where two Monitors have words with one another, and a rogue one says he’s eradicating "vermin," the “world-jumpers, the death-cheaters and the other criminals who defile the multiverse.” (Judd Winick, Brad Meltzer and Greg Rucka better hope our Earth doesn’t have a Monitor of its own then…nyuk nyuk).

So is this going to be a year-long story fixing all the ill-considered, poorly-written stories of the past few years? As nice as it would be to have Winick’s Marvel Family redesign or Todd resurrection undone, I don’t know if I necessarily want to spend 52 weeks and over $150 on the endeavor.

As for this issue's plot, Darkseid promises another universal reboot (DC, you do realize these things get less exciting each time they happen, right?), and then we journey to Earth to see Duela Dent, returned to a life of crime as if she didn’t just join the Teen Titans last week, being pursued by the Red Hood, now acting like a superhero, as if he hasn’t murdered a bunch of dudes in the past year or so (He even hands a hostage over to a policeman). And then Duela gets iced by a rogue Monitor, because you can’t have a big event without sacrificing a character to the gods in the first issue, I guess.

While the Joker’s Daughter isn’t exactly a character anyone’s going to miss terribly—which renders her death kind of inconsequential—on one level it’s something of a shame (The things Dini could have done with her!) and on another it hardly matters. I mean, I saw Jason Todd beaten within a millimeter of his life, exploded, buried, and residing in heaven over the course of 20 years or so, and there he is. Meanwhile, Hipployta and Ice have returned to the land of the living in the last few months, in fairly arbitrary fashions.

Now, I’m not going anywhere—I mean, we haven’t even gotten to the Jimmy Olsen yet—but where 52 started off with a bang, Countdown kicks off with a whimper.

I think I’ve gotten to the point with JLA:C where I could just start cutting-and-pasting reviews from one month to the next. This is part of story arc originally intended for release before the title even existed, it’s pleasant enough but not great, it’s nice to see Wally West as the Flash and Martian Manhunter on the League and the latter not wearing pants and doing his best Skrull impression, it feels weirdly disconnected from every other DCU story , blah blah blah.

Things worth noting? I have absolutely no idea where the League is hanging out throughout this story…I assumed it was an abandoned Ivo or Amazo lab, but they’re still there days later, so I don’t really know. I guess it's the Watchtower? Has Carlos D'Anda read any previous issues of JLA featuring the Watchtower? Can someone get the man some art reference or soemthing? John Stewart calls Batman “Bruce,” so apparently it’s not just Brad Meltzer anymore…I look forward to the day when the Dark Knight quits wearing a costume altogether and just fights crime in his tailored suits. And that’s totally Amazo posing as J’onn in the last scene…look how pointy his ears are. You’ll have to get up pretty early in the morning if you want to put one over on me, Amazo.

More of the same, which is fine with me, as the post-Civil War version of this title has been well-laid out and illustrated by Leinil Yu, featured an interesting mix of characters, boasted nice, snappy Brian Michael Bendis dialogue and moved much more fleetly and gracefully then the pre-CW version. The most notable story point this issue is probably the identity of the new Ronin, which is hardly a shock at this point (It ain’t Captain America, who’s dead, which leaves that other Avenger who changes costumes rather frequently). Bendis writes a nice scene in which Tony Stark doesn’t seem like a total douchebag (can’t remember the last time I saw one of those), and if I had any real gripes with the issue, it was simply that it’s hard to reconcile the happy go-lucky Spidey hanging out with his friends here with the Dark Knight version of him whose aunt is in a coma and whose wife is homeless and on the run over in Amazing Spider-Man (The difference is especially remarkable when both books are released in the same day, and one reads them back to back, as I happened to). I suppose I should just quit reading one of the two titles to solve that particularly problem, and ASM seems like the easiest drop at this point, being the worse of the two.
Posted by Caleb at 7:53 PM

I look forward to the day when the Dark Knight quits wearing a costume altogether and just fights crime in his tailored suits.

For some reason that line made me bust out laughing at work. Thanks!

Ah, but Caleb, Countdown points out she's a "world jumper" from another Earth. That means that we have other Duela Dents out there somewhere.

Welcome to the new "Superboy Punch".

It occurs to me today that maybe that whole scene wasn't even on our Earth. Like, Duela was a villain in it, and Red Hood was more of a hero-hero than a villain-hero.