It's been said that the Internet is like high school, and, if that's true, that means this is like my second time in high school. And this time, I want to be popular, damn it! And if that means doing what all the cool kids are doing, up to but not including jumping off bridges, well then, look out bandwagon, because I'm jumping on!

For eleven weeks now Bahlactus has been ordering comics bloggers to fight one another for his amusement. If you've been to any comics blog beyond EDILW, you've seen some of these epic throwdowns before, and know that they're known as Friday Night Fights.

Well, this Friday night, the EDILW is ready to join the battle. Because no one kicks ass quite like Batman, that means that any fight in which Batman gets his ass kicked is pretty much a guaranteed awesome fight, right? Which is why our first foray into the fray will be a Batman beatdown, provided by none other than Slade Wilson, the hard-ass with the dumb-ass handle of "Deathstroke, The Terminator." 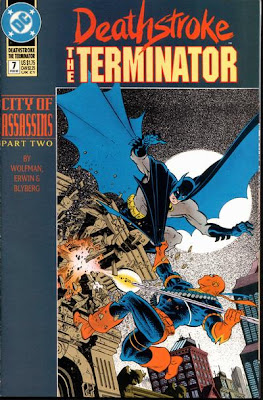 Now, 'stroke has been dying of over-exposure lately, popping up in somewhere beteen six and ninety-one different comic books every single week between Identity Crisis and Infinite Crisis. During that time, Geoff Johns, Judd Winick and others have reduced Wilson to just another supervillain, a weirdo with weird motivations working with other villains like those in Alexander Luthor-pretending-to-be-Lex-Luthor's "Society."

Familiarity has bred ineptness in Wilson, and these days he's likely to be deafeated one-on-one by Oliver Queen (Ha! Like that would ever happen!) or engage in The Worst Plan In The History of The Supervillainy in Teen Titans (Say you buy the motivation for his machinations in "Titans East;" did he really need to brainwash Batgirl, find and recruit Match, Inertia and the rest, build an evil version of Titans Tower and fill it with statues commemorating past Titans' greatest defeats?)

There was a time when Wilson was just a mercenary with a dumb codename and an awful costume. When he wasn't a bad guy, just a bad man with a bad job. He wouldn't go out of his way to kneecap Kid Flash, he'd just do what he was hired to do. He was even something of a hero—well, an anti-hero—coming to the aid of Superman and the other heroes during world-threatenting crises and getting along famously with the likes of Hawkman.

He didn't hit it off so well with Batman though, at least not at first, which lead to them fighting. Now, everybody knows that Batman could beat up just about any normal person in the DCU (excepting Lady Shiva, Batgirl and, I don't know, maybe Richard Dragon and Connor Hawke). Not only is he a huge man, a great fighter and a complete lunatic, not only is he a dirty fighter, but he's loaded with high-tech gadgets and weapons designed to hurt you from the bat-shaped treads on his boots to the tips of his pointy ears.

But he's still just a man. Wilson is pumped full of a super-soldier serum which makes him a Captain America-level physical specimen, complete with a healing factor that has even brought him back from the dead. In a fair fight, he could mop the floor with even the best fighters in the world, because in addition to being a swell-fighter himself, dude's metahuman.

This is the first time I ever saw he and Batman go toe to toe, and I think it's their definitive fight. Sure, neither is really into it. Bats just wants to talk to Wilson, and Wilson just wants to escape, but they still hand one another one hell of a holy beating. The fight spills over a five-page sequence in Marv Wolfman, Steve Erwin and Will Blyberg's story "City of Assasins" (Deathstroke: The Terminator #6-#9).

It was pretty strange reading today. Not only because of how different this Deathstroke is from the one I was just reading a few weeks ago in Teen Titans, but because of how good the story is. The fight is only five pages long, but there are dozens of panel. The fight is full of blows thrown, taken, dodged, parried, blocked and countered. The flow of the action is natural, with one move flowing into the next (Sure, they get off a little more dialogue than is realistically possible during various actions, but that's a convention of comic book time passage that tends to improve rather than detract from action scenes, as it forces you to spend more time in the panel, as The Absorbascon pointed out when declaring decompression it's mortal foe). And good God, just look at that architecture!

And no, "City of Assassins" is not collected in trade. And yes, you should seek out the back issues. Click on the pages to make them bigger, and don't lean in too close, or you may get some Batman blood in your eye. 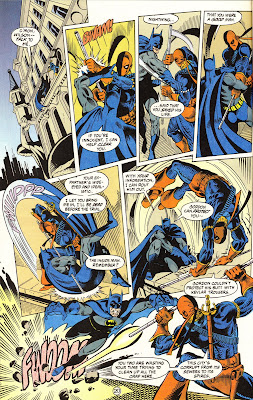 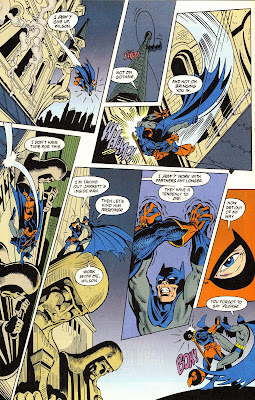 This is the point in the fight where Batman apparently decides he's not going to get anywhere talking to Wilson. It's almost like he flicks a mental switch from "Reasonable But Forceful Empathy and Persuasive Rhetoric" to "Sarcastic Remarks Accompaned By Kicks in the Face."

I think Deathstroke really hates being kicked in the face, because here's where he starts to lose his shit a little and, if he wasn't a decent and honorable man (and Batman not such a valuable character property) he might have killed Batman right then and there. 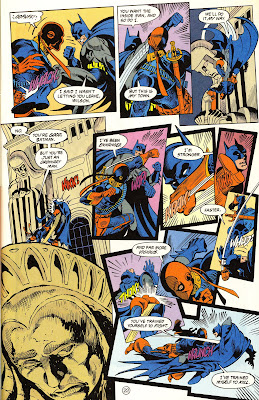 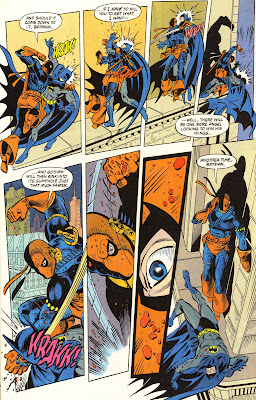 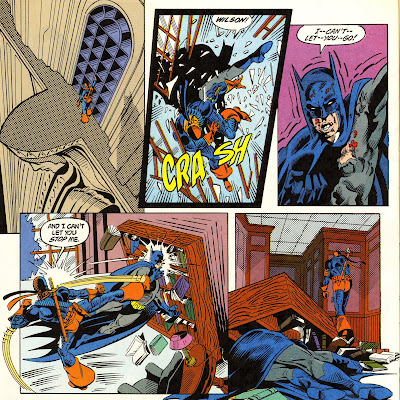 No one, but no one gets a second wind like Batman does. One minute he's unconscious and being pulped, the next he's on his feet, swinging through the air and kicking dudes through windows.

It was all for naught though, since one final kick from Deathstroke was all it took to KO Batman.

Speaking as someone who owns every issue of Deathstroke's series... I miss the days of him as a complicated character. I miss them a lot.

I agree that it's a shame he's moved from sorta-honorable mercenary to out and out Generic bad Guy, but maybe the big picture of his development shows what happens when you start cutting moral corners. You can't toy with villainy and stay clean; at least that's one way to look at his change of motivations.