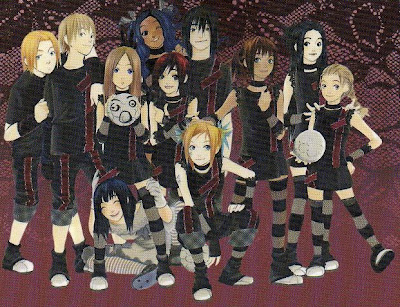 In other, less self-promotional news…

—This post on Scans_Daily reminded me just how much I loved the relationship between Superman and Batman in Trinity, and how adding Wonder Woman to the mix really changes the dynamic between the two. They really oughta just cancel Superman/Batman (a mercy killing at this point) and let Matt Wagner do a Trinity ongoing.

The link has scans of two of my favorite scenes, Batman yelling at Dick Grayson in front of Superman, and Superman talking about how he sees all of Batman’s silly tricks before he pulls ‘em out, but lets it slide because it makes Batman happy to think he’s surprising and impressing him.

—So that Mary Jane “comiquette” thing? Forget my existential agonizing prompted by Dirk Deppey’s piece at Journalista. Turns out he was wrong and all the online complaining is accomplishing something. Not changing the direction of mainstream super-comics or anything like that, but the mainstream media is now apparently covering the kerfuffle. Outside of Spidey movie stuff (which is probably driving mainstream interest in the comiquette controversy to a large degree), this is the most mainstream media coverage Marvel’s garnered since Cap got capped, right?

—Any Eric Powell fans who slogged through this week's long-ass installment of “Weekly Haul” might have noticed that there was no review of Satan’s Sodomy Baby, or Satan’s $@#%* Baby, as the shipping lists and outer cover refer to it.

Why no review? Well, it’s a long, uninteresting story. Which I will now proceed to tell you.

I actually forgot to pick it up Wednesday. I blame my local comic shop. They used to shelve all the new books of the week on the back wall, the entire cover of each and every book clearly visible, in alphabetical order. Even with this very consumer-friendly layout, I would occasionally still forget books, particularly Ultimate Spider-Man, Runaways and New Avengers, since the covers remained pretty much unchanged form issue to issue (And I’m dumb).

The store was fairly recently redesigined with a new new book layout, and now I tend to forget books on a weekly basis. The whole left wall of the store is lined with tiered shelves, in which new books are shelved along with books from the last several weeks so, for example, the latest issue of Amazing Spider-Man is just above last month’s issue and the issue before that too. The way the shelves are set-up, you can generally only see the top parts of each book. There are little orange placards behind each book notifying you that it’s a new book, but it’s a lot of visual information to scan, and little to go on, making it less than browser-friendly.

That’s also why last week’s “Weekly Haul” didn’t mention that Jeff Parker and Mike Wieringo’s Spider-Man and the Fantastic Four #2 was pretty awesome (I loved the “Daredevil’s all bumpin’ into things” line), and Wednesday's didn’t contain a review of Satan’s Sodomy Baby.

And speaking of which...

The book came pre-bagged, with a generic black cover featuring a big, long South Park-style “Warning” that functions as both an actual warning and a joke, and the title changed to Satan’s $@#%* Baby.

Flip that bad boy over, and there’s the actual title—Satan’s Sodomy Baby—on the actual cover, which features a really nice Powell cover with absolutely nothing objectionable on it (Well, the stuff that the titular character is covered in might be objectionable, but, without reading it, one won’t know for sure what the material actually is; it could just as easily be blood or mud as…anything grosser). The title page and the small print also use the Sodomy title. So that’s apparently the title.

Soooo, why the “$@#%*” did Dark Horse retitle the thing? “Sodomy” is not a swear word; it’s an extremely old term that is incredibly loosely defined to the point that it refers to pretty much any sexual act that isn’t penal/vaginal. “Sodomy” doesn’t mean “ass-rape” or “butt-fucking;” a blowjob administered to a man from a woman, is also defined as sodomy by some parts. I could see being cute about the name of the book if it were Satan’s Ass-Rape Baby or Satan’s Butt-Fuck Baby or just plain old Satan’s Fuck Baby (which is what I actually assumed the title was when I first saw those swear-word symbols), but “sodomy?”

It just seems like an overly squeamish response, trying to preempt a modern day Wertham from freaking out should the book somehow find it’s way into a child’s hands (Like kids go to direct market comic book shops and buy comics! The industry wishes.)

Oh, and pet peeve—There are six letters in “sodomy” and only five symbols in “$@#%*”; I suppose there’s no rule regarding this, but I like when the letters and symbols correspond, so that you can figure out what the swear word is. But maybe that’s just me. See, to compare it to a bleeped-out swear word in an audio or audiovisual media, not having them match up is like bleeping out the “-uck” ane leaving the “fuh-“ (or, starting the bleep too early), you know?

I probably wouldn’t have bought this book at all due to my irritation with Dark Hors'es embarrassment about publishing it at all (I certainly wouldn’t have made a special trip back to the shop today to pick it up) if I didn’t review comic books for a living (Well, 1/3 of my living, anyway…if you could call this living. [Sorry, that was a bad joke even by EDILW bad joke standards]).

Full review next week, but it is full of Powell’s usual nice art and lots of funny sentences. And if you buy one book just for the boobs this week, make yours Dark Horse, True Believers! At least Powell draws nipples on his topless women.

—Damn it. I just realized I didn’t get X-Men First Class Special this week either. I forgot to get it on Wednesday, just like Satan’s Sodomy Baby. I went back to the shop today to pick up SSB and I forgot to get the First Class special again. Arrgh.

—DC announced two 52 related trades Thursday at Newsarama.com (and I don’t know, maybe elsewhere too.) The new J.G. Jones cover for the trade is decent, but not as good as some of the 52 covers he’d done. And what the hell is up with that Entertainment Weekly blurb. “As addictive as any good TV series” is the best they could come up with? I know I’ve said much kinder things about it both in LVW and here (What do you mean EDILW isn’t as well-known and well-respected as EW?).

Two companion volumes were also announced, a $20 hardcover collection of Jones’ covers, which is a little more than I was expecting, but I feel obligated to buy it, having asked for just that for about 52 weeks straight. The other is a very, very weird one: 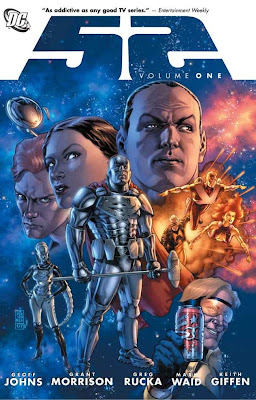 I’m just about curious enough about these issues to look them all up on comics.org, but as far as I can tell they appear to be a collection of key issues from the various players in 52’s fictional careers. It sure looks like the most random collection of comics stories ever assembled, and the title is a little goofy. I think I already have most of these stories, but it may be worth checking out .

I’m a little surprised there hasn’t been a Secret Origins trade announced yet, collecting the back-ups.


—Finally, speaking of Newsarama.com, Countdown editor Mike Marts tells Matt Brady that the fact that Jimmy Olsen knows the secret identities of the Robins is a plot point, not a mistake. Uh-huh. Then why doesn't Jason Todd act surprised when Olsen calls him "Mr. Todd?" The 'rama interview sound a litle like someone who trips and then says "I meant to do that," but not in a deadly serious way, and then follows it up with, "And if you get to know me better, perhaps you'll come to understand why I tripped on purpose."
Posted by Caleb at 6:22 PM

There was a Newsarama interview with Eric Powell a while back. He explained that the word "Sodomy" had to be taken out for export reasons. There's no way that most other countries would let a book with "Sodomy" in the title through customs, and Dark Horse felt that it would be a legal danger even to try.

Sure, it's ridiculous that that would be necessary. But it sounds true to me.