Slade Wilson isn't the only one who has handed Batman a severe beating. Being one of the world's greatest martial artists, wearing a belt full of bat-shaped anti-personnel weapons and being a bit of a psycho, a bit of a dick and a bit of a cheater may be enough to make the Dark Knight the king of most hills, but whenever he ventures outside his own weight class, he increases his chances of getting his spandex-clad ass beaten.

And you don't get much more out of Batman's weight class than Etrigan, the Demon.

I'm not sure if or when the two caped Gothamites found themselves at odds prior to tonight's fight, but I know they've crossed paths repeatedly since, and, as far as I know, this is their best battle (and all around best story). It also happens to be one of the best Batman stories I've ever read. And one of the best Etrigan stories.

It comes courtesy of Alan Grant, who, I've recently learned, was writing Etrigan for the very first time (Grant would go on to write him a lot more, when DC launched a Demon monthly with Grant in the writer's chair). His portrayal of the yellow-skinned, flame- and rhyme-breathing demon hewed close to that of Alan Moore's version of Etrigan in Swamp Thing, only rather than a sort of buddy-cop team policing the borders between hell and earth, Grant presented Jason Blood as a brooding, conflicted, cursed man, and Etrigan as completely mad—a pretty scary proposition considering his powers.

The art is provided by Norm Breyfogle, whom I consider the definitive Batman artist. Breyfogle found the perfect balance between the realistic portrayal of Batman as a normal man in a costume and the more expressionistic, symbolic/iconic take on the character as a mysterious, almost supernatural creature of the night. Breyfogle's Batman was recognizably human in his expressions and musculature, but his cape and cowl would flare out menacingly and blend into shadows to reduce Batman into a pair of angry white triangles and a set of sneering teeth when he needed to be scary. There have been so many great artists to handle Batman over the years that picking a "best" seems foolish, but I don't think anyone has accomplished as much characterization through the imagery alone as Breyfogle has; certainly not within the last few decades.

It probably helps that the Grant/Breyfogle team was together for so long—From their run on TEC through Batman and then their own Shadow of The Bat, and a handful of specials. Was there a writer/artist team on the character for that length of time before? There certainly hasn't been since.

Breyfogle's style is as well-suited to the Demon as it is to Batman, for the exact same reasons. His Etrigan seems physically real and unreal at the same time, and his bearing whips from mischeivous to noble to horrifying from panel to panel, while remaining consistently the same character (Breyfogle would again draw Etrigan in the Anarky miniseries, also written by Grant).

It goes down in the last issue of three-part story "Tulpa," which ran from 1989'sTEC #601 through #603. Some criminal types have been shaking Gothamites down for protection money, and one of their targets turns out to be an occultist who summons a demon to protect him, and, like most demon summonings, things go awfully awry—the four-armed, axe-weilding, crown-skulls-wearing giant calling itself Mahakala is too much to control, andit soon starts cutting a bloody swathe through Gotham.

Batman goes to Jason Blood for help, but Blood's all like, "What? No way am I summoning Etrigan to fight that guy! That's like fighting a grease fire with a forest fire!" (I'm totally paraphrasing, by the way). So Batman soldiers on solo. When our fight begins in TEC #603's "When Demons Clash!", Batman has already gone a few rounds with Mahakala, "The Great Black One-- The Angry Destroyer!", which accounts for his battle-damaged look (You know Batman's been getting his ass-kicked when he loses an ear from his cowl.)

Just as he's about to take a battle axe to the face, Etrigan swoops in and saves the day (Blood had caved), making short, short work of Mahakala.

It's worth noting, for our purposes here (i.e. watching Batman get beat down) that Bats is therefore going into this likely weary and a little wounded. So while Batman in top form probably couldn't hang with Etrigan's inhuman speed and endurance, super-strength, flame-breath, energy bolts, magic and poetry, a tired-out, roughed-up, one-eared Batman doesn't have a prayer.

Etrigan's in the middle of gloating over the pile of ashes that was until recently Mahakala, when Batman rolls up to thank the heroic demon and shake hands (Grant's Batman is a little serious and driven, but he's not a sociopath social incompetent). Click on the images to read the dialogue, and better appreciate the unbridled awesomeness that is Breyfogle's Batman. 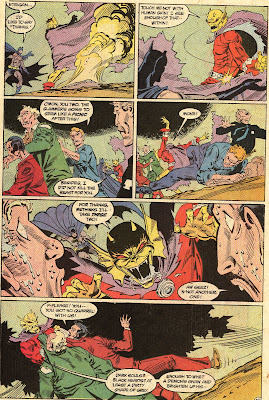 Etrigan's not here to save Batman or shake hands though, he's here to eat bad guys. 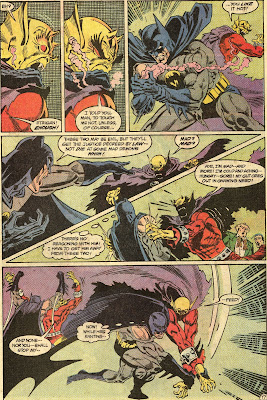 Batman steps up and sets a stern hand on his shoulder, but instead of pulling a Hal Jordan on Batman, Etrigan just free-styles a rhyme while his skin burns through Batman's glove (no one talks shit like Etrigan!) Note an art mistake in above panel—Batman places his right hand on Etrigan's shoulder, but is then shown clutching his burning left hand.

Demon or no, Batman isn't letting anyone get away with murder (unless it's Jason Todd or Cassandra Cain; Batman makes exceptions for people he's personally trained when it comes to getting away with murder). So it's time for a judo throw into a pile of cinder blocks. 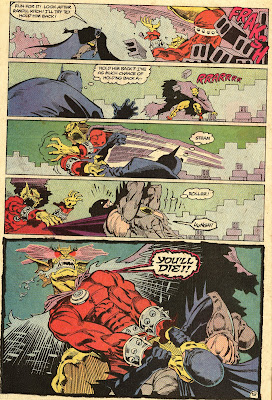 What a great page. See how elegantly Grant and Breyfogle detail Etrigan's speed in relation to Batman's—he clears twenty yards in the space of a second, and we get one word thoughts in each panel, to place further context for the rate of the actions. Wow. And that face...see how quickly Breyfogle has Etrigan's face twist from "Did Batman just throw me into a pile of bricks for some reason? That's rather irritating" to "GAAAR! DROOL! FOAM!" 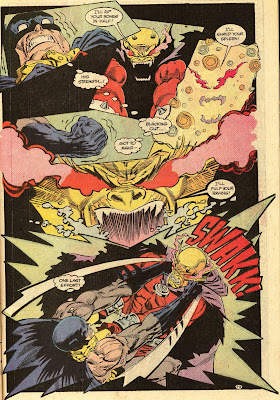 This is another great page. Note how the panels are starting to reflect the action. While the first scenes of their encounter are rigid, straight and formal, now they grow angles and shift perspectives—the page is falling apart and slipping towards oblivion, just as Batman is.

He summons his waning strength for one last strike because if Batman's going out, he's going out with a double-barrelled ear boxing. 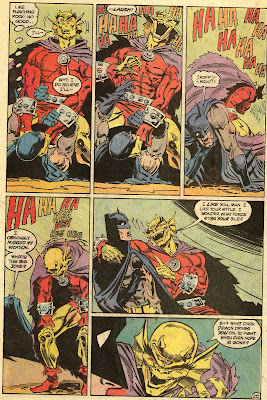 Batman's blow accomplishes his goal, but in an unpredictable way. Etrigan finds it so adorable that Batman would even try punching his way out of the situation that Etrigan just cracks up at the thought. This leads to my second favorite Batman panel of all time, wherein Etrigan throws his arm around Batman to tell him he likes his style, and Batman is just completley bewildered. 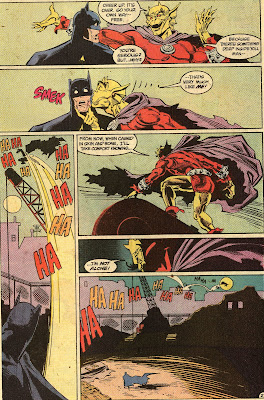 And there's my first favorite Batman panel of all-time. The one in which Etrigan concludes their conflict the way a raving lunatic from Hell might—with a smek.

In fact, that's so awesome, let's see that again: 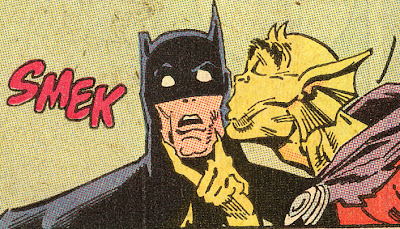 Recognizing that Bruce Wayne, like Jason Blood, has a demon living within him, Etrigan sees the Batman as a kindred spirit and spares him, forefeiting the fight.

I can't get over that kiss, or the look on Batman's face! Amazing!

That wonderful, brilliant kiss panel and the couple panels before it (starting with Etrigan's goofy "did you... just punch me... in the ears?" look of surprise) made me realize how much Etrigan is really just a psychotically evil Dr. Seuss character. How can I never have read this issue??