You can't win 'em all, even if you're Batman, and you therefore win about 99-percent of 'em.

In our ongoing efforts to chronicle the best ass-kickings that Batman, one of comicdom's premier assk-kickers, has endured, we've previously seen Deathstroke totally take him apart, and watched Etrigan, The Demon beat the hell out of him. Clearly Batman has a little more trouble dealing with metahumans and supernatural beings than your plain old regular joes.

There is one regular joe who has suceeded in taking Batman down, however—one Joe Dredd.

It happened in this comic book, 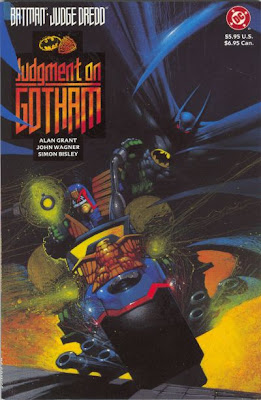 1991's Batman/Judge Dredd: Judgment on Gotham, which was written by John Wagner and Alan Grant, and fully-painted by Simon Bisley.

This is Fourteen-Year-Old Caleb's favortie comic book, and even Thirty-Year-Old Caleb still sees a lot to like about. It's significant for several reasons. Personally, it was my fourth Batman comic and my first Judge Dredd comic. Less personally, it was the first of the three prestige-format comic book meetings between Batman and Dredd, and the only good one.

The plot involves Mean Machine Angel coming to Gotham City via somekind of teleporting maguffin machine. Judge Death follows him, and meets up with the Scarecrow, and it takes the combined forces of Batman, Dredd and Judge Anderson to settle the villains' collective hash.

They come into conflict immediately, and, unlike 'Stroke and Etrigan, Dredd drops Batman without even exerting himself at all. 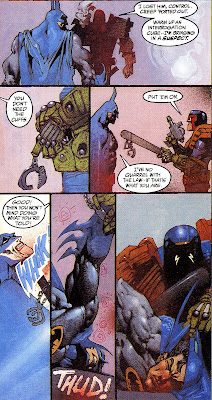 Oh my God! Did you see that?! One hit! He knocked Batman out with just one hit! From conscious to unconscious and unmasked in the space of just three-panels!

Now, Dredd may be as human as Batman, but he's no slouch when it comes to beating people up. While he doesn't have any superpowers or robot parts in him, he was born and bred specifically to beat up lawbreakers. Still, taking Batman out in one panel? Pretty damn amazing.

Now to be fair to Batman, this did occur at a point in his career when he was quite used to working with law enforcement officials, so chances are he had his guard down and wasn't expecting that nightstick to the head.

Later in the same book, he does punch Dredd in the face and knock him on his ass, and even has a sweet moment where Dredd's like, "Assaulting a judge, that's ten years!" and Batman responds curtly, "Make it twenty" while kicking Dredd.

Of course, while Batman does knock Dredd down with one hit, he doesn't knock him out. And it was something of a sucker punch, since Dredd was arguing with another character when Batman hit him. So we may never know whom could take whom in a fair fight (Unless that's settled in one of the two sequels to this story, whcih I've completely forgotten the contents of, on account of them not being very good).

But for now, let the record show that Judge Dredd once totally beat down Batman.
Posted by Caleb at 11:12 AM

Nice to see old joe getting some recognition

In reference to Bat-man?!
I was eating stir fry for chrissakes....

"Of course, while Batman does knock Dredd down with one hit, he doesn't knock him out."
Well, he hit Dredd in the chin. Have you seen that thing? You'd need a damn sledgehammer to damage it.

Having said that, I'd probably call Batman the odds-on favourite in a fist-fight between the two. Always suspected he was a better skilled fighter.