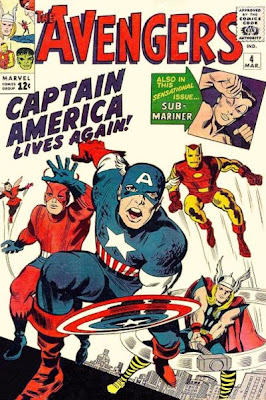 AVENGERS CLASSIC #4 Written by STAN LEE & DWAYNE MCDUFFIE. Penciled by JACK KIRBY & MICHAEL AVON OEMING. Cover by ART ADAMS. Captain America may be dead, but witness his classic rebirth into the Marvel Universe in "Captain America Joins…the Avengers!" -- a tale destined to become a magnificent milestone in the Marvel Age of Comics! Witness the tragic death of Bucky and the triumphant return of the Golden Age’s greatest hero in an instant classic that could only be told by legends Stan Lee and Jack Kirby! Plus: take a new look at the ultimate man out of time, as writer Dwayne McDuffie (FANTASTIC FOUR) and artist Michael Avon Oeming (POWERS) craft an all-new 9-page story starring the one-and-only Captain America!

I’m curious to see how long Marvel will let McDuffie write these Avengers back ups (not to mention Fantastic Four). If he doesn’t leave the book, under whatever circumstances, would that make him the first writer to handle both the Avengers and the Justice League simultaneously?

“In the tradition of Spider-Man: Regin,” huh? Does that mean we can expect Cap’s super soldier serum tainted semen to have an unexpected effect on Sharon Carter? 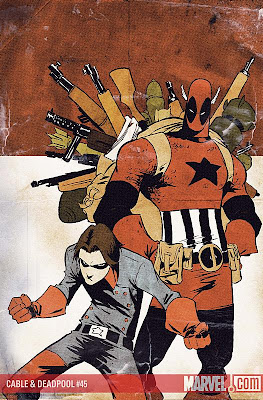 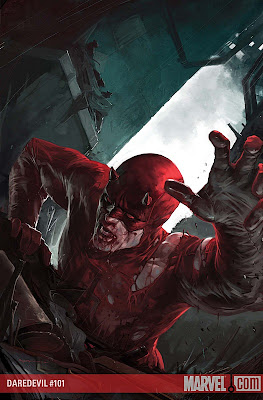 I love Marko Djurdjevic’s artwork. I hate his version of the Daredevil costume though. 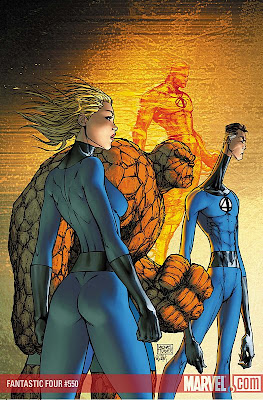 Sill no feet or backgrounds, but Michael Turner’s FF is definitely improving. Thing’s jaw looks like it belongs on his face now, for example, and the elongated torsos he so loves actually works pretty well for someone whose powers include the ability to elongate his torso to inhuman proportions. 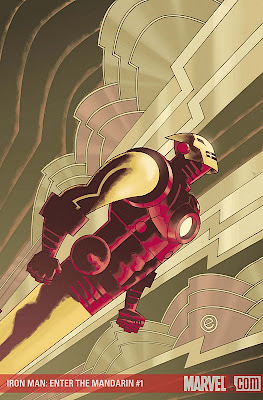 I won’t buy this series, not caring that much about Iron Man, but that is a really nice cover, isn’t it?


IRREDEEMABLE ANT-MAN #12 Written by ROBERT KIRKMAN. Art by PHIL HESTER & ANDRE PARKS. Cover by PHIL HESTER. FINAL ISSUE! The story of Eric O'Grady comes to an end--or does it? Who lives, who dies, who gets double-crossed? The answers to these questions and many more in this final issue of the series everyone who read loved! So get your 'Save Irredeemable Ant-Man' campaigns ready. Hey, it worked for Runaways and She-Hulk. Why not Ant-Man?


Nooooooooooooo! Well, the writing’s been on the wall for a while, and, as the clever solicitation copy itself notes, there’s always hope that this book’s cancellation will be more She-Hulk than The Thing. At the very least, I hope Eric O’ Grady sticks around the Marvel Universe, complete with his ant-suit. It’s the best Ant-Man costume design yet (I know that’s not saying a whole lot) and he certainly makes crowd scenes look cooler. 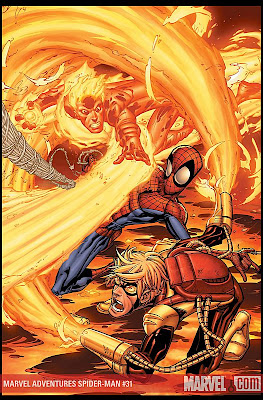 MARVEL ADVENTURES SPIDER-MAN #31Written by PETER DAVID. Penciled by POP MHAN. Cover by PATRICK SCHERBERGER. HOT HOT HEAT!!! Spidey gets caught in the crossfire of the Human Torch AND Pyro! ONE hothead would be rough enough…but TWO? It’s Spidey flambé, brought to you by the one-two punch of David and Mhan!!!


Don’t worry about Friendly Neighborhood Spider-Man being cancelled Peter David fans. PAD’s still got one Spider-Man monthly, and this one’s guaranteed to be completely alternate universe Uncle Ben and bonde claw free! Nice to see the Spyboy creative team reunited, and I do so love me some Spidey/Torch crossover action. 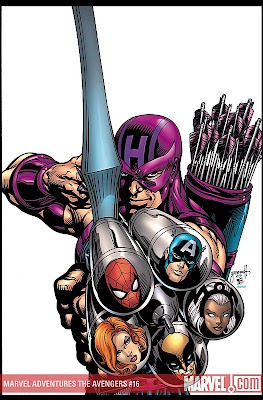 MARVEL ADVENTURES THE AVENGERS #16Written by JEFF PARKER. Penciled by CAFU. Cover by TOM GRUMMETT. Look, sorry pal- ow- but this isn't Robin Hood and the Merry Men- ow-ow-, this is The Avengers- ow! Hey, watch it with those thi- ow, ow, OW! Fine. What did you say your name was, Hawk-something?


How many times have I said this is the best and/or my favorite Avengers title? Fourteen? Fifteen? Well, I’m saying it again. I love this book. Heck, even the solicitation copy is fun.


MARVEL ZOMBIES: THE BOOK OF ANGELS, DEMONS & VARIOUS MONSTROSITIES Written by JEFF CHRISTIANSEN, MICHAEL HOSKIN, STUART VANDAL, CHAD ANDERSON, MADISON CARTER, DAVID WILTFONG, RONALD BYRD, ERIC J. MOREELS, ANTHONY FLAMINI & AL SJOERDSMA. Cover by GREG LAND. Think you know everything there is to know about the things that go bump in the night? Think again! Discover the events that led to the infectious Marvel Zombies. What does Belasco have in store for the X-Men? What is lurking in the unknown? Is it the Lurking Unknown or something worse? Think Set and Seth are one and the same? What is the most powerful black magic tome on Earth? What are the Azazel, Brain, Lord of Death and Voyager? Find out all of this and more as we explore the dark depths of the Marvel Universe and beyond – featuring Demons (a massive eight-page profile), Angels, Werewolves, Vampires, death gods Damballah and Pluto, and much more! Oh yeah, and did we mention Marvel Zombies?

Okay, I don’t get it. What the hell is this exactly? An Official Guide to the Marvel Universe style book of profile pieces, with the “Marvel Zombies” shoehorned in and added to the title to cash in on their unlikely popularity? Did I get that right? 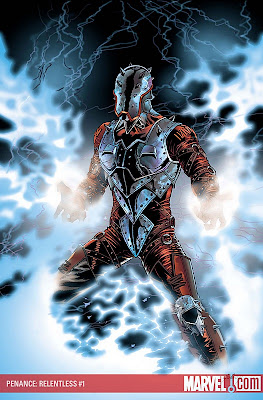 PENANCE: RELENTLESS #1 (of 5)Written by PAUL JENKINS. Pencils and Cover by PAUL GULACY. From the pages of Civil War: Front Line and Thunderbolts! Once he was a hero, now only a shell of Robbie Baldwin remains. As Penance, he begins a slow descent into madness: the most hated man in America, blamed for the disaster at Stamford, tortured by visions of his failure and obsessed with strange, seemingly meaningless numbers. A relentless pursuit begins...

Because no one demanded it! 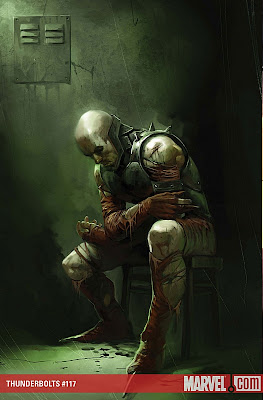 THUNDERBOLTS #117
Written by WARREN ELLIS
Penciled by MIKE DEODATO
Cover by MARKO DJURDJEVIC
"Caged Angels" continues as we delve into the psyche of the Thunderbolts’ most elusive member, Penance, the man formerly known as Speedball. While Thunderbolts Mountain remains in a perpetual state of discord, the greater chaos might be within Robbie Baldwin’s own mind! 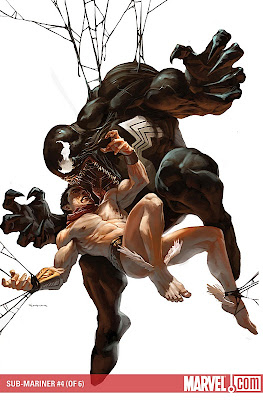 I’m trade-waiting the Sub-Mariner series, but that cover is going to be hard to pass up on the stands. 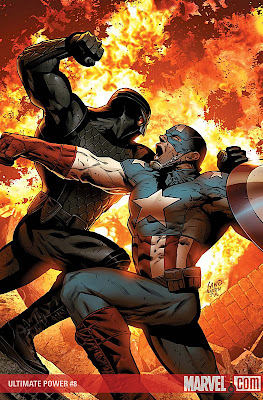 As much as I dislike Greg Land’s art, and I dislike it a little more every time I see it, do you know what I’d totally buy? A collection of Land covers and sequential pages, complete with the official photoreference he used in the creation of it. Kind of a behind-the-scenes book about Land’s process. I have a feeling it would have to be a Max book though.
Posted by Caleb at 10:52 AM

Re: Greg Land: check this out.

And as for Michael Turner, I'm trying to ignore him, but I have to comment that that FF cover bugs me due to the big thighs he always gives his women. Look at Sue, each of her thighs is almost as wide as her waist. And her right leg is in front of the Thing's, so at first glance, it looks really huge.