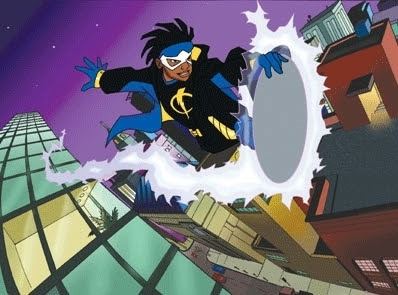 Congratulations on your new gig!

Even a few years ago, I probably would have greeted the news that Dwayne McDuffie was going to be writing JL(o)A with a "Who?" instead of "Woo hoo!" (despite having enjoyed so much of your past Milestone work, back when I didn’t pay much attention to the credit boxes).

But is it just me, or have you seriously stepped up your game lately?

As someone who doesn't really pay much attention to the names of television writers on shows I watch (I have no idea if you were the genius who had Flash-in-Luthor's-body not wash his hands after going to the bathroom because he was evil or not, for example), I'm not even referring to any work you may have done on the generally excellent Justice League Unlimited. I mean instead the last few issues of Firestorm (including the sublime Orion vs. Stompa fight), the wonderfully old-school Beyond! (which took a handful of characters I didn't care the least for and weaved a highly entertaining story around them), the tons of fun Fantastic Four and, hell, even last week's Avengers Classic back-up.

Now, from what Dan Didio has said, it sounds like you'll be whittling the cast of JLoA down somewhat, as it's rather large for your (or his?) taste. Which I was surprised to hear, seeing as there are only ten people in the League at the moment, eleven if you count Geo-Force, and the best runs on the team have been those with the largest casts (Giffen/DeMatteis had two teams spread over two books and a quarterly; Morrison’s team swelled to around a dozen).

While everyone has their own ideal League line-ups, I'll try my hardest not to bore you with mine here. I did want to share some advice with you, though. Not that you need it, but rather because if there's one thing we at EDILW like doing, it's sharing advice about Justice League comics that no one ever listens to.

So, regarding that line-up: It's integral to remember that the Justice League formula that works the very best is “The Big Seven” plus a few more. The Leagues that have worked the best financially and critically without that foundation of the Big Seven (i.e. the Giffen/DeMatteis run) did so despite rather than because of the deviation from the Big Seven plus more formula, and they did have the advantage of Batman going for them (If you're only going to use one of the Seven, that's the one you want, especially around the early '90s).

The argument is often made that it's hard to tell League stories with these seven characters because so many of them have their own books, or, in Superman and Batman's cases, whole lines of books, and will thus not only remain static but, if they're to change/develop at all, it will be in those books, not JLoA. To that I say: “So what?” JLoA doesn't need to focus on the superheroes as characters, but rather on the interaction between them. There are a lot of books about Batman, and one about Wonder Woman, but this is the only book about the Batman and Wonder Woman's relationship to one another.

Now, I understand the line-up you'll be inheriting is devoid of three of the traditional Big Seven (again, the fact that this is DC's bestselling book is despite rather than because the variation of the formula; I don't think anyone believes Geo-Force, Roy Harper and Red Tornado are more popular than Flash, Aquaman and Martian Manhunter, and the current line-up still has the three biggest of the Big Seven on it). Ideally, you'll want to add the Flash, Aquaman and Martian Manhunter as soon as possible, but that might take a while. We don't know who the Flash will be (Wally's an immediate in; Bart and Barry might want to wait a bit), Aquaman's dead for the moment and Martian Manhunter is more unlikable in his current costume and characterization than he's ever been.

So that gives us the Big Seven Minus Three, meaning you can add at least three. Roy Harper is a must-keep, if only because Meltzer made such a big deal about it, changing his name and costume to get him there. Black Lightning is also a must-keep; some of us have been waiting forever to get him there and, again, he just joined. Hawkgirl and Vixen both seem like good candidates for sticking around, in part because they just re-upped; the former is more iconic, but the latter is more unique. Tough call. 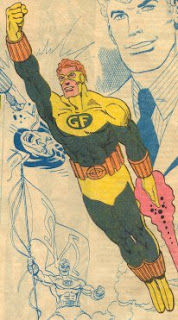 As for trimming, no one would mind if Geo-Force decided he didn't want to stick around after all. Seriously, I can't think of a single person in Internetland who likes Geo-Force, or at least hasn't made fun of him repeatedly. (Here are some of my favorite jokes at Geo-Force's expense).

Red Tornado is similarly annoying, particularly as Meltzer has written him, although he has a larger fan base (that is, he has some fans). I could take or leave him, personally; if he sticks around, I do hope you'll find an interesting way to write him. The whole Pinocchio Syndrome Android-with-human-emotions-who-wishes-he-was-real plotline has been something pretty much anyone who's ever touched Red Tornado and Marvel’s Vision has hammered on over the last, what, 30 years now? That’s kind of…tired.

Black Canary has fans and certainly belongs in the League more than Geo-Force, but, at the same time, I don't think she brings much of anything to the team. If they need someone to beat someone up without using superpowers for some reason, they could just have Batman do it. He loves beating people up. Her upcoming nuptials will give her a good excuse to step down for a while too, or put herself on reserve status, or maybe just be like the Phantom Stranger, and just show up when she feels like it or is really needed.

Which is the advantage of a gigantic line-up. The more people on the League, the better, even if we don't see them all the time. For example, I love Steel and, in a DCU that operates on a sort of logic beyond "That Which the Person Writing Likes Is What Is," I don't know why he would have quit the League after Morrison’s “World War III” or why no one's asked him to rejoin. How many brilliant inventors and super-engineers who can also catch falling jetliners and knock giant robots' heads off with their big ass hammers are there in the talent pool? And while the Trinity are all scientists, I think the League needs a dedicated tech guy. I'd be happy to see Steel on the team, even if he's only there doing tech support, monitor duty and joining them for, like, one out of every fifteen fights. I think that's how a lot of fans feel; they want their favorites in the League, even if those favorites don’t actually star in every single issue.

So big rosters are great, and, barring that, a large number of official reservists who occasionally guest-star and/or just check in is definitely the next best thing.

Oh hey, and the Green Lantern situation? Who should be the Green Lantern? It's Hal currently, which never made much sense to me. Though a founder, he was on the League less than Kyle and Guy. He was also evil for a long stint, so evil that he actually destroyed the universe temporarily, and even killed Batman temporarily before undoing all of creation (yeah, yeah a space bug did it; whatever) and he was a member of "The Power Pact" which was less than ethical (another strike against Canary, come to think of it), and his coming on seemed a little unnatural. I mean, they were just working with John, who was place-holding for Kyle, when Hal came in. Did they just fire John? Stop returning his calls? Was he so deep undercover as Hunger Dog that he couldn't join the new Meltzer-ized League? It should have been John, as we all know (Kyle's life seems even more complicated now then when he asked John to replace him, and the League needs a Lantern in it's line-up, not an, um, Ion…whatever that is exactly).

Of course, now the problem is that Hal's there, and they'd have to kick him out to make room for John. I'm not sure how to handle this, or how quickly it should happen, but I have faith that you'll find a smart, believable way to do it. John is currently the only book-less Lantern, and JLoA is the ideal place for him now. If Hal gets the monthly, Guy the Corps book and Kyle all the stupid Countdown spin-offs, then let's get John back in the League, huh?

Thanks for your time, and good luck.

Labels: correspondence, dwayne mcduffie, everybody loves geo-force, in which I tell talented famous people what they should do, JLoA