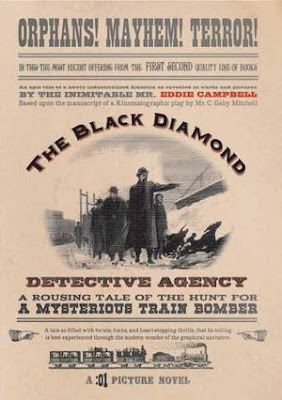 This week's LVW column features reviews of Black Diamond Detective Agency, Black Summer #0 and Death and the Man Who Would Not Die #1.

While you're at lasvegasweekly.com, you may also be interested in checking out Jeffrey M. Anderson's "web-exclusive" review of Fantastic Four: Rise of the Silver Surfer. Why's it web-exclusive? I imagine it's because they didn't screen the film until after the paper went to press, which is exactly what they did here in Columbus (the only local critic invited to a Tuesday morning screening was the critic forThe Columbus Dispatch, the local big, dumb daily paper; the rest of us had to make do with a Thursday night screening, which ended all of two hours before opening day).

So if you're wondering where my review is, or why this week's "Meanwhile" is posted on Friday instead of Thursday, it's because last night I was in a movie theater, slowly shaking my head while watching FF:RotSS, instead of infront of my computer reviewing and updating. I'll post a link later tonight.

Real quick on the Stupid Marvel PR Move of The Week: I didn't notice until Dirk Deppey posted the Suydam version right next to the original over at Journalista, but they did sex it up a bit, whether it was Suydam's initiative to remove a layer or two of MJ's shirts or Marvel editorial's request that he do so. Note the extra skin (of the non-decomposed variety) on the Suydam's version's hip. 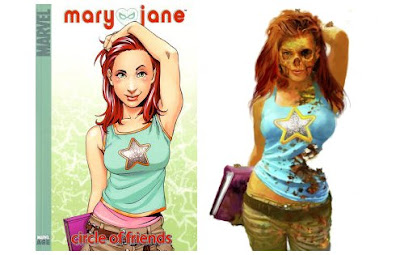 I have a hard time imagining the thought process that goes into these sorts of things. Like, I honselty just can't comprehend an editor firing off an email asking Suydam to zombify the MJ digest cover, but make it as sexy as possible. I know there are fetishes of all kinds of crazy varieties out there, but man, I always assumed the ones revolving around corpses were among the rarest, and the least likely to be catered to by a major comic book company.
Posted by Caleb at 2:36 PM

I loved Black Diamond Agency. I agree that some of the surface plot seemed too obvious (elements of the screenplay at its root, I assume), but Campbell really did a great job making it work on as a comic.