Like each of the previous three issues, there was a whole lot to dislike about this week's Countdown. This time out, a lot of it came on page nine, a brief five-panel scene between Donna Troy and Jason Todd that is breathtaking in the amount of continuity mistakes it manages to cram into such a small space.

Donna Troy is standing over the fresh grave of former Titan Duela Dent, The Joker's Daughter, and up walks former Titan and former Robin Jason Todd, who is currently a multiple-murderer and fugitive from justice, a walking threat to Donna's pal Nightwing's very existence as a costumed hero (not to mention Robin and Batman's).

Instead of smacking Jason across the cemetery or calmly asking him to surrender himself to the proper authorities, Donna just kind of chats with him.

Even if I wanted to be extremely generous with writers Adam Beechen and Paul Dini and assume that maybe Donna doesn't know about all the guys Jason has beheaded, and that she for some reason trusts him not to ever reveal Nightwing's secret identity to anyone, I still can't understand why she's not a little more pissed at the guy.

After all, as far as I know, the last time the two of them crossed paths was in this comic book 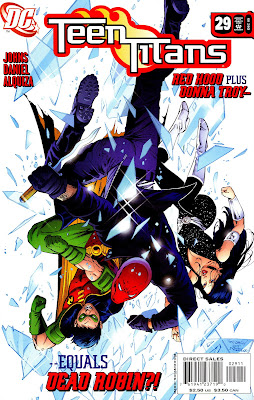 Now, it was a terrible comic book, probably the worst issue of Titans with Geoff Johns' name on it prior to "Titans East," so I can hardly blame Dini and Beechen for not wanting to read it.

In fact, I've tried very hard to block it out of my own memory because this issue, primarily because, in addition to containing Jason Todd (alive, aged, and evil), it also features an incredibly stupid scene in which he rips off his Red Hood costume 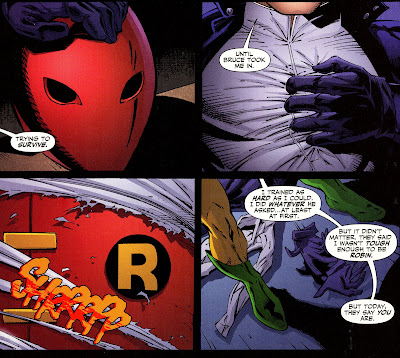 to reveal this costume 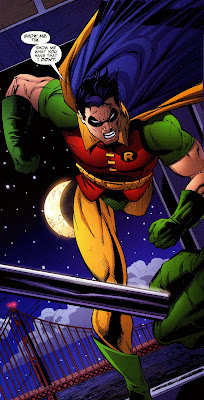 which he was apparently wearing underneath his Red Hood get-up...cape, gloves, boots and all.

But anyway, in that issue, Jason Todd broke into Titans Tower, gassed Raven in her sleep, shot Cyborg and Beast Boy with some kind of electricity-emitting darks that knock them both out, and then attacked Robin, beating him into unconsciousness and knocking down the Donna Troy memorial statue in the Titan's creepy Hall of Statues of Dead Titans.

Donna, who has arrived at the Tower in search of cannon fodder to take into her space battle against Alexander Luthor's giant space hands, is there when the team finds her nominal teammate Robin, 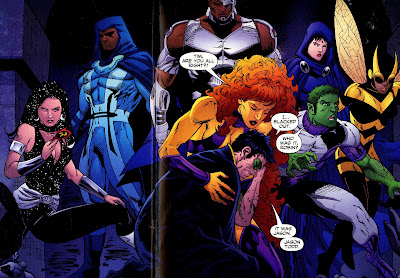 who tells them all that Jason Todd just did this to him.

So I gather Donna either has very bad short-term memory (this happened just before Infinite Crisis, so it was only about a year ago her time), or she really, really, really doesn't like Tim Drake.

That, or Beechen and Dini didn't read Teen Titans #29. Like I said, I don't blame them for not wanting to read it, and I'd excuse them both, if they weren't using both of those characters in this story.

Beechen is an even worse offender here though, since he took over Teen Titans from Geoff Johns. Apparently I don't understand what is involved with writing universe comics for one of the Big Two, but I always thought that part of preparing to take over as a writer for a pre-existing title included reading the previous issues.

I mean, it's not like Beechen was taking over Action Comics or Detective Comics here, where there are hundreds of issues featuring characters who have weathered thousands of appearances that no one could keep track of every single one of, but Titans was only forty-some issues old when he took over...that's an afternoon's worth of "research."
Posted by Caleb at 6:24 PM

lalala, it didn't happen! Any story from before 52 # 52 and IC#7 is now suspect, and can be discarded at whim. On New New Earth, post Mister Mind Munch, that duffel bag was filled with hubcaps, not heads; Jason came back as a troubled bad boy, not as a psychotic murderer. Doesn't make sense? Doesn't make any less sense than "Superboy punch equals resurrectionin the first place," does it? lalala!