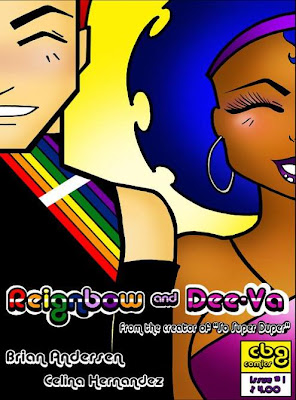 I used to think that Brian Andersen’s So Super Duper, his self-published book about a flamboyant and feminine super-hero doesn’t seem to realize the apparent fact that he’s gay, was the gayest comic book ever (Except Batman).

But now I’ve read Andersen’s Reignbow and Dee-Va, and it’s much, much gayer.

That’s probably in large part because our gay hero Reignbow actually knows he’s gay, so while some of his behavior tends to be just as, what’s the word…flaming as So Super Duper’s protagonist Psyche’s behavior, he also makes jokes, puns and innuendo with his boyfriend. And makes out with him repeatedly. And looks right at the reader while stroking his giant, Cable-sized gun after firing it and remarking that he’s spent.

But it’s also the way Reignbow jumps through skylights: See what I mean?

Anyway, Reignbow and Dee-Va opens in an alley, with the colorful crusaders talking about what sounds like a party of some sort.

What they find inside, however, are confused looking vampires in matching uniforms. This leads to a fight that dominates most of the issue, with the leads bantering, battling and busting out bizarre beauty products.

For example, Reignbow applies sparkly lip gloss before the fight (in a panel complete with the sound effect “SPARKLY!”), and Dee-Va deals with some vampires thusly: 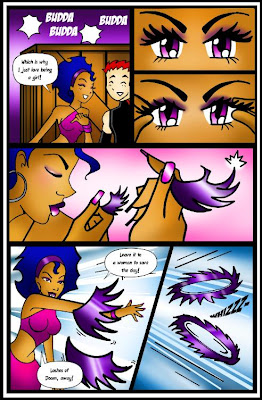 The very next panel shows two vampires having their heads CHUNK CHUNK-ed off by those buzzsaw eyelashes.

And here’s Reignbow wielding a whip that Dee-Va braided from her “100 percent steel-polyblend” wig in the space of, like, two panels: 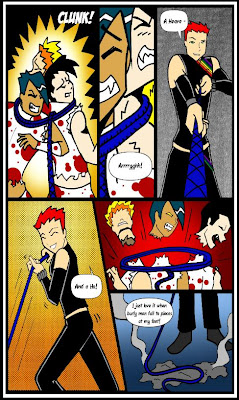 The art is by Celina Hernandez (Andersen draws his own So Super Duper) and it’s pretty good stuff.

There’s an obvious manga influence in the character design, and while the art is obviously simplified and occurring in a flattened out space, it’s not at all detrimental to the story, which is pretty much a string of silly jokes hanging on a fight/rescue plot. It looks and reads a bit like an ironically simplified and exaggerated Cartoon Network original show. Only with sound effects like “Splooge!” (it’s lip balm, I swear!) and a hero who shouts about how he hates pussy.

If this looks like something that you think might be up your alley, you can see a preview of the first seven pages and find out how to order it by visiting Sosuperduper.com.

And hey, while you’re there, why not buy a copy of So Super Duper #5?

*Full disclosure: Writer Brian Andersen contributes comics reviews to Newsarama.com’s weekly Best Shots column, as do I, and I wrote and drew a back-up story for his comic So Super Duper**.

**Speaking of which, So Super Duper #5, featuring a back-up Every Day Is Like Wednesday/So Super Duper crossover rather shoddily written, drawn, lettered and colored by me, is still available from sosuperduper.com for $4. That's just one penny more than Secret Invasion! Here’s a one-panel previw of it: 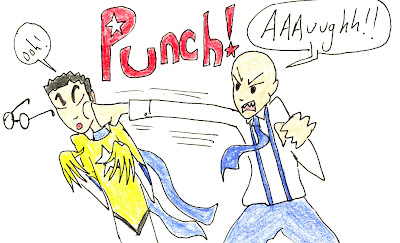 I still think Enigma is the gayest comic I have ever read.

I had to have sex with a woman after it to confirm that it had not turned me gay.

It's the eyelash weapons that sold me. SO brilliant.

I just ordered this comic. Can't wait to check it out!

Yay! Caleb's review is so totally super awesome I just can't stand it! I wish I was nearly as witty and hilarious as he is!