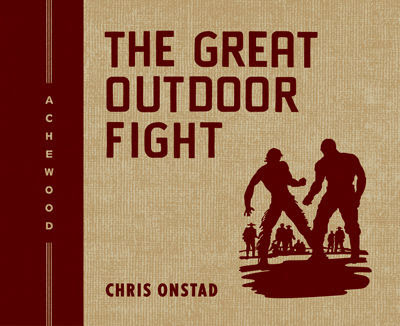 The undisputed champ of webcomics finally gets a hard copy version in this slick hardcover collecting the entirety of the 2006 arc about the titular battle royale, described thusly: “Three days! Three acres! Three thousand men! Only one will win.”

From a pure publishing perspective, it’s a really nice project. The book is more square than rectangular, a more individualized size than the standard graphic novel format, and its cover is austere, almost stately. There are a couple shades of brown emblazoned with the words “Great Outdoor Fight” and two silhouettes of men—not anthropomorphic cats or bears—apparently fighting before a crowd. Looking at this thing in the shelf, you’d probably have no idea what the hell it actually was.

The insides are the original strips, moved around a bit here and there so that the entire thing reads like a graphic novel, rather than a collection of comics strips. This is a great (and pretty obvious, although I never really considered it until now) advantage of web comics over their newspaper brethren: When they’re ultimately collected into a book, the format need not be so severe as a collection of newspaper strips.

Generally when I read strip collections—be they the gag panel kind or the sequential adventure kind—the books are necessarily assembled so that one moves one’s eye across the page like the roll on the back of a typewriter: Mechanically across the row of three to four panels in a set rhythm till you reach the end, and then your eyes travel back all the way to the left to start the process all over again. Maybe every two pages or so there would be a full-page Sunday strip to break the monotony.

Here each panel flows right into the next without the fact that this is a collection of strips ever even becoming apparent. This is in large part because Chris Onstad can make his daily strips as long or as short as he wants, rather than confining himself to the same number of panels in the same small space six days a week, with a larger, more square format on Sundays, as he would if Achewood were a newspaper strip.

As nice as this collection from Dark Horse is though, and as glad as I am to finally get a book version I can loan to friends to evangelize Achewood with, I still found it somewhat frustrating. Mostly in the way that Achewood remains Achewood, even on paper.

Firstly, I’m not so sure this is the best place to start getting to know the strip. Having read through the archives over the course of a few weeks online, the Great Outdoor Fight definitely seems to be one of the biggest and most action-packed stories, but a lot of the humor comes from just how uncharacteristic it is for our heroes Ray and Roast Beef to be involved in such a manly event, let alone excel at it. Hell, it’s hard to imagine either of them even getting in a fistfight, let alone ever succeeding in beating down 2,998 other dudes. I’m not sure either the drama—a kind of inside out ironic melodrama that is actually dramatic despite itself—nor the humor work as well if this is your first exposure to the two cats.

And there’s no real attempt made to introduce them either. I was somewhat bemused to see that among all of the add-ons Onstad makes to the book, including a history of the Great Outdoor Fight, profiles of past champions, and recipes, nothing is done to ease new readers into the world of Achewood; all of these things just makes that world more full, more realized and more hilariously deadpan.

There’s no key to the characters, no “Previously in Achewood” synopsis at the beginning, no afterword or foreword, not introductions or postscripts from Onstad or another cartoonist or celebrity endorser explaining just what the hell Achewood is.

Think of the first page of every Marvel comic book, for example, or the character charts that appear in some multi-volume manga series. That’s the sort of handholding I assumed would factor into an Achewood book like this.

Wait, I said this frustrated me, didn’t I? Maybe frustrated isn’t quite the right word; perhaps I should say it chagrined me—the connotations on that word are closer to what I mean.

See, here I was looking forward to a book that would perhaps make it easier to try and spread love for Achewood beyond emailing links to certain strips to friends, and when the book finally arrived, the spirit of the online version was completely intact: It’s something you can’t really have explained to you, but something that you have to just dig into until you reach the point where you decide, “Wow, this is not for me,” or you’re laughing your ass off and no longer care why it’s so popular despite the poor drawing, or why Ray is wearing a thong, or how come there are so many objects scaled to cat size.

And that’s actually pretty admirable on Onstad and Dark Horse’s part—even in a new format, they let Achewood be Achewood.

I’m extremely interested in how this ends up doing as a book, for a couple of reasons.

There’s the traditional “Will people pay money to own something they can look at on the Internet for free any time they want?” question, which I imagine the answer to will end up being yes. (In my experience, it seems that as long as the comics are good, I don’t think people mind buying them after they’ve read them online; it’s only shitty comics that creators and publishers have to worry about people never buying after they’ve read them).

There’s also the question of whether people who shop in book stores and borrow graphic novels from the libraries will embrace Achewood, or if there’s just something about it that makes it a strip enjoyed primarily by people who relate to it online, as a site and a community and an experience as much as a comic strip to be read.

And, of course, there’s the question of whether it does well enough to lead to more, similar books. If it were up to me, I’d like to see a Complete Achewood sort of program, but a story arc-focused publishing plan like this, in which the various big continuing stories each get the trade treatment, wouldn’t be so bad, either.

I think you get to know the characters best in a lot of the little standalone strips in which they talk about what they look at on the Internet or blog about their days or whatever, but because Achewood is a web strip, you can always hang out with and get to know the characters at achewood.com, so maybe the main point of Achewood books would simply be to relive the big moments, like Great Outdoor Fights, road trips, weddings, kidnappings and run-ins with magical realism cameras made in Mexico.
Posted by Caleb at 7:32 PM

Just bought and reviewed this book myself. And while it doesn't really TELL you who any of the regulars are I still found it pretty easy to get into. And I don't read or even like the webcomic. So I don't know how well it will work as a gateway to the online comic, but from what I recall from the few times I tried out the original, its probably the only story arc with any chance of converting the undecided...

Plus the whole tearing the dudes face off and the making of cowboy sauce are just bad-ass awesome...

We reviewed this over at FBB and it was the first time Jamaal had seen anything achewood like. He was up to speed very quickly.

I think Onstad did a great job of getting the characters personalities across even as they may play against their roles.

Due to the nature of the other back and front matter, I feel like a character sheet would have felt out of place here.

Interview of the author on how to write books Achewood: The Great Outdoor Fight and what in that book is not horrible. All about the second book and plans for the future psmotret interview here: http://tubedirect.net/index.php?q=Achewood:-The-Great-Outdoor-Fight-video
All recommend!