Kelley Jones often cooks up some pretty zany looking crime-fighting equipment for his Batman to use, from his pipe organ-looking Bat-computer to a zippy little go-cart of a Batmobile to a serpentine giant robot with Popeye-like arms. But I think this week's Batman: Gotham After Midnight #5 featured what may be Batman's most Seussical bit of gear so far—the Bat-Unicycle.

Check this thing out: 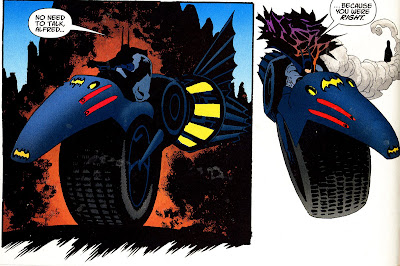 And here I thought the Bat-pod in Dark Knight was an odd-looking vehicle. This is just a cockpit on top of a single, gigantic monster truck wheel. Of justice.

And what's it take to power such a strange cycle?

Apparently some sort of rocket engine.

Man, that is one serious unicycle.
Posted by Caleb at 3:52 PM

what happened to the giant rocket mounted fin between panels?

that was the best part.

Okay, that settles it. Why the hell am I not reading this?

what happened to the giant rocket mounted fin between panels?

His cape ate it.

Now that I look at it again, all I can hear is the Jetson's spacecar noise as Bats speeds away.