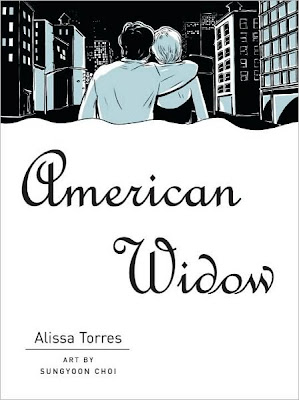 Circumstance gave so-called “Terror Widow” Alissa Torres one of the more heart-rending stories of the September 11 attacks. At seven-and-a-half months pregnant, she and her husband were facing rather dire financial problems when their luck seemed to turn: Eddie Torres scored his dream job with a firm based in the World Trade Center. His first day on the job was September 10, 2001, followed immediately by his last day on this earth.

Torres, who has since turned to writing as both as a means of personal therapy and public expression, has scripted a graphic novel memoir of her experiences, illustrated in delicate, emotive black, white and sky blue art by Sungyoon Choi.

It’s a tough book to criticize, due to the subject matter, but the fact is it’s not really a very good graphic novel. The art is superb, and Torres’ perspective is certainly unique, full of insights into the nation’s reaction to the tragedy that most of us would otherwise never see (Friends envying the financial support Torres got, the massive bureaucracy of institutions trying to help her, the exploitive nature of some of those trying to do the helping, her reaction to cartoonist Ted Rall's depiction of her and her fellow widows, etc.)

The individual moments of the narrative are each interesting and worth reading, and some of them have great power, but they never all connect into anything novelistic, graphic or otherwise. Large portions of the story seem missing, including almost any information about her child, and one of the more dramatic elements—an argument with her husband that they never resolved before his death—goes unexplained.

The result is a book that feels oddly unfinished; like an early draft for a potentially great graphic novel that accidentally got illustrated and published while the story was still in the works. It's well worth reading for what Torres offers, but probably not worth recomending too emphatically. I expect great things from Choi in the future, though.
Posted by Caleb at 2:39 PM

I didn't realize how addicted to your weekly reviews I was until now. I'm trying to peacefully watch some adult swim, and I find myself refreshing your page every 10 minutes or so to see if they're posted. I need help!

So, yeah, thanks for doing the reviews every week if I never mentioned it before. Apparently it's become part of my routine without me noticing.

Thanks for reading 'em.

Sorry for the delay this week; I worked my day job today (I'm usually off on Wednesdays) and spent more time than usual reading news between comics, trying to keep up with the crazy-ass developments of this presidential race.

They're up now, and likely more typo-riffic than usual, it being after 1 a.m.