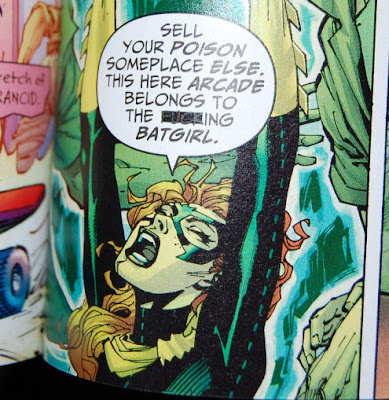 This week's new comic book day was haunted by the absence of a comic book that wasn't on the shelves like it was supposed to be, the greatest comic book currently being published in the United States and maybe—just maybe—the single greatest acheivement of mankind since the discovery of fire. I speak, of course, of Frank Miller and Jim Lee's All-Star Batman and Robin, The Boy Wonder.

The tenth issue was supposed to come out this week, and man, just seeing it's ridiculously long title show up on the Diamond shipping list last week filled me with joy. The last time we checked in with the Goddam Batman, he had painted himself yellow, made fun of Hal Jordan for ten pages, had Robin nearly murder the Green Lantern, and then the Dynamic Duo huddled together in a graveyard crying. How could Miller and Lee top that?

And then the news came: All-Star Batman wasn't going to be shipped to shops after all, and Diamond sent out an alert letting retailers know that DC was asking that any copies that do go out be destroyed.

As crushing as the disappointment of not getting to read an issue of The World's Greatest Comic Book Ever No Matter What It Said on Top of Fantastic Four In The Sixties was, the mind immediately began to reel. Why on earth was the book being recalled? Such things aren't unheard of, of course. DC did the same with an issue of League of Extraordinary Gentleman, in which Alan Moore used the word "douche," the most offensive word in the English language, and to an Elsewords special in which the indestructible Super-Baby gets into a microwave and remains unhurt because it wasn't a Kryptonite microwave.

Of course way back in that decade—um, last decade—DC still seemed to have publishing standards. That was before it became commonplace to see stuff like this in JLA comics, and Superman wouldn't appear on the covers of comics about brutal sex crimes.

But nowadays, what can't you have in mainstream DCU comics? Shameless upskrits of teenage girls Supergirl and Mary Marvel? Dr. Light talking about how he'd like to rape teenage super-girls? Dan Turpin calling The Mad Hatter an "asshole?" The Flash's goofy villains sniffing coke off of prostitues? Superboy torturing Mr. Mxyzptlk? Mary Marvel punching a dog's head off? All fair game.

And All-Star Batman is a book infamous for gleefully pushing the envelope to the trashiest places imaginable; it's kind of the whole point of the book. In the first nine issues we've already had Batman ask Robin if he was retarded, The Joker strangling a woman he's just had sex with, Wonder Woman calling a passerby a "sperm bank," Batman and Black Canary having illicit sex on a filthy dock after just meeting. What on earth could have occurred in the pages of All-Star Batman and Robin, the Boy Wonder that would have exceeded all that?

The answer turned out to be both more shockingly insane than I would have ever imagined and pretty disappointingly prosaic.

It was just some swear words, which is the disappointing part.

Granted, they must have been the "worst" swear words, like that one that begins with an f, for example, and maybe even the C-word or the N-word, because "goddam," that word that caused Cather in the Rye some of its problems so long ago, has been used in the first nine issues of this book more often than the words Gotham, Joker, Robin or batarang so far.

I know I've talked about swearing in superhero comic books a lot already, so maybe everyone's sick of hearing me go on and on about it. I should note that here I don't see any reason to really forbid swearing, Batman and Robin being present or no (The argument can be made that Batman is a franchise more comfortable with dark, adult themes than most other superhero books, and you need to at least be a teenager to be able to buy this erratically scheduled book anyway. I would hope no comic shop employeed would ever sell any Frank Miller comic to a child. Just stamp this thing "Mature Readers" and Batman can be the goddam motherfucking Batman).

The fact that I have talked about comic book swearing so much lately is precisely why I wanted to post this though. Yesterday The Comics Journal's Dirk Deppey discussed the issue, and he summed up the tension inherent in superhero comics using swear words a lot more elegantly than I had been able to in the past: "DC’s creators are allowed to walk right up to the edge of the figleaf, but the figleaf must be respected nonetheless...it’s why those black bars are placed over the offending words that Miller writes, large enough to cover the majority of the lettering while still small enough to allow a tiny percentage of a few descenders and edges of letters to stick out, so that one can be sure of the words being censored." (Go read Deppey's piece if you haven't yet; he offers a funny conspiracy theory, and reason why there's actually no conspiracy there).

In discussing various strategies of comic book swearing, I generally don't think the "redaction bars" that were being used in All-Star Batman are a very good way to go for most comics, especiall the main-line "universe" comics of Marvel or DC, but it works here, having the effect of a bleeping sound over Jon Stwart swearing on The Daily Show, or the kids on South Park swearing. Employed often enough, with sustained enough bleeps, the bleeps themselves become jokes, irrespective of what is being bleeped out. (I don't know what was being "bleeped" out in All-Star or how often things were; it seems pretty clear that Batgirl was declaring herself "The fucking Batgirl!", and that one of the bad guys called her a "jailbeat piece of ass" and maybe even referred to her as...John McCain's alleged pet name for his second wife).

Which brings us to the completely insane part, which Tom Spurgeon unfortunately already beat me to pointng out: DC prints the comic with all the swear words in the dialogue balloons, and then puts all the black bars on top of them?!

Spurgeon puts it thusly, wondering if there's a good angle for someone to follow-up on still: "[P]rinting a word and then putting a block over it is totally freaking weird beyond anything any of us has ever heard before and all other speculative threads should be stopped while we all sit around and marvel over the sublime goofiness of this practice. Is someone pulling our leg here? Because this sounds insane."

Yes, yes it does sound insane (Spurgeon then goes on to wonder if this means artists also draw Superman naked before drawing his clothes on. I'm torn on this; it wouldn't suprise me if some artists actually did draw the characters naked before drawing clothes on them—Carlos Pacheco did that with some of Khyber's courtesans that actually got posted on Newsarama.com as part of a story about his pencil art on Superman a while back, actually—but then, since no superheroine ever seems to actually have nipples on her breasts and so few heroes seem to actually have penises under their trunks, maybe they do just draw the clothes atop stick figures.

Anyway, I am no intensely curious as to how All-Star Batman and Robin, the Boy Wonder is lettered. Are there two letterers, one who puts down all the words and then one who covers up the offending ones? Do they print the actual words to make the redactions seem as perfect as possible? Would any three-letter word covered with a black bar look as much like "ass" covered with a black bar?

Spurgeon, Deppey, Newsarama, Comic Book Resources, someone get DC on the horn and ask them about this bizarre lettering practice, please.
Posted by Caleb at 6:16 PM

Come on, it's Superboy-PRIME that tortured that poor little imp. Let's not befoul the good name of Superboy (RIP)!

The practice of actually printing the fevered cuss words of Miller, and THEN putting a black bar over the top of them strikes me as being slightly insane. For one thing, it seems like a LOT of extra work, for no real reason.

I don't mind an occasional curse word, sometimes a hearty hell or damn is appropriate. When things get a little more hairy, the usual euphemism of @#$%$%# has always seemed reasonable...I'm sure that the average reader can always supply his or her own curses. Miller on the other hand, just seems to be going out of his way to be as offensive as possible. Is it really simply a game to hismm at this point? Seeing just how much DC will actually let him get awy with? Or has he completely lost his mind? Or a little of both?

Whatever, I imagine this is going to be a rather expensive lesson for DC to learn.

from the LA TIMES -

"I wrote the actual words in the script and had them put on the page so the black bars would be the right size on the page," Miller explained. In this latest issue, the bars are there but on a few you can read right through them; they're more gray than black. "It's a simple printing error," Miller said. "That's what it is."

YEah, J Dot beat me to it. Then again, the fact that it was lettered that way due to Frank Miller's insistence has been stated since the earliest postings about this on The Beat (which, I believe, was the first major site reporting it).

So that crazy lettering practice? Just another bit of Frank Miller craziness. Becomes a lot less interesting that way, since the guy is already certifiable.

So does Frank just not know how many letters are in the word "fuck"?

This still doesn't explain why it was printed in two stages. Even if the letterer is going to write everything and then add the censor bar, why isn't that printed all at once as one black image?

I smell a big hoax/publicity stunt on the AS Batman dirty words thing.

"And All-Star Batman is a book infamous for gleefully pushing the envelope to the trashiest places imaginable; it's kind of the whole point of the book. In the first nine issues we've already had Batman ask Robin if he was retarded, The Joker strangling a woman he's just had sex with, Wonder Woman calling a passerby a "sperm bank," Batman and Black Canary having illicit sex on a filthy dock after just meeting. What on earth could have occurred in the pages of All-Star Batman and Robin, the Boy Wonder that would have exceeded all that?"

Man. When you explain AS Batman like that...maybe it is pretty good???