Two quick questions about Marvel's living planets (Or: An excuse to post this crazy image of a Wolverine/Ego mash-up) 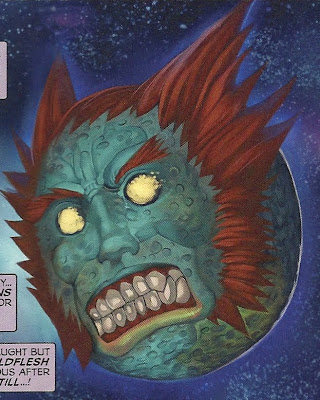 Above is "Sideburn, The Regenerating Planet," a brief fantasy that Galacta, the daughter of Galactus has about using the power cosmic to infuse Ego, The Living Planet with Wolverine's healing factor, resulting in a planet that she and her dad could eat over and over again without having to destroy worlds, as depicted by artist Hector Sevilla Lujan in Galacta: Daughter of Galactus #1.

I wonder, would Marvel's various space opera story lines like the Annihilation and War of Kings books sell even better if there was a planet version of Wolverine involved in them? (Or would they need a Deadpool, The Annoying Planet for the popular character sales boost that Wolverine used to bring to every book he appeared in?)

I was also wondering, upon seeing this panel, if Ego, The Living Planet had appeared in any of the various Marvel Zombies books, as a zombified living planet...like, Ego, The Undead Planet or The Unliving Planet or whatever? I assume he must have at some point, but I don't recall seeing it in any of the Marvel Zombies books I've read (I'm sure I've missed a couple of 'em though).
Posted by Caleb at 7:05 PM

Ouch. Had a lightspeed nightmare of what a horrendous life would be to be eaten over and over again. P.E.T.A should fight for the rights of that planet.

Maybe Zombie Ego was in the McDuffie run of FF? When they end up in the MZ universe where the "heroes" have gone into space after eating Galactus?

If not perhaps you should write Fred Van Lente and tell he has a new climax for MZ5...

Yeah, Ego appeared briefly in Marvel Zombies 2 (if I'm not mistaken). The Cosmic Powered Super Hero Zombies (wow, I can't believe I just typed that) are looking around the universe they ravaged for more food, and we see a panel of them eating a planet. One of them says "Man, I can't believe we didn't see it the first time around, a living planet!" or something to that effect.

Just a minor color change and you have a fairly accurate picture of Hank McCoy.