Hey, coma-ridden Dr. John Henry "Steel" Irons! Is there a Marvel comic you're looking forward to reading when you regain consciousness? 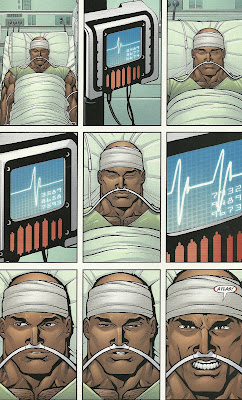 (Steel is so excited to read Jeff Parker, Gabriel Hardman and company's Atlas #1 that he fights his way out of a coma to do so in Superman #695, which was written by James Robinson and illustrated by Bernard Chang)
Posted by Caleb at 12:27 PM

Heck, I'm just glad to see somebody NOT die!

Is there a reason black people in comics are often colored so pale?

This is something that I've seen happen a lot. I remember back during Priests' Black Panther run, he did the story featuring a guy named Casper Cole taking on the Black Panther mantle after finding the costume. It was a plot point that Casper (as indicated by his nickname) was a very light-skinned black man, while his father, "King" Cole, was very dark skinned, but when they appeared in the same scene they both appeared to be kind of beige.

And the most recent issue of Blackest Night makes Ronnie Raymond's Firestorm look darker skinned than Jason Rusch. It just seems really weird to me.