Not comics: Rick Spears' illustrations for Tales of the Cryptids 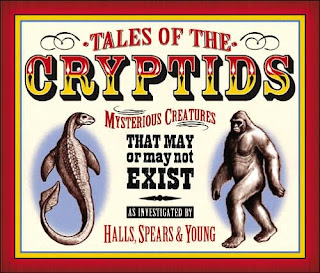 During my recent visit to the Mentor Public Library, I found Tales of the Cryptids: Mysterious Creatures That May or Many Not Exist (Darby Creek Publishing; 2006) shelved right where the title page suggests it be shelved in libraries that use the Dewey decimal system—001.94, with the cryptozoology books. Oddly, it was in the adult non-fiction section, under about two whole shelves of UFO books and next to a couple of Bigfoot books, all save one of which I'd already read (The one I hadn't already read and thus also checked out was Jeff Meldrum's Sasquatch: Legend Meets Science, which is a so science-y it can be awfully dry in certain chapters, but is interesting nonetheless).

This is odd simply because it is very much a kids book. The title page even recommends it be shelved as such. It's a 72-page hardcover book about the size and shape of your average picture book, and while there isn't a whole lot on each subject, authors Kelly Milner Halls, Rick Spears and Roxyanne Young provide a pretty thorough overview of Cryptozoology. It's a pretty great introduction to the topic—I would have loved it when I was in grade school—but grown-ups who have read much on the subject probably won't find too much in here the haven't heard before.

After a few pages explaining what cryptozoology is, the book breaks into chapters. Each begins with a scene-setting "Imagine...a night as dark as it is quiet..." page fictionalizing a theoretical encounter with something or other, and then presents a world map of sightings of a particular group of animals, and a bunch of short, one or two-page articles on various subjects under the umbrella of that group, with lots of pictures, sidebars and short interviews with real-life investigators and experts.

These chapters include ones on Bigfoot-type creatures, sea monsters, prehistoric cyptids, and cryptic mammals, and, the most interesting part for me, a "Cryptidictionary" section.

This is a 12-page section at the back of the book, with each page having four or five entries on various cryptids, giving each a paragraph of text, a "reality index" rating from "real" to "hoax," and a black and white drawing by Spears. Those drawings are what I'm most interested in for the purposes of this piece, but I should note that if you're interested in the subject matter and do run across this books, it may be well worth a flip-through for more than just art appreciation. I did learn a few things, including having heard of a few cryptids I'd never heard of before (Georgia river monster the Altamaha-ha, The Piasa Bird), and learned about a fantastic artist I had never heard of before, Sarina Brewer, who creates Feejee Mermaids, chimeras and other strange sculptures out of a combination of taxidermy and, I assume, magic (Do take some time to check out all the galleries on her site...there's an awful lot to see there).

The book is heavily illustrated with a ton of photographs and charts and maps and other visuals, but among all that visual clutter are some very nice drawings by Rick Spears (Who, I should note, is not the Rick Spears responsible for Teenagers From Mars and Black Metal, but instead a Georgia-based illustrator and builder of museum models and exhibits).

Spears provides black-and-white sketch-like illustrations of each of the cyrptids who have entries in the "Cryptidictionary," and these seem to be quite purposefully drawn to resemble quick sketches, as if Spears were a police sketch artist interviewing a witness about what the Jersey Devil he saw looked like, or perhaps he himself were hiding in the bushes trying to record what the Nandi Bear looked like before it disappeared into the shadows.

Spears' work is the only true visual throughline for the book, and it's a treat to see so many vastly different animals and creatures filtered through a single style. They all seem to belong together, which I suppose makes them feel a little more real (That is, they're all made of the same stuff, they all share a similar weight and relation to the artist). Likewise, I enjoyed seeing extremely familiar images recreated from photos or film into Spears' sketchy style. For example, that rotting corpse that looked like a plesiosaur that a Japanese fishing boat pulled up, or the Dover Demon, or Florida globster or Cardiff giant.

Also fun was observing the choices Spears made in differentiating groups of monsters that share a great deal in common. For example, there are about ten different sea-going reptilian sea monsters/serpents in the 'dictionary, and he gives them each various details so that no two look alike. If there are lake monsters, it would be reasonable to assume that The Loch Ness Monster, Ogopogo, Champ, Caddy and their lesser-known ilk are all different instances of the same time of unknown creature, but Spears draws them each as if they were their own species. I particularly liked his Nessie, which sports giraffe-like horns. Simply put, it doesn't look like any Loch Ness Monster I've ever seen, and that's pretty exciting.

To illustrate this, check out Spears' various hairy hominid types. Again, each of these creatures are, if real at all, likely close relatives, but Spears gives each its own look. In addition to Bigfoot, who is represented in the dictionary by a drawing of a footprint (and on the cover as the traditional Patterson-Gimlin style of striding ape-man), here are Spears' Bigfoot-types: 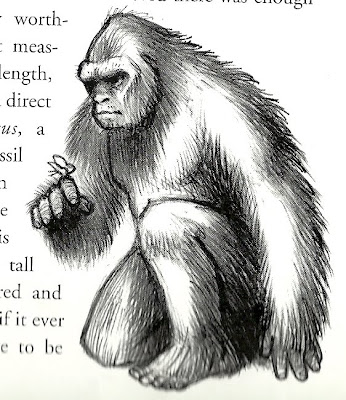 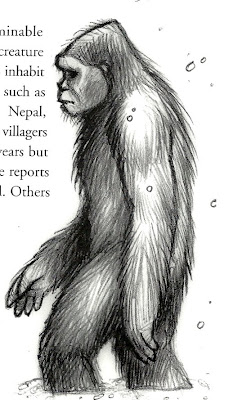 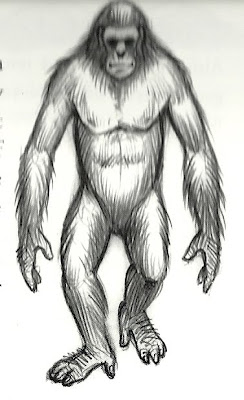 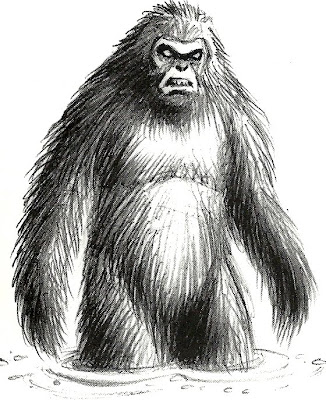 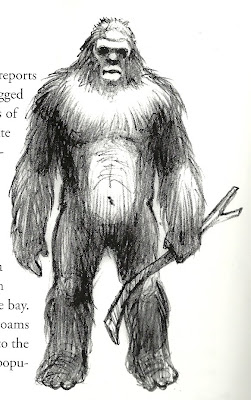 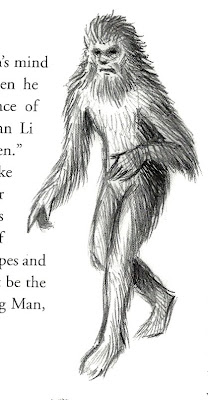 Those are, in order, a Sasquatch, a yeti, an orang-pendek, the skunk ape, the Australian Yowie and the Chinese Yerren.

Just a couple of subtle differences here and there make a really big difference in giving each their own look, huh?

Here's a just plain bad-ass looking monster, "The Owlman of England," which looks significantly cooler and scarier than the firsthand reports I've read of those sightings (or any of the owl men I've seen in Western pop culture): 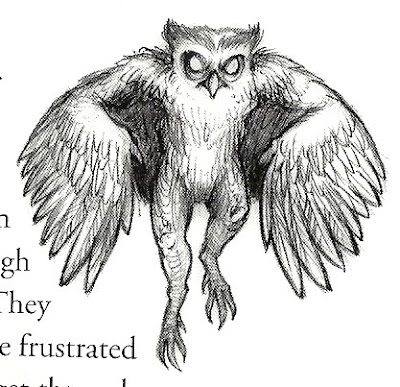 Perhaps my favorite drawing of Spears' in the book, however, is of the cryptid referred to in the dictionary as the "U-28 Sea Monster." I had coincidentally just heard of this dude a couple weeks ago while reading Loren Coleman and Patrick Huyghe's Field Guide to Lake Monsters, Sea Serpents and Other Mystery Denizens of the Deep.

When the German U-boat known as U-28 torpedoed the World War I British steamer Iberian, it sank more than its human enemies...survivors...saw a sixty-foot-long creature "writing and struggling wildly" as it took to the air more than one hundred feet up—the result of of the Germans' explosion.

Yes, this monster's only appearance was as a casualty of an underwater explosion. I like the weirdness of this story, which just seems so weird that it almost kind of has to be true—if anyone was going to make up a story about a sea monster sighting, why would you set your made-up sighting in the middle of an explosion? There's something appealingly slapstick about this story too; I guess it's the sea serpent equivalent of someone saying they saw Bigfoot, but they saw him just as he stepped on a landmine and incinerated himself.

Anyway, I love the way Spears depicts this monster: 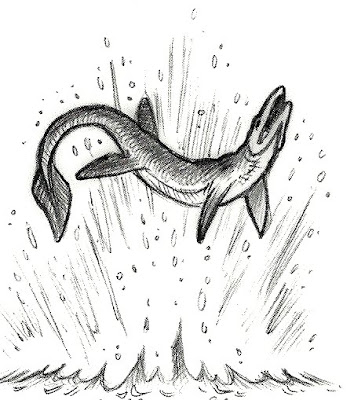 Finally, since I'm an Ohioan, and I know at least some of you are also Ohioans, I'd be remiss if I didn't include Spears' illustrations of our fellow Ohioans, The Loveland Frog or Frog Men.

For more info on the Loveland Frogs, here's a Cryptomundo post, and here's a site entitled The Loveland Frog Project. In short, there were several sightings of what appeared to be reptilian humanoids with frog-like heads in Loveland, Ohio (near Cincinnati), occuring in the spring of 1955 and again in the spring of 1972. The original sighting was made by a businessman who said he saw three bipedal reptile-like creatures on the side of the road. When he stopped to investigate and got too close, one of them held up a wand that began to spark.

So here's Spears' Loveland Frog, which garners a rating of "unknown" on the reality index: 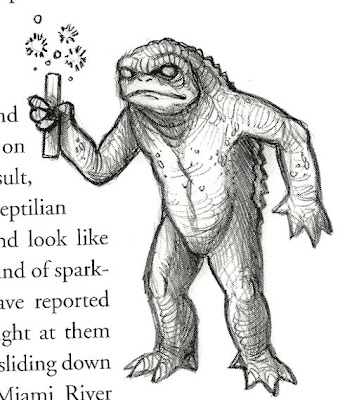 Caleb, I've never had an interest in mythical beasts, but your posts make me want to become an enthusiast. Good work.