A couple of nights ago I talked briefly about the Korean comic Comic, which is a teen romantic comedy set in the comics industry. That fact makes it a little more appealing to me as someone who's really into comics (although I tend to like this sort of thing anyway), because as cool as it is to see two characters who act like they hate one another's guts but are secretly crushing on one another get close enough that their hearts beat a bit faster for the first time, it's even cooler when the reason is that he leans over to appreciate the inking she's just done on a comic book page they were collaborating on.

So in one scene, our heroine Alice Song, who has just won an amateur manga contest sponsored by Cake magazine, accompanies her editor to the apartment of Saturn Kang, a hot, young artist. Saturn is falling behind deadline, and, when his editor comes to demand pages, he and his assistant hide. When they're found, Saturn stalls for time by telling his editor that he needs more help, so the editor calls his bluff and offers Alice as an assistant to help him finish the pages.

As an amateur aspiring to go pro, she takes the deadline much more seriously than the successful professional Saturn.

"No big deal," he says. "There are more important things in life." So I guess Comic is representative of the Western comics industry too, because that very attitude surely must be prevalent among successful comics pros in the U.S., or we wouldn't have so many late comics all the time.

"B-but it's two days to pring and if something goes wrong...readers will be disappointed!" Alice protests.

"What are you, some kind of bleeding heart?" Saturn responds, rubbing his chin and saying, "What a newbie..." before heading off to play video games.

He does give Alice something to do though. First he has her ink some pages, by they don't turn out so hot. Then he asks her clean his apartment up a bit, but that only results in things being broken off-panel.

Then he tells her he has an important job for her, puts a CD in the stereo, and orders her to dance. 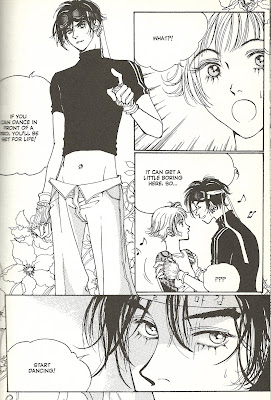 Did you see what he said in the first panel there? "If you can dance in front of a pro, you'll be set for life!"

So aspiring comics creators should be extremely confident, completely shameless or just really good dancers. That way, they can dance in front of comics pros. And they'll be set for life!

That, or Saturn was just screwing with Alice for laughs. But I ask the aspiring comics creators in the audience, is that a chance you're willing to take?

(Above scans taken from Yen Press' Comic Vol. 1 by Ha Si-Hiyun)
Posted by Caleb at 5:20 PM

Labels: manga, phoning it in

So Caleb, have you read Bakuman yet? It's a manga by the creators of Death Note about two high school kids trying to get published in Shonen Jump. Its really interesting for the behind the scenes info on how SJ's editorial process works.

Bakuman made me want to gag about the time the kid wanted to work himself into a hospital bed drawing Manga, following his uncle's example who died of overwork. That's a great example to send young artists.

For a country whose comics/manhwa industry was in a serious decline even before the worldwide recession started around 2008 (at least, that's what the panelists said on the big manhwa panel at the first New York Comic-Con about five years ago), Korea certainly has a lot of manhwa about people who are either in or attempting to break into the manhwa industry. Besides "Comic," there's "Hissing," whose teenage heroine is both an aspiring manhwa artist herself and the daughter of a not-so-successful manhwa-ga(sp?) whose series has just been cancelled, and "Forest of Grey City," whose twentysomething artist heroine earns at least part of her living drawing manhwa. There's also the TokyoPop series "Queens." This is about a high school pretty boy who gets rejected by his crush because she prefers the macho jock type. The distraught protagonist, inspired by a manhwa called "How to Be a Manly Man" he spots at the bookstore, decides that he'll be able to learn how to become more macho much faster if he goes straight to the horse's mouth and apprentices himself to the artist who's creating the manhwa--who, ironically enough, turns out to be a tomboyish, androgynous-looking woman.

Ya gotta love the harsh commentary this series supplies to the western comic book industry.