The least essential Blackest Night tie-in of them all 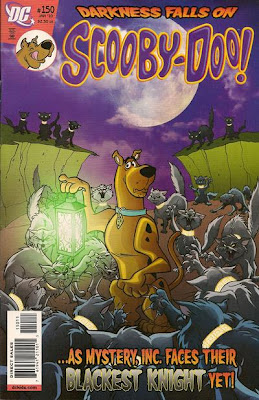 The cover of Scooby-Doo #150 features the tag line, “Darkness Falls On Scooby-Doo…As Mystery, Inc Face Their Blackest Knight Yet!” It was released in November of 2009, when the phrase “Blackest Night” would have invariably evoked the Geoff Johns-written, Green Lantern-starring event series Blackest Night, which at that point was as much as a DC Universe line-wide branding term as it was the title of a particular story.

Scooby-Doo is, of course, part of DC’s unofficial Johnny DC imprint, and as such never subject to what’s going on in the DC Universe proper, but if not a Blackest Night tie-in proper, DC was at least going for a joking allusion to the biggest DCU story at the time.

Note what Scooby-Doo is holding in his right paw on artist Vincent Deporter’s cover, after all.

The contents are split between two short stories. In the first, Scooby and the gang investigate a host of pampered black cats that inherited their eccentric late master’s fortune and now run riot all over town, seemingly plaguing it with bad luck. Hence all the cats on the cover. The green lantern on the cover references the events of the second story in the issue, “The Blackest Knight” by writer Sholly Fisch and artist Fabio Laguna (Laguna is one of the artists I mentioned in yesterday's post as being one of the better Scooby-Doo artists).

Lest one think the Geoff Johns’ Blackest Night references are a coincidence, check out the first two panels of the story, in which the gang arrives at a castle in England: 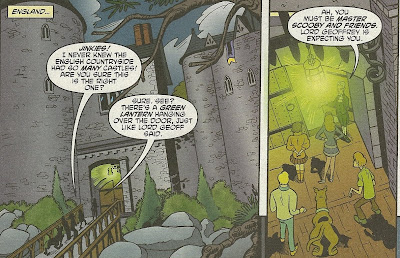 I’m not familiar enough with Geoff Johns' personal appearance to know whether or not that’s supposed to be his likeness or not (I do know that he's probably rich and successful enough now that he can probably afford to live in his own castle and dress as ridiculously fancy as he wants now). The amount of detail Laguna draws into it suggests that Lord Geoffrey is modeled on a real person though, as opposed to cut from the same cartoon cloth as the Mystery Inc. characters and the other supporting ones that appear throughout the short story.

If Lord Geoffrey is Geoff Johns, then who is Sir John? The fact that he’s colored slightly darker than Lord Geoffrey and has a goatee makes me think he’s simply supposed to be an evil Geoff Johns. Er, not to ruin the mystery or anything!

(And hey, while you’re scrutinizing that panel, check out Fred’s face. What’s that expression all about? Is there something…unnatural going on with his face? He looks sort of sick or possessed or injected with Joker venom).

As introductions are made and snacks devoured by Shaggy and Scooby, the ghost suddenly appears… 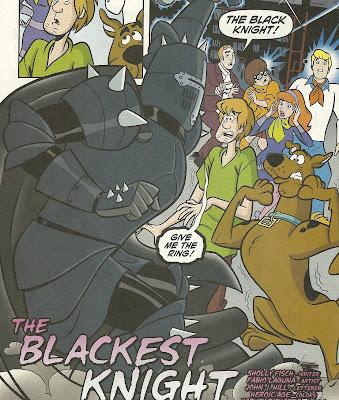 Like the others, Lord Geoffrey runs for his life when the ghost appears. 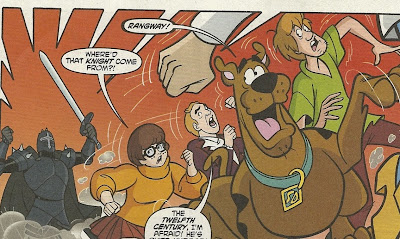 As Lord Geoff barricades them all in the study, we get some more subtle Green Lantern allusions: 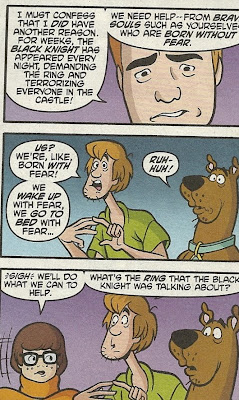 Are they overdoing it at this point? No. They overdo it on the next page, after Lord Geoff explains that the Black Knight is looking for a lost emerald ring, carved in the shape of the eagle from his family crest: 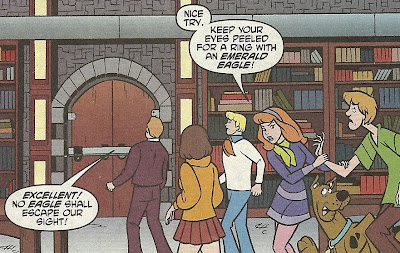 But wait, there’s more! When everyone splits up to search, Shaggy and Scooby volunteer to start with the kitchen and—wouldn’t you know it?—the ghost finds them. He chases them back to the crest in the study, and just as he’s about to stab our cowardly heroes, the crest falls from the wall, clobbering the knight and allowing Daphne to unmask him. 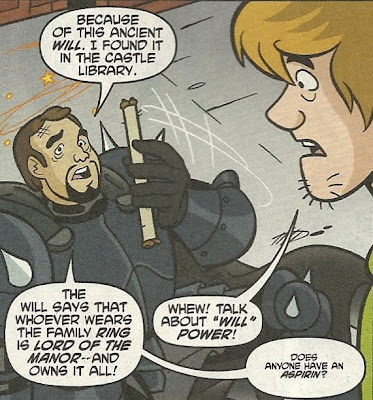 Will power! Green Lantern has that!

Finally, Velma puts two and two together and realizes the emerald ring must be hidden in the lantern, which is what caused it to glow green all this time, and sow Lord Geoffrey gets his green ring back: 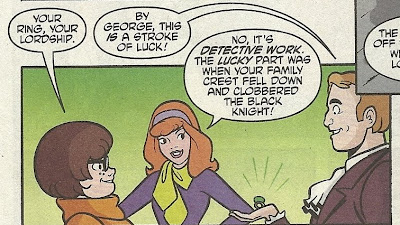 Maybe DC should have done a free plastic ring giveaway with this issue? It couldn’t have hurt.

Now let’s look at some more awesomely weird little kid art from the letters page of this issue. 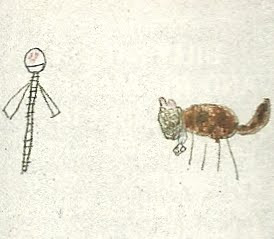 and here’s one from the perspective of someone totally tripping: 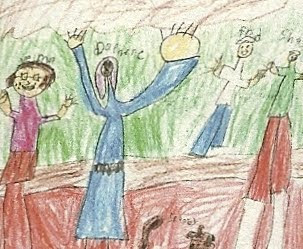 Aaaaaaaaaaaaaa! The strange special relations, Daphne’s tiny plum-sized head atop a long neck stalk and her horrifying, claw-tipped paws! This is much scarier than a bunch of black cats or a sword-wielding black knight ghost!
Posted by Caleb at 8:12 PM

If I had known about this book when it was released, I would've considered picking it up.

I think I enjoyed those scanned panels more than I enjoyed any non-Ostrander/Simone comic that was actually part of Blackest Night.

(I do know that he's probably rich and successful enough now that he can probably afford to live in his own castle and dress as ridiculously fancy as he wants now).

I think you're vastly overestimating what comic book writers (even "Big Name" ones) get paid...

The gets-clobbered-on-the-head bit is a nice callback to classic GL stories when Hal was always falling prey to ceiling tiles. Or at least that what the internet has lead me to believe...

Let me checked my awesometer here....yes, that is definitely awesome.

Obviously, I have to track this little gem down and add it to my Blackest Night collection.

Incidentally, I HAVE seen pictures of Geoff Johns, and it does rather look like him.

Lurker, if we're taking Caleb as being completely serious about the "wealthy enough to own a castle" bit, you have to remember that Geoff Johns has made some Hollywood money, too.