Okay one more post about Scooby-Doo comics and I’ll give it a rest for a while, I promise. I did want to focus on a story drawn by Karen Matchette before I called it quits though, as she was the artist with the most unique and individualized style I noticed while reading through that stack of Scooby-Doos recently, and whom I had singled out there.

So tonight we’re going to take a close look at the short story “Fashionistas,” which appeared in the back half of 2008’s Scooby-Doo #131, the one with the Earth Day cover (Is that the Tar Monster in silhouette? It looks like the Tar Monster). Jack Briglio wrote this story, and Matchette handled the art, pencils and inks, apparently.

Here’s the very first panel, which should give you some indication of how unusual Matchette’s art is, in the proportions alone:

Well, let’s move on. Fred is the only one who knows where they’re going and w hy, and he suddenly stops when he sees their destination, leading to this weird image: 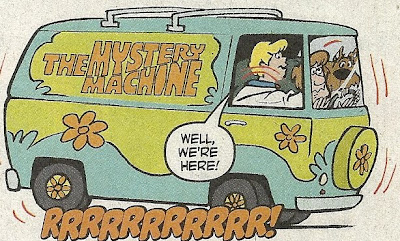 I kind of love how Matchette draws the characters here. Fred looks way off-model, but in a cool way. He still looks like the product of 1970s cartoons, but here it’s something of the School House Rock variety rather than a Scooby cartoon.

Anyway, they’ve arrived at the Hotel Pitz (Ha ha! Like Ritz, only with a “P,” as in “This place is the pits”), for—well, Fred will explain: 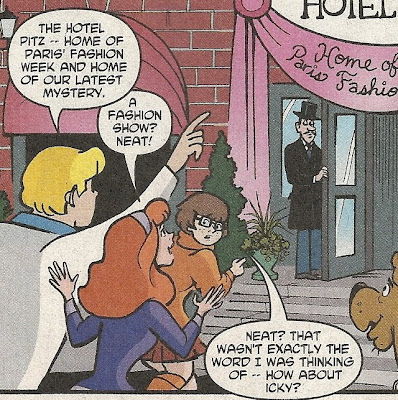 As soon as they get inside, this happens: 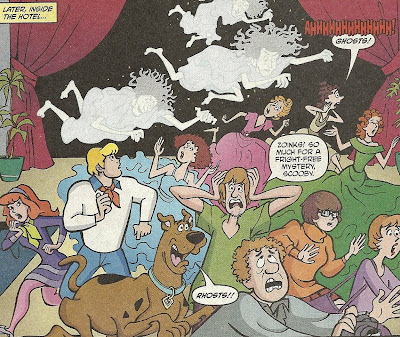 They start interview suspects immediately, and one of them takes quite an interest in Velma: 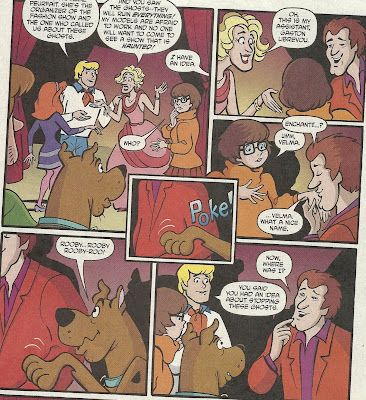 I know I noted that these comics tend to be more for kids than for an all-ages audience, and the quality of the jokes fairly sub-par, but I have to admit I liked the bit where Scooby holds out his paw to get kissed and Gaston Librevou totally ignores him.

Librevou has a suggestion for busting the ghosts—someone should go undercover as a model.

On the show, this would undoubtedly be Shaggy and Scooby, but the comic works on a slightly different logic, so Daphne volunteers, but Librevou only has eyes for Velma: 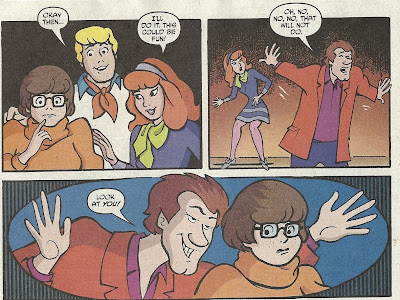 Check out this panel... 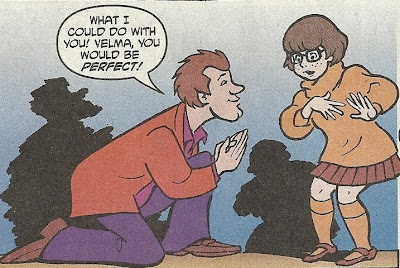 And so, one off-panel makeover later... 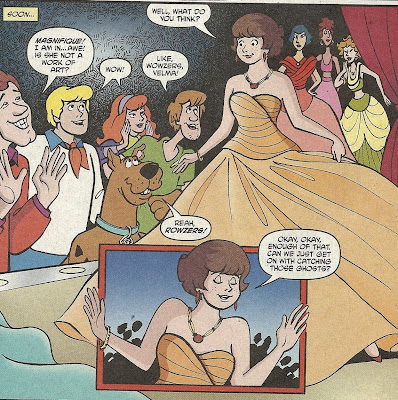 Cool, huh? Apparently we’re operating under the pop culture phenomenon that glasses automatically equals unattractive, while the absence of glasses automatically equals pretty. Looking aback and forth between the Two Velmas Matchette has drawn, there doesn’t seem to be much difference other htan the glasses. Her eyes are drawn differently, her hair less helmet-like and she’s got lipstick, which suggests the presence of lips absent from her normal look.

I can’t tell if the new Velma’s nose is suddenly more pert or not though, as the thick line of her glasses usually obscures parts of it. Nor can I tell if her waist has suddenly got slimmer, giving her a more hourglass-shaped figure.

Is that huge, baggy orange turtleneck just not terribly flattering to Velma’s figure? (This marks the third time in my life I’ve thought about Velma’s figure for longer than a few seconds at a time, following the initial shock of Linda Cardellini being cast in the live-action movie and seeing Philp Bond’s sketch a few weeks ago).

Now that we’ve talked foreground, check out the models in the background. Like Librevou, they belong to a completely different design aesthetic than the Scooby-Doo characters, only they seem even further removed than Librevou. That’s precisely what I find so interesting about Matchette’s drawing of these stories—it’s like the Hanna-Barbera characters just sort of wandered into a comic book, rather than being a comic book created specifically around them. It’s not necessarily a better approach, but it’s an interesting approach, especially considering she’s one of the few artists who went that route on the comics I’ve seen.

Here’s another image of Matchette’s non-Scooby characters, as they take to the catwalk (Meanwhile, Shaggy and Scooby are being chased by the ghosts, and have run up into the rafters)... 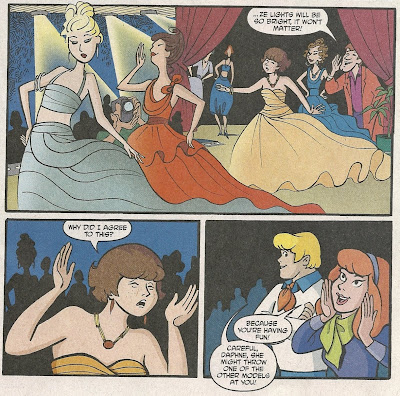 When the ghosts descend on the models, the blinded Velma accidentally headbutts one... 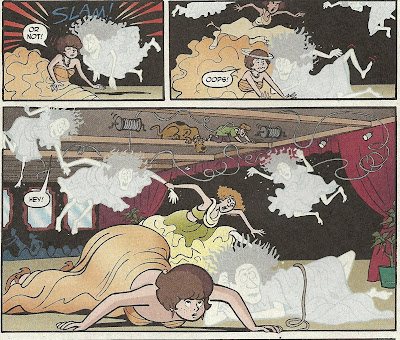 ... bringing them all down in a chain reaction, and the mystery is solved... 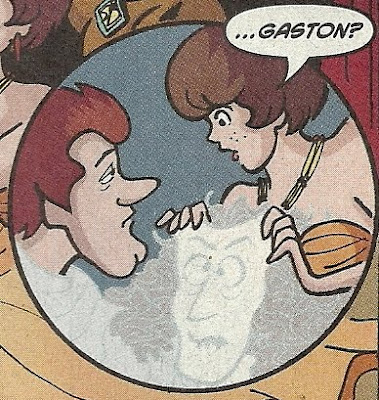 Of course! I knew there was something fishy about him when he chose to give Velma a makeover instead of Daphne!

And that's what Karen Matchette's Scooby-Doo comics look like.

Oh, and this issue also includes another “Velma’s Monsters of the World” feature, this one focusing on The Acheri, which artists Roberto Barrios Angelelli and Horacio Ottolini sure made scary… 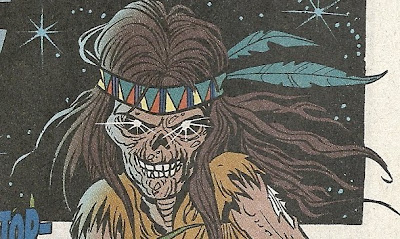 And another awesome child’s drawing of Scooby-Doo… 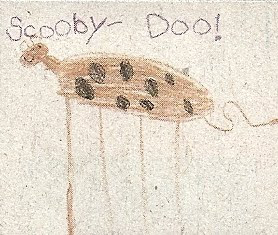 Re: the second Mystery Machine picture, the steering wheel seems to be on the right side (instead of the left as it is in the US).

So maybe they flew to England, bought a van, customized it and drove that to Paris via the Chunnel?

No, the monster wasn't the Tar Monster on the cover. It was to be a creature made of toxic waste and the story was to be the lead that I was to draw as well but it got pulled because of bad scheduling and so I kept the silhouette simple so that it just looks like a monster in the Scoobyverse. Don't read too much into it. I had to do the cover on Christmas Day for the day after deadline so putting in little homages wasn't on my mind, though in the end it came out to be a very strong cover design.

As for Velma's makeover, we were drawing the 1969 look and then we changed to the "What's New" look for about 4-5 years I think before WBCP told us to change back. So there is a difference to how the characters are drawn. The new series coming out has a tinge of Bruce Timm to the designs. I don't think the comics will go this way though since WBCP loves the '69 look.

Scooby-Doo is creatively bankrupt and it's all formula. There is nothing new and never will be. WB won't allow it for the licensing end...or the TV series or new movies for that matter. The "Get a Clue" series was made only to keep the branding of the character out there. It only lasted two seasons and none of that look was used for anything. The formats for the comics are no better since the first page is always the teaser, gang enters on the second page, etc. Page 7 is the trap and 8 is the reveal. It gets to be the same thing over and over and over.

Also WB wants it to be on model as well, but they do allow for some artists like Karen to do a little something different. Some just follow the style guide poses, which can be bad since you then see the same running poses over and over. Laguna traces some of the style guide stuff but tries to tweak it well enough to make it look fresh, but a reader who has seen it all will still pick out the same familiar poses of Freddy running or Daphne pointing. It's the nature of the game.

The best I can do to keep it fun is to include characters from the cartoons that were background characters and put them in. Like the bank manager who was the Creeper. You put him in the background but in a different job and then build a little back story for yourself to make it fun such as this is where he is now that he's out of jail. I've done that quite a bit to try to get fans to read the comics. I had a flashback to draw for one panel and used the design of Fred as a kid from the "Pup" design as a nod to fans. No one ever noticed or cared, but it was fun for me to add it. Unfortunately most people who watch the Scooby cartoons don't know comics exist... or care for that matter.