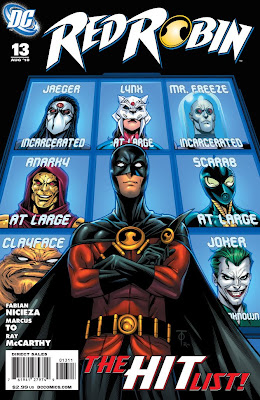 Holy smokes, is that really what Anarky looks like these days? (Note the villain in the maroon hood, just over Robin's right shoulder).

Because that's a pretty awful design.

I suppose it must be what Anarky—or Anarky II, if what I've heard about recent past issues of Robin is correct—as the look on the above Red Robin cover seems consistent with the way Anarky looked on his last few cover appearances in the since-canceled Robin monthly: 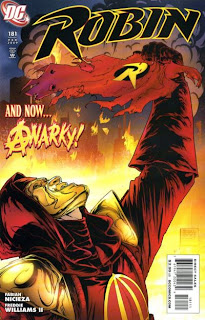 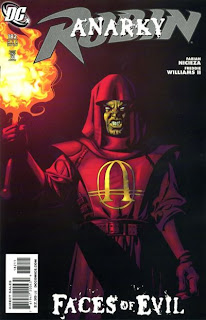 If so, it's a real shame—I really liked the original Anarky design, conceived by artist Norm Breyfogle and writer Alan Grant, as a riff on the main character of V For Vendetta's costume.

Here's Anarky's first appearance on the cover of Detective Comics, and a few other Anarky images by Breyfogle: 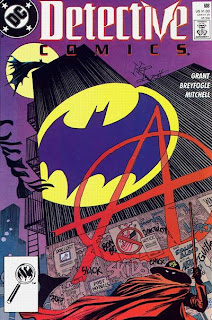 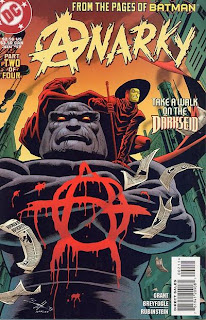 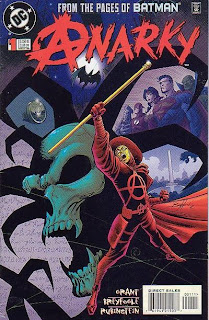 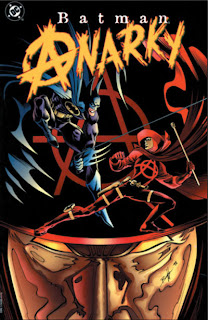 Breyfogle tinkered with it quite a bit as time went on, especially when he and Grant tried spinning the character off as a solo character, first in a miniseries and then into a short-lived ongoing.

The character was originally a little kid too short to even fill out the costume, so he had a weird apparatus that sat on his shoulders under the hat and mask, giving Anarky a strange look with very square shoulders and an elongated neck. Eventually he hit puberty, grew a bit, and wore the mask over his face, so he got less Muppet-y looking, and the costume became more formfitting. By the time the ongoing launched, he had ditched the red robe and red cape combo in favor of just a cape over a more sensible pants and shirt combo. Both versions looked better than the one Anarky II's sporting these days.

Here's the original Anarky, with the head-apparatus, as drawn by Sam Kieth: 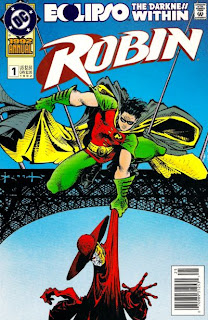 God I love the way Kieth drew Anarky's right hand on that cover. I could look at that drawing of a hand all day, man.

And here's the last cover appearance of the original Anarky that I know of, as drawn by James Jean: 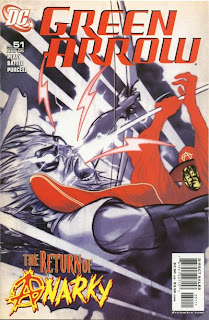 Green Arrow sure used to have some pretty covers, didn't it?
Posted by Caleb at 8:46 PM

The justification behind the Anarky II from Nicieza here. Given the character conception, I'm just as happy for them *not* to be using any of the cool original character designs. The new character isn't interesting enough to deserve to evoke V for Vendetta. If he's supposed to be "Robin's Joker," let him look more like Joker and less like V.

The Wikipedia entry includes the following from a friend of mine, anarchist philosopher Roderick Long, on the change from cool Anarky to boring Anarky-- a sarcastic summary of Nicieza's post:


"Thesis: Anarky is too interesting a character not to write about.

Antithesis: Anarky is too interesting a character for me to write successfully about.

Dialectical synthesis: Therefore I will make Anarky less interesting so I can write about him."

But I will say: lots of credit to Nicieza for recognizing that what he wanted to do was so different from the original character conception that he couldn't do it with Lonnie-- and then for not killing Lonnie to get him out of the way.

I immediately thought of Spider-Man's villain Carrion when I looked at him.

Thanks for that link, Jacob. That is what I heard was going on with the Anarkys at the time.

On the one hand, I respect Nicieza's approach (I also think Anarky's one of those characters that was so sharply defined by his creator/s that little good can come of others using them).

On the other hand, making The General into Anarky II seems kinda silly to me, as it takes two good characters—and it's not like Robin has many other great villains—and makes them into one. That just seems like poor character economy to me, like killing off Vic Sage to make Renee Montoya the question, so you "spend" two characters to make one character you already had.

The best choice would have, of course, been to create a new character at least as viable as Anarky and The General to create a Joker for The Robin.