The fact that it took me this long to get around to reviewing these books gives some indication of my overall assessment of their quality.

Cold Space #1 (Boom Studios) I’m not entirely sure how to truthfully describe my reaction to this comic book without seemingly trying to make a pun about its title, but, well, it basically left me cold.

This is the Samuel L. Jackson project teased and then announced with some fanfare earlier in the year, and it’s easy to see why the publisher would have been so excited about it—it is Sam Jackson, after all.

Jackson is clearly the model for the character (particularly the way he’s depicted by Jeffrey Spokes on “Cover B” of the first issue, above) and he shares a “written and created by” credit with Eric Calderon, one of the writers and producers behind the Afro Samurai cartoon.

There was less for a reader to get excited about then there was for the publisher and the creators, though.

Two-thousand years from now, somewhere in space, the space-cops are after a bald, goatee-sporting guy (who looks like he could probably be played by Sam Jackson if a Hollywood studio decided to produce a movie based on this comic) by the name of Mulberry. He eludes them, but in the process crash-lands on a planet that looks a little like an outer space version of the Old West, but not to the extent of, say, Bravestarr or Outlaw Star or Trigun or that Nathan Fillion show the redcoats...er, brown shirts...no, browncoats like).

There scavengers try to get at his tech, and he wakes up in time to find himself caught in the middle of a local turf war between two rival gangs and, um, that’s it.

The plotting and script work perfectly well, and artist Jeremy Rock does a perfectly fine job of moving the story from panel to panel while filling them each with a wide variety of challenging (to create) visuals, ranging from space ships and space cop armor and weapons to the colorful costuming choices of the planet Mulberry lands on.

So there’s nothing wrong with the first issue of Cold Space, but then, there’s nothing remarkably right about it either. Jackson and Calderon haven’t yet offered a fresh new take or twist on the roguish-dude-in-space premise, the execution isn’t so extraordinary that it transcends a fairly by-the-numbers plot, and while Rock’s art is great, it’s not the sort to knock eyeballs out of sockets and demand a reader’s attention.

In a crowded comics market, this is one more comic book. 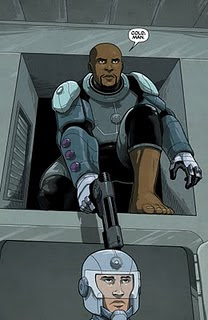 Frenemy of The State #1 (Oni Press) This book shares a lot of surface similarities with Cold Space, and a cynic—not that I know any—could argue that both are attempts by actors to create movie roles for themselves by creating comic books starring characters they could play.

Rashida Jones, who has appeared in a bunch of TV shows and some movies I’ve never seen, is the co-writer and character model of this one (I should not, however, that if it wasn’t for Rashida Jones’ name on the cover, I wouldn’t have even thought of here when I looked at the lead, given the abstraction of the character design, and the paleness of her skin tone in the interior images). Jones is teamed with the writing team of Christina Weir and Nunzio DeFilippis, and Jeff Wamester provides the artwork.

The title’s a clever one, and while the premise of espionage among the young, hot paparazzi-stalked celeberatti is pretty far outside of my interests, they get points for originality. It’s high concept, even if it’s more of a sitcom/movie pitch sort of high concept as opposed to, say, cat who runs a noodle shop or World’s Greatest Half-Vampire Private Detective Skateboard Champion sort of high concept.

Our heroine is Ariana Von Holberg, an heiress who naturally studied fencing and martial arts in college and, due to her trust issues and the men she’s dated, has become something of a master hacker. When she hacks into the wrong security system, the CIA dangled a get out of trouble free card in front of her if she’ll do some work for them. Her first mission? Steal a secret sex tape from a blonder, more vapid person in her social circle—not exactly a friend of hers, more of a frenemy. (Get it? Like in the title!)

Again, this comic is perfectly well-constructed and works perfectly well (for the most part; there is an awkward transition into a flashback between pages seven and eight), but I didn’t find anything in it to hook me into checking out the second issue of it, but then, that’s me. I can certainly see the book finding an audience. (Maybe not so much in serially-published $3.99, 34-page comics, but certainly as trades shelved in the YA sections of libraries and bookstores).

Wamester’s art was probably my favorite aspect of the book. I like the balance he strikes between stylization and representation, and his worked reminded me somewhat of Stuart Immonen’s, albeit with wider-eyed characters with sharper facial features.

After being introduced to his work via this book, I spent plenty of time on Wamester’s site and Deviantart page, and I really liked what I saw there. If you’ve got some time, give it a perusal sometime. If you’re into superheroes at least as much as I am, then his sketch card gallery on Deviantart is a fine place to start. 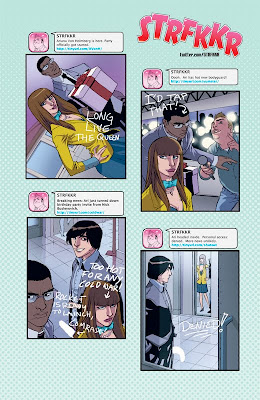 The Green Hornet Strikes! (Dynamite Entertainment) I was trying to keep Dynamite’s many, many Green Hornet comics straight in my head for a while, reading the first issue of each at least, in part because I’m just so fascinated with the publisher’s plan to produce them at a rate that makes Marvel’s exploitation of Deadpool seem conservative.

But I’m afraid I am now quite thoroughly lost. I have officially lost my place, and can’t tell which Hornet is the son of which other Hornet, and which book is set in the same fictional universe as the others.

I don’t suppose that matters all that much when looking at the various Green Hornet books one at a time, but Jesus, there are a lot of Green Hornet books. I think by this point they should come with little charts on the title page of each, so readers can keep the organization of the franchise clear in their minds, and some Reid and Kato family trees wouldn’t hurt neither.

Anyway, this Green Hornet series features a rather striking costume redesign for the main character, as he sports on old-fashioned gas mask instead of one of the more stylized numbers some of the other Hornets have worn. Coupled with his gas trick, it does make him look a bit like DC’s Golden Age Sandman, but there’s so much crosspollination between superheroes that surface similarities between any two is only rarely even worth mentioning. The big, bug-eyed goggles and long, snout-like protrusion of the gas mask does give the mask a more insect-like appearances, and this Hornet has long, unkempt hair uncovered by a green fedora.

So there’s at least one difference.

Writer Brett Matthews story is so simple that it almost defies criticism. The first issue is a straightforward visit to a corporate-style bad guy named Mr. Kaast in his skyscraper office by two different Green Hornets.

One is named John Reid, works for a newspaper, and graying at the temples and carries a cane. The other is the mysterious one in the gas mask.

The former visits Kaast invited, has a sit down meeting with him, and sells him the secret identity of the Green Hornet (i.e. says “Hey man, I’m totally the Green Hornet”). The latter breaks into the building on a dark and stormy night, fights with security and attacks Kaast, but ultimately gets his ass kicked to the point that whether he lives or not is the cliffhanger the first issue ends on.

And it’s maybe set in the future, judging by the keyboard on Kaast’s computer?

And, um, that’s it. That’s the whole first issue.

Alternating between the two visits is effectively suspenseful, and gets a bunch of action and some apparently plot setting-up done in an efficient manner in which neither aspect overwhelms the other, but man, there is pretty much nothing at all here to make reading Green Hornet Strikes! #2 seem like a better plan than reading any other Green Hornet comic, which is what’s so weird about Dynamite’s strategy—not only is their masked crimefighter competing for the shrinking fans of single issue comic books starring masked crimefighter audience against all of the Marvel and DC books, but their Green Hornet books area competing against each other.

If I wanted to read a Green Hornet comic regularly, I’d honestly have no way to pick between this and Green Hornet: Year One or Green Hornet…they’re all decent enough.

One advantage Strikes has over the Kevin Smith-written series at least is Ariel Padilla’s artwork—it’s quite strong, and this might have been the most visually striking of the Dynamite Green Hornets I’ve read. But, again, it’s all been muddled into one big, green mess in my memory at this point, so I suppose you should keep that in mind when I say this looks like it may be the best drawn of the Dynamite books.

Certainly the splash page revealing the new Hornet on page four is heck of an image. 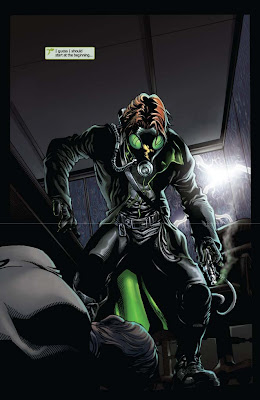 RELATED: I mentioned above that I've somehow managed to never see a single television episode of a series she starred in or a movie she was in (I'm afraid I'm just not very good at watching television), but I was once in the same room as this famous Hollywood actress once! For, like, a half hour. In the fall of 2004. Check it out: 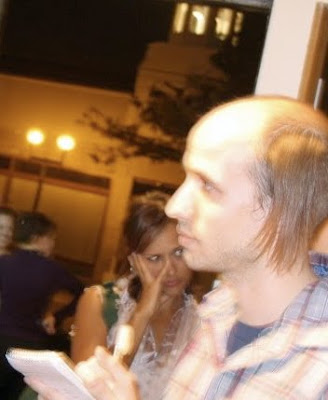 Jones, actress Claire Danes and at least one of John Kerry's stepsons were visiting Columbus, Ohio on behalf of Kerry's failed campaign to unseat President Bush.

I was still a writer/editor for a Columbus-based altweekly at that time, and was covering the event.

am i seeing this correctly? do you have pigtails in that picture?!

Jones is in the American version of The Office, and rather good she is, too.

It may interest nobody at all to learn that I think she would have made a perfect Lois Lane, alas and alack.