More of David Petersen on Mouse Guard: Legends of the Guard 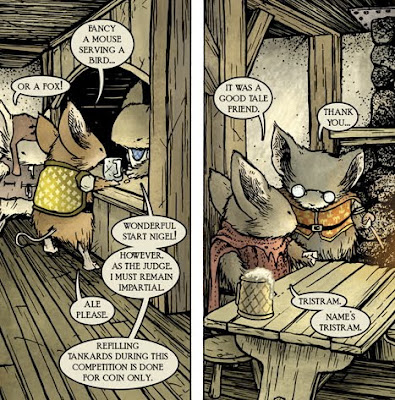 Once again, here's a link to the feature on Mouse Guard: Legends of The Guard series I did for Newsarama yesterday, and here are some of the "deleted scenes," featuring David Petersen. If you're interested, do read the piece on Newsarama first, as the more relevant questions and explanation of the project can be found there.

These are bits that I found super-interesting, but didn't have room to include in the piece. Better to post them here on my personal blog than to let them go to waste though, right? Questions are in italics, Petersen's answers are in regular font below.


How were the particular artists who contributed chosen? I’m curious what criteria you might have looked for in a contributor, if it was simply a matter of them being artists you liked or if you were looking for artists you knew would have very different takes on the characters.

I picked everyone who is in this collection. I was focused on individuals who are both writer and artist in one (though we do have a few collaborative efforts as well). Good solid fun stories that were well told was the goal, so people who I think do that well were put on a list. The top of the list were people who filled the criteria above, but also were friends of Mouse Guard (had talked to me at conventions about how much they enjoy the book, done pinups in the past, or have publicly helped push my book on to their fans.) I think that I also chose artists who have a very unique style. Something that when you see their work it's immediately recognizable as theirs.


You opened up Mouse Guard to other artists almost immediately, with pin-ups in the back of the very first issues. I take it you’ve always liked the idea of other artists drawing your mice guard?

I like the idea of seeing other takes on my characters and world. The pin-up section started as a way to fill an extra page when I was just starting out and learning how to pace an issue. The idea of one less page to fill was nice. But it resulted in having some awesome folks do some amazing pieces.


What was the collaboration like? Did the artists come to you with their stories finished, or were you heavily involved throughout the process? Obviously Mouse Guard takes place in a world with a very detailed and specific culture and history, but I noticed one of the rules of the tale telling contest was “no complete truths.”

For the guests, I try and offer them a great deal of flexibility. They can use the two hardcovers and the RPG as a guide if they like, but these being the “tall tales” of Mouse Guard, we wanted them to go beyond that. Roughly the three main rules are: No adult language, no gratuitous violence, and no adult themes. I also had them avoid certain characters of mine or major events and wars, but by doing so I hoped I was opening up what they could play with. They could make characters, make their own wars and events, rewrite history! I want these stories to feel uniquely like the creator(s) and not like a David Petersen story so-and-so just happened to draw. I just approve the work as long as it makes sense to me as a good story (it reads well, the thumbnails tell the story, etc.)


Did you get any or many weird questions from any of the contributors about details that might be second nature to you at this point, like, I don't know, how many toes mice have or if ferrets make a particular noise when fighting hedgehogs or anything?

Sure, I was asked about towns, what animals wear clothing (or don't wear clothing), culture differences between mice of different areas, etc. The number of digits on hands and feet has come up too. For some reason, I do three fingers and three toes...but real mice have more than that. Some artists wanted to do something more in-line with nature, others wanted to keep continuity with what I do. I tired to answer their questions as best as I could, but I tried to make sure they were still doing what they wanted to do...what felt right to them.


Is it at all difficult to see other artists, even such incredible ones as these, working on your creations? I was wondering if it was a bit like a parent letting one of their friends babysit for the first time at all?

Not at all. It's a thrill! I really enjoy these people's work and I'm grateful they are willing to do the project. This being an out-of-real-continuity book, it's easier to be so cavalier, I'm sure. If I were handing over the reigns for someone to tell one of my major stories with Lieam, Saxon, and Kenzie, I'm sure I would have the feeling of saying goodbye to my kids.
Posted by Caleb at 6:10 PM