During my last visit to Marvel.com, I noticed this post about an episode of the The Super Hero Squad Show, featuring Doctor Strange and the dread Dormammu.

Apparently the latter hits the heroes with a magical whammy at some point, transforming Iron Man from this 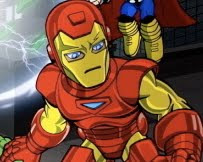 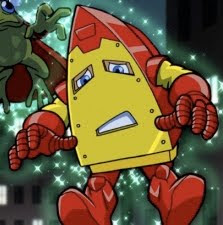 And when I saw that, I naturally thought of this 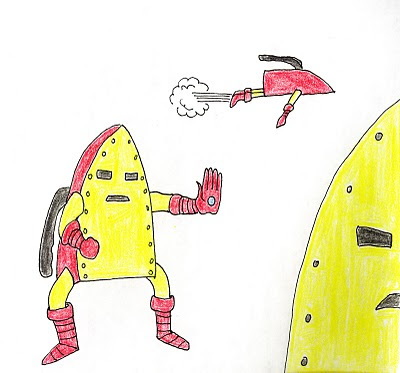 which I posted on EDILW in April of 2008, while talking about Iron Man costume design in response to Project: Rooftop’s “Iron Man: Invincible Upgrade” contest.

Now don't get me wrong here. I don’t for a second thing anyone involved with the cartoon saw my blog post a couple of years ago and then decided to steal the gag. Not only because Blogger tells me I have 100 “followers,” which I think means “People Who Read My Blog,” and it seems somewhat mathematically improbable that very many of the people who work on that particular cartoon fall within the 100 people who follow Every Day Is Like Wednesday.

No, it’s also a simple matter of the fact that Iron Man-as-an-iron gag isn’t a terribly inspired gag, and I’m sure I couldn’t possibly have been the first person to think of it (nor will the The Super Hero Squad Show be the last to make it). Hell, given how long the character's been around, chances are that joke was being made before I was even born.

What is important here is that the makers of the The Super Hero Squad Show and I apparently share similar senses of humor, in which case I should probably try watching that show when it comes out on DVD.

Have any of you guys watched it before? How is it, and does it approach the insane perfection of Batman: The Brave and The Bold?
Posted by Caleb at 10:20 PM

It's aimed at a much younger audience than Brave&Bold, so no it can't compete. Still pretty cool. Watch it with a 4 yr old for maximum pleasure (I have twin boys). It's more of a "throw the whole Marvel Universe at the playground wall and see what sticks" approach rather than the more focused ninja-like B:B&B awesomeness.
I just find it astounding that superheroes have become so mainstream that my 4 yr olds know what the SHIELD helicarrier is without reading a single comic.

Super Hero Squad is pretty damn cool. It's so far out of continuity it's not funny, but it's pretty awesome. It's about the only cartoon I watch because i just flat out enjoy it. Definitely check it out, whenever it gets released on DVD.

Another 49 followers on google reader!

I thought it got old after a while. Definitely aimed at toddlers who watch with their geek dads. Not sure it's worth buying on DVD, but certainly worth renting.

It's hilarious. The character designs are horrible, keeping it from being in Brave and the Bold's league, but the writing is so much fun, with great gags like the one you just pointed out and extremely light-hearted takes on the characters. Silver Surfer, for instance, talks like a California surfer and Thor was in a metal band during high school.

If you like Cow&Chicken, it's worth a watch, if only because anything Charlie Adler does seems to become Cow&Chicken after a while, and Dr Doom as Big Red Guy is funny. It's a check-out, but not a consume-avidly, for me.

I've only seen a few episodes, but I enjoyed them well enough. It's not a must-watch like B:B&B.

It did have one of the coolest Dr. Doom moments though. MODOK somehow took everyone's powers away. The Super Hero Squad all stayed sidelined and moped about powerless, Dr. Doom instead started doing push ups and jogging and working out to get his strength back, in order to defeat MODOK (cause Doom is second to no man (head?)!). Only once Doom was about to defeat MODOK did the Squad decide to back Doom's play and team up with him. Very inspiring for a villain, don't roll over and give up, you work twice as hard and you win!

Super Hero Squad has its moments, but, yeah, it's definitely aimed at little kids. I don't think it and Brave & Bold can really be fairly compared. I must admit, though, that my 2-year-old daughter much prefers Brave & Bold, even though it's primary intended audience is older. Go figure.

Thanks for the feedback gang. I do hate those designs, which is why I've never sought the show out, but I did just watch the opening sequence on YouTube, and the idea of a cartoon with the likes of MODOK and The Falcon in it seems sort of exciting to me.

I'll borrow a DVD of it at some point I'm sure.

you could also watch the show here, if you wanted: http://www.superherosquadshow.com/