Ted Naifeh on Mouse Guard: Legends of the Guard 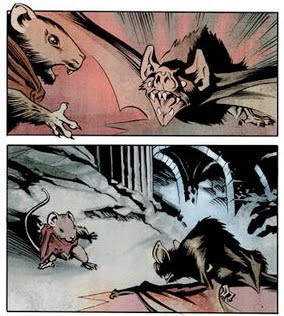 As previously discussed, Ted Naifeh (Courtney Crumrin, Polly and The Pirates, Good Neighbors) is one of the three artists who contributed a short story to Mouse Guard: Legends of the Guard #1. I asked Naifeh some questions about his story and the creation thereof for this piece on Newsarama, but didn't have room to include every interesting thing Naifeh had to say about Mouse Guard, drawing and drawing Mouse Guard. So I'm putting it here. As with the previous piece in this little mini-series of posts, my questions are in italics and the artist's answers are in regular font.


How did you come to work on this project, and why was it one you wanted to devote your time too? I imagine you must have been a fan of Mouse Guard previously?

Mouse Guard was one of those books I couldn’t ignore. There aren’t a lot of them. But it has a presence. Something about the format, the craft, the cute little mice treated with such grave seriousness. It’s beautifully complete. I ran into David last year at Dragon Con and we got to talking about his world, and he brought up the Legends book. I was immediately interested. I even came up with the basic idea right there in the midst of conversation. He loved it. In January, I called Archaia regarding another project, and the Mouse Guard editor asked me if I had time for this. It turned out I had a window while I was waiting for approval on the thumbs for Good Neighbors Vol 3. The timing was perfect.


How did working with David Petersen work? Did you have carte blanche to do whatever you liked? Was there a lot of discussion regarding your story?

There was less than I’d expected. I understood David’s world pretty well, and we’d already decided on the idea. But I hadn’t known the format, that it was tales told in a tavern. So I had to re-conceive the conclusion of the story. It had been a bit more tragic. But if everyone dies, no one can tell the tale.


I smiled when I noticed you did a story with bats, given the spooky settings and characters you’ve worked with before. What attracted you to the bats of Mouse Guard as subject matter?

I really liked them in the main series. They struck me as the goblins of the Mouse Guard world, except cooler because the can fly. But more importantly, they’re not wicked creatures. Any more than the mice are. There’s just this attitude of mutual distrust. I like the idea that mutual distrust can turn a foreigner into a monster. I’m a big fan of the Hobbit, but I feel like there was something a little to convenient about the sudden appearance of the goblin army. It seems to me that what everyone wants in a war is a goblin enemy, but what you really get is dwarves, elves and men seeing each other as goblins. Is that too geeky? Sorry.


What was it like drawing a story set in a world as thoroughly defined by another artist’s style and aesthetic? Did you find yourself trying to draw David Petersen-like at all, or modulating your style to “fit in,” even if only unconsciously?

Oddly, I had no trouble slipping in to his world, both in writing and in art. Obviously, I don’t stylize mice the way he does. I prefer to look at real mice and stylize in my own specific way. My bats were based on real vampire bats, but they ended up looking like gargoyles on gothic cathedrals. But it’s clearly a story from his world, because his world is so unique it could hardly be anything else. As for the story, I feel very much in step with the way he writes, so it was easy to write something in way that fits into it. I have a much harder time writing established superhero comics, because I don’t get the style as well. But David’s work just clicks for me.


Was it challenging working with animal characters as opposed to humans (and fairies and monsters)? It seems like a more difficult task to convey emotion in the face of a mouse instead of a human, and the bats especially have pretty spectacular visages.

Not at all. Facial expressions are hard wired into our brains. You can get a strong range of emotion out of punctuation. Look at Wallace and Gromit. Gromit doesn’t even have a mouth, but he has this huge gamut of emotions. The only thing he can’t do is smile. Which is fine, because he rarely has cause to smile anyway. It’s the same with the mice in Mouse Guard. They don’t smile much, but it’s a pretty somber book anyway, so you don’t miss it. I find that artists like myself start losing emotional range when we get caught up trying to be too realistic, or too fancy in our stylization. Artists forget than the first purpose of a comic character is to convey emotion. Everything else, like realism, or other kinds of virtuosity, is an optional extra. If you sacrifice expression for the sake of other concerns you’re putting the cart before the horse. We’re all guilty of it from time to time, but it’s not good comics.
Posted by Caleb at 6:45 PM