Not comics: Ben Patrick's illustrations for The Monster Spotter's Guide to North America 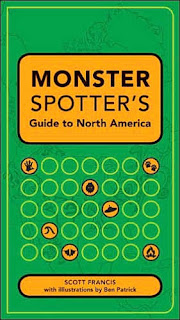 The Monster Spotter's Guide to North America (How; 2007) is one of those books that has such a strong book design that the design itself was enough to get me to pick it up off the shelf and give it a looksee (Grace Rign gets credit for the design). The conceit of the book is a rather simply one, and rather simply executed, but it's a fun one. As the back cover says, it's "Like a bird-watching guide...only for monsters."

The book is a tall, skinny rectangle (About 7.8-inches high and 4.6-inches wide), and author Scott Francis breaks it up into geographically defined ranges ("Monsters of the Northeast," "Monsters of the South," "Monsters of Canada," etc). Within each chapter, monsters are broken into seven categories ("Sasquatch and Hairy Monsters," "Flying Monsters," "Folklore Monsters, etc.), each with its own little icon/symbol (You can see these all on the cover...I espcially like the Sasquatch one). Francis offers other info as well, including an introduction explaining the hobby of monster-spotting (much safer than monster hunting), what tools you'll need, and some appendixes (one dealing with famous monster corpses, another giving a time line of North American monster history).

Every monster in here I've heard of in another book, generally in much greater detail (As you may have noticed, I've been on a bit of a monster kick in my prose reading recently—Mothman Prophecies sent my reading in that direction, and I'm currently reading Loren Coleman's Mothman and Other Curious Encounters and re-reading Keel's Complete Guide to Mysterious Beings...many of the monsters in this guide are covered in both of those books).

That's not necessarily a failing of Francis' book, however. It's not that kind of book—the publisher's library subject suggestions are "monsters" and "folklore," and suggests the Dewey decimal number for folklore, but the bookstore shelving suggestion on the back cover is "pop culture/humor."

I think it works as a nice survey of American monster lore though, an easy-to-read, single-sitting introduction to a fairly massive monster menagerie that an interested reader can use as a springboard into more detailed reading. The "resources" appendix, for example, lists ten books—four by Coleman, two by Keel—and a dozen websites. Maybe springboard's not the best metaphor...The Monster Spotter's Guide is like a nicely-designed, well-furnished lobby at the entrance of the huge, labyrinthine complex that is the body of writing on the subject of monsters cryptozoological, mythological, paranormal and folkloric.

It's also full of illustrations, which is a large part of why I picked it up (You can read about The Flatwoods Monster of West Virginia, but it's so bizarre it's hard to actually "see" with one's mind), and why I'm bothering to write about it on a comics blog at all.

As a lifelong Ohioan (give or take a few years of college in Pennsylvania) with a lifelong interest in monsters (particularly those native to the Buckeye state!), I was excited to see that the book is the work of Ohioans. Francis was born in North Carolina, but currently resides in Cincinnati (Not to from Loveland, where the Frog Men live, or Dayton, where they keep the alien bodies), and Patrick is a native Ohioan.

So as we previously did with Rick Spears' illustrations for Tales of the Cryptids, let's take a closer look at Patrick's work.

He doesn't draw every single monster listed in the book—some of the lake serpents don't get full entries, let alone illustrations, perhaps due to how little some of the details change from example to example—but the bulk of them get drawings. Most of these are fairly simple black and white with little in the way of background, and the use of grays and lines sort of suggests pencil drawings, although many have very thick black lines.

Some aim for realism, like the Bessie image I'll post in a moment, or the second drawing of the Piasa Bird, which resembles a prehistoric monster more than the sphinx-like first drawing. Most lie somewhere between quick sketch and cartoon—albeit a more representational than expressive cartoon—reminding me of the sort of art I used to see in role playing game guide books (Yes, I used to be one of those people too).

I don't know that I'd run out and buy the book for the art—I borrowed it from a library, which is I suppose how I'd suggest interested readers first experience it—but as is probably obvious by now, I'm fairly fascinated with the way different artists present the same characters or creatures. However I may feel about the art or the subject, I like looking at drawings of things lots of other people have drawn before.

First, let's check out some of Patrick's drawings of some Ohio monsters.

Here's his Bessie, the Lake Erie sea monster that, in my limited experiences, seems to have more hoax and tourism-boosting sightings than real ones: 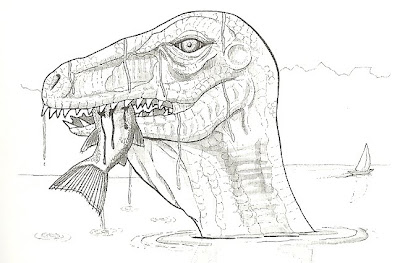 Patrick gives it a Tyrannosaurus-like appearance, with which I can't quibble. Despite growing up—and currently living—on the coast of Lake Erie, I've never seen the beast, which is more locally known as South Bay Bessie and said to dwell further east, closer to Cleveland. She did inspire the name of the Cleveland-based minor league hockey team, the Lake Erie Monsters (they have a pretty sweet logo, by the way). 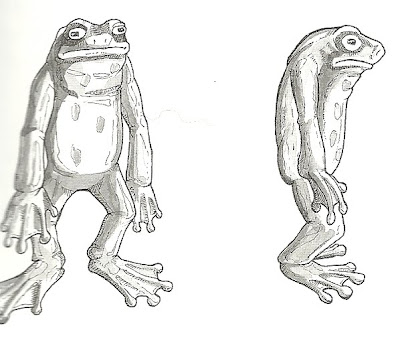 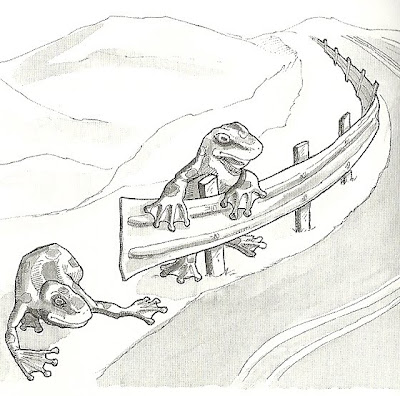 Other Ohio monsters covered are our old friend Orange Eyes and the Charles Mill Lake Monster of Mansfield, but neither of them get illustrations (presumably because of their Bigfoot-ishness, as there are several other big, hairy monsters illustrated already).

Next, let's look at my favorite of Patrick's drawings.

Here are his Devil Monkeys: 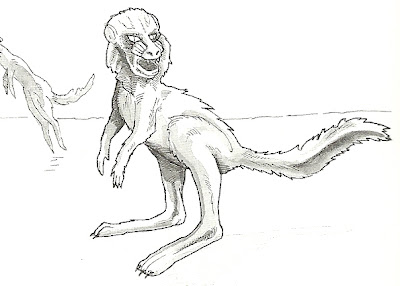 If you've read many books on cryptozoology in the U.S., you've no doubt heard of the Devil Monkeys, which seem to reside in the overlap in a Venn diagram with "hairy humanoids" in one circle and "phantom kangaroos" in the other.

Accounts of them vary pretty wildly, but, in general, they seem sort of baboon-like, sort of kangaroo-like (particularly in their locomotion) and to be real dicks, attack cars and generally be pretty aggressive for animals that refuse to be caught or shot.

I like the ridiculousness of Patrick's version of them, where they literally have the heads of mandrills atop kangaroo bodies.

And here's The Mulberry Black Thing: 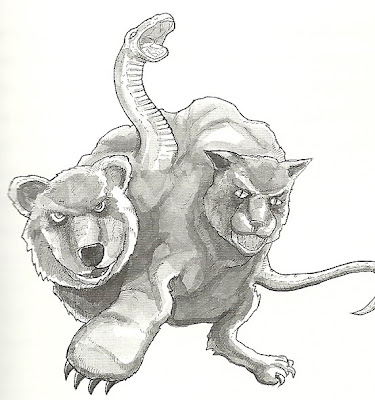 It's a folkloric monster from Kentucky. It's a shape-changer, so Patrick depicts it in a state of potential, as any of three different forms simultaneously. It's a good way to approach the subject, and it also looks pretty weird and scary in that form.


Finally, I wanted to note Patrick's depiction of the Dover Demon. Another classic case of UFO lore and maybe-it-exists monster lore, the Dover Demon was only seen by a handful of witnesses on several nights in 1977 in Massachusetts. It's striking physical appearance is probably best known from these images: 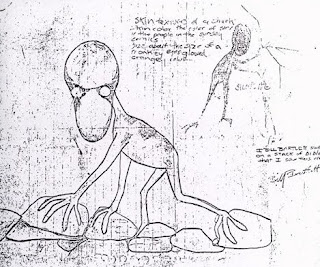 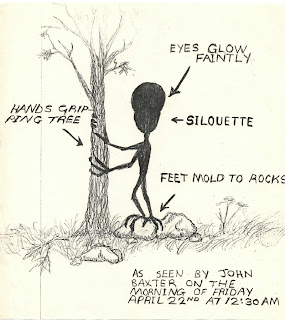 Despite the demonic moniker, early theories as to just what the hell the creature actually was have gravitated toward some sort of UFO or alien explanation. Maybe it came from a flying saucer, or is some sort of ultraterrestial from a different dimension. Others have wondered if it might not be some sort of creature native to this world, as it bears some resemblance to the fairy-like, mythological Mannegishi of Cree legend. Among the more mundane explanations are that it was perhaps a misidentified newborn moose calf or, of course, a hoax.

Patrick's depiction of the Dover Demon implies another explanation for the creature's true identity: 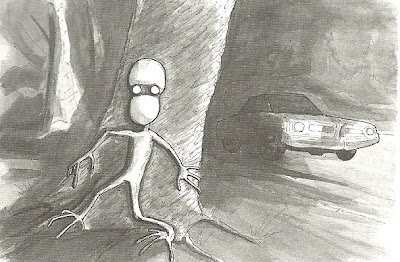 Obviously it was a ninja.
Posted by Caleb at 9:39 AM

I was a big fan of the original Monster Manual and I see the similarities in the illustrations. Thanks for the review of this. You've got me thinking of a new project so, if nothing else, you've planted a seed.

How is the book's Jersey Devil? I've found that to be a monster many illustrators have difficulty with.

How is the book's Jersey Devil?

It's okay. It's drawn like a small, maybe pony-sized dragon-like creature with the hind legs of a goat and the suggestion of hair of fur here and there instead of scales. It's crouched atop the roof of what looks like a shed or shack and is peering over the edge, as if trying to look in a window or something.

Haha - you are right - I sort of wanted to shoot for a North American Monster Manual type of feel. :) It is awesome to me that anyone liked any of the pics. They were a lot of fun to draw, even on a pretty tight deadline.

For the Jersey Devil I think I looked at the oldest account I could find...? Definitely a challenge!