Another place I didn't expect to find a comic on Halloween weekend?

The back of my cereal box. Check it out: 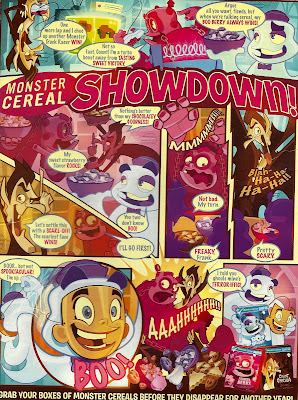 That comic strip was on the back of all three of the "monster cereals"—Count Chocula, Frankenberry and Boo Berry—this year. No artist is attributed, of course, but I really rather like the artwork. Yeah, the lay-out is too crowded, and the lettering overdoes it with the fonts a bit, but the character designs are all pretty neat (more stylized and expressive versions of the very of-their-day 1970s conception) and all the lines that go into building the characters' poses and postures are used to great effect.

I particularly like the panels featuring the count and Frank's scary faces, and that Count Chocula is hanging from the ceiling in the first panel.

At first I was a little disappointed by the premise of the strip. Is this what monsters, even cereal spokesmonsters, do in their spare time? Sit around playing video games, occasionally stopping to argue about whose cereal is better and/or who can make a scarier face?

But then I spent about 15 minutes on YouTube looking for old TV commercials featuring the characters—originally, I wanted to check to see if the Boo Berry ghost sounded as much like Peter Lorre as I remembered, or if that was just some weird memory construction of my own—and found that that is exactly what the spokesmonsters do. Just hang out engaging in various leisure activities, occasionally breaking to fight about their cereals. In most of the ones I watched, Frankenberry and Count Chocula seem to be living together, and sharing a meal or dusting their castle or hanging out on the beach when Boo Berry floats in to annoy or scare them. (One exception being the time they are exploring an Aztec pyramid and stumble upon Yummy Mummy, whose fruit-flavored cereal didn't prove as enduring as their own cereals).

The gag of the monsters being scared of perfectly ordinary children seems particularly long-lived as well, as many of the commercials end with them either being frightened by a kid, or some thing else fairly innocuous, like a cat or the wind disturbing something.

It seems pretty light hearted for a mercenary advertisement. I can get behind nearly any bit of nostalgia. A flaw of mine.

I don't remember Yummy Mummy at all! Wasn't there a werewolf-themed cereal called Fruit Brute?
Nice comic, but I like the old cut-out masks better. Boo!