Some things I noticed about Action Comics Weekly #605 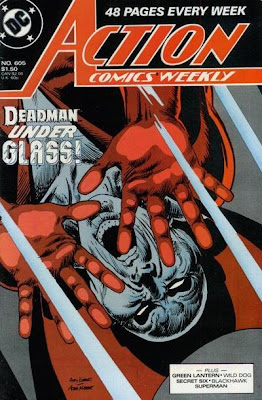 Hey gang, it's time once again for a new installment of Caleb Posts Just Posts Some Images From Copies of Action Comics Weekly He Got In a Fifty-Cent Bin Because He's Too Tired To Write A Review Tonight! Hooray! Tonight we're looking at Action Comics Weekly #605, which features a cover by Andy Kubert and Adam Kubert, two young, up-and-coming artists who showed a lot of promise back in 1988, but never amounted to anything, and quickly disappeared from the face of comics.

Ha ha, just kidding! They both went on to become extremely popular, always-in-demand artists, both of whom have some sort of issues with deadlines. At this point, their combined work looks an awful lot like that of their father Joe's work. If you took their signatures off the cover and asked me who drew this image—and, um, hadn't already seen their signatures and thus knew the correct answer—I would have guessed Joe Kubert.

Nice to see that dumb-ass headline/blurb/gag/whatever on the cover too...DC's been doing that on the covers of their comics for 30 years now, huh?

First, let's check in with the Green Lantern feature, sill written by "James Oswley" and stilled penciled by the great Gil Kane. When we last left Carol "Starfire" Ferris, she used the evil magic gem possessing her to make it appear as if John "Green Lantern" Stewart had murdered her. In this issue, she climbs out of her grave, wearing a sassy, off-the-shoulder burial gown... 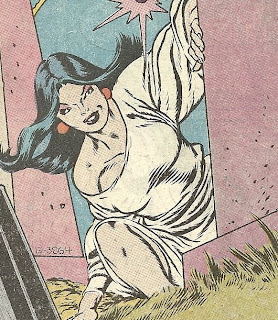 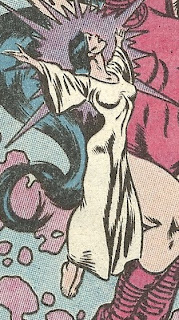 In fact, I think her burial gown is even more clingy and formfitting than her purple bathing suit is.

Once out of her grave, she uses her gem to make her costume and silly hat appear and, something I hadn't noticed until seeing her in and out of costume on the same page before, apparently when she's Star Sapphire her hair grows about three feet longer and gets so thick that it must weight about fifty pounds.

She continues talking to herself for a few more minutes in teh graveyard, until my favorite panel happens: 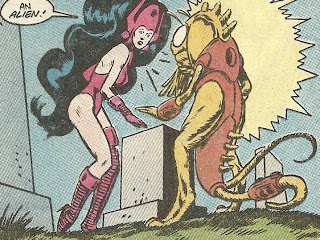 I love how surprised she seems to see an alien, given that she is herself an alien (sorta, the gem is, and its possessing her) and she flies around in space dealing with other aliens all the time. I also like how her response is to just state, "An alien!" when she sees the bizarre being appear before her. What makes her so sure it's an alien, so fast? Why not, "A mutant shrimp-man!" Or a more realistic "What the hell is this thing?" or "Aaa!" or "Holy @#$%!"

That is one awesome-looking alien, by the way. It's humanoid wihtout looking the least bit human really. I like how its hips are so close to its arms, and the split tail. And it's weird little suit. I can't quite imagine how it puts on that suit—getting it over the tails, and lining up the little tail-spikes just so seems especially difficult—all of which contributes to its overall alien-ness.

Unfortunately, we don't learn much more about him in this issue. That above panel is the end of this scene, and when we return to Star Sapphire and and the little space shrimp man later in the issue, he speaks only in alien gibberish, so we don't learn his deal. He usurps control of the gem and kick's Carol's ass though.

Meanwhile, Hal Jordan thought-ballooning about his current predicament. He's trapped at Golgotha, but not the Golgotha of the Bible; rather, he's at Space Golgotha, which is place with a weird, twisty landscape, fuchsia skies, and constant yellow lightning storms. Carol trapped him here, in this place where time doesn't really pass, and he's ringless and in chains.

Suddenly, his ring appears! But he's having trouble getting his shit together long enough to use it, since he keeps getting hit by lightning (This story, by the way, seems to be a good one for anyone working a Hal Jordan Is Massively Brain-Damaged thesis). But then he does get his shit together and escapes.

The sequence on Golgotha gives Kane the opportunity to draw a sexy Hal Jordan to compliment his sexy Carol Ferris in the opening pages. Hal's mask is off, his costume in tatters, his hair is tousled and he's unshaven. And in chains, if you like that kind of thing:

In the Deadman story, or hero has been captured in some sort of glass capsule found by the CIA at an ancient astronauts HQ in South America. They stuck him in it, and transported him to their own headquarters. Can you believe the uniforms that CIA officers on guard duty used to have to wear in the eighties? 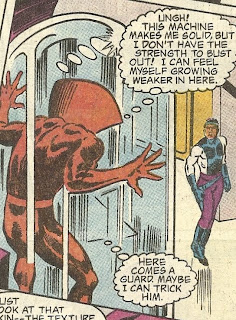 This chapter of the Deadman story takes a pretty weird twist, when Deadman, inhabiting the body of that poor guard in that terrible uniform that would have embarrassed an X-Man, makes the mistake of communicating with the disembodied voice in an old piece of pottery kept under a similar bit of glass, and then getting a little too close to it. 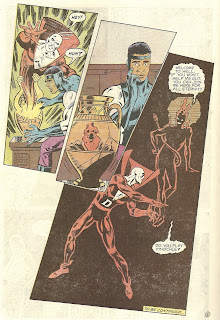 Oh hey look, it's Satan! As designed and drawn by pencil artist Dan Jurgens and inker Tony DeZuniga. What's up with his weirdly erect tail? And who knew the CIA had Satan captured during the late-eighties?

I thought this was a pretty cool cliffhanger, as the story went from fairly typical superhero and sci-fi stuff into supernatural and religious territory in the space of a scene.

In the Wild Dog strip, the be-hockey masked hero plays possum, admits that he likes the smell or burning flesh (remember, he set a dude on fire in the previous installment) and then uzis two dudes at point-blank range. 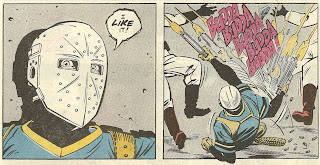 I forgot how much I liked the sound effect BUDDA BUDDA BUDDA BUDDA BUDDA until I saw it here. Do writers just not use it very much anymore? Or do I just read fewer comics in which character fire sub-machine guns at each other than I used to?

Finally, in Mike Grell, Rick Burchett and Pablo Marcos' Blackhawk strip, the title character meets Sheah Chun Ryan, The Red Dragon. She's a red-haired Asian lady dressed like a supervillain with a cape, a pistol, a whip and a tiger, all of which adds up to sort of dangerous and exotic, but I can't help being disappointed in her tiger. Burchett gives her a little tiger. Not a cub, but not yet a big, scary tiger either. It's like a teenage tiger, I guess. 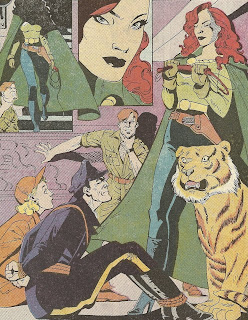 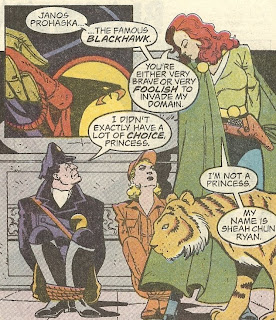 I'm sure it's a lovely pet and all, but it looks like more of an around-the-house tiger, not the sort of tiger you'd break out to terrify your captive guests with.

Finally, if the pages of Hal Jordan naked to the waist straining against his bonds didn't offer enough scantily clad dude for you, the Blackhawk strip also features hairy-chested Andre, wearing only shadows: 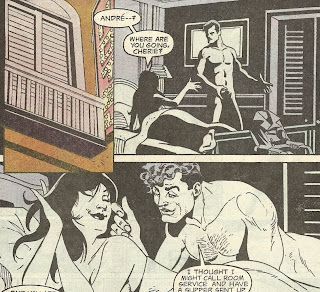 Although with a mustache and expressive eyebrows like that, Andre doesn't need to be naked to be sexy.
Posted by Caleb at 5:40 PM

"Hal's mask is of, his costume in tatters, his hair is touseled and he's unshaven. And in chains if you like that kind of thing".

It...it's as though you posted this just for ME! Yeah, there was Deadman and a simply adorable teenaged tiger but still...half-nekkid Hal!