I wrote a review of DC Comics: The 75th Anniversary Poster Book, a collection of cover images from throughout the publisher's history, for Blog@Newsarama today (You can read it here). While I'm pretty sure I had previously seen at least 90% of the images themselves before, each contains a few paragraphs of commentary as well, making for a decent history of the publisher and, through it, American serial comics in general. In fact, it was, to a certain extent, downright educational.

I know I learned a few things from it (Or at least re-learned things I had probably heard before but had forgotten knowing).

In fact, I learned nine things...


1.) Wonder Woman's skirt was changed to a pair of shorts because the former was deemed too provocative. Writing about the cover of 1942's Sensation Comics #1, and the origins of Wonder Woman, Schnakenberg writes, "Note the slightly racy skirt, which was quickly replaced by star-spangled shorts, deemed less provocative by DC editors." 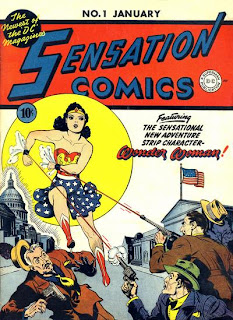 It's often quite difficult to get in to the mind of someone from a generation or two ago, but the billowing skirt on that cover seems to offer more coverage of Wondy's shape and skin than the shorts, which would ultimately shrink and shrink until they got to be about high-cut panty length.

And then Ed Benes shrunk them even further, until there was hardly room for a star to spangle them.

2.) Wonder Woman has a white-fur lined Christmas version of her costume. Well, I imagine it's actually fake fur, given her ability to talk to animals, but either way, I don't think I've ever seen, or at least can't recall ever seeing, this neat image by the great H.G. Peter: 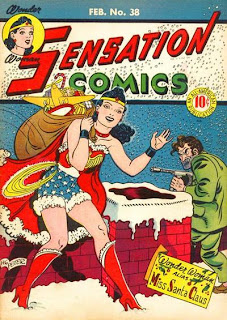 3.) That familiar Felix Faust's finger cover of Justice League of America had a precursor. You know the one, right? 1962's #10? It was apparently based on the cover of 1952's Sensation Comics #109 by Jim Mooney: 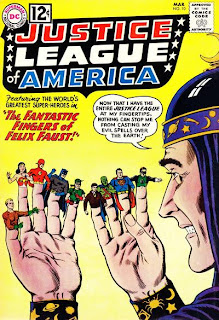 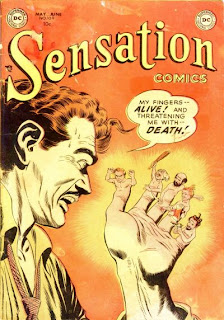 You know Guy On The Cover of Sensation Comics, you might want to use your right hand to do something about the gun in your pinky finger's hand, or at least move your left hand away from your face before he can get a shot off...


4.) Bizarro's square-Earth version of "Bizarro World" also had a precursor. Check out the cover of 1954's Mystery in Space #22, by Murphy Anderson: 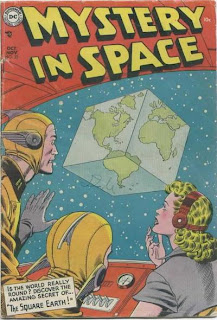 5.) That's Lousie Simonson on the cover of House of Secrets #92. You've probably already seen the Berni Wrightson cover a few dozen times. It's the first appearance of Swamp Thing, who looms out of the night behind a woman brushing her hair. 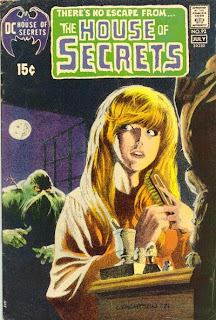 According to Schnakenberg, "Comic book writer Louise Jones—later to become Louse Simonson—served as the model for Swamp's as-yet-unsuspecting wife, Linda)."

(Say, was Walt Simonson ever drawn Swamp Thing? I think I'd really like to see his style applied to a man-of-muck type some time, if not.)

On the opposite of the page containing the House cover, there's a smaller image of the cover of House of Secrets #125 by Luis Dominguez. While perhaps not as famous or influential as the Swampy cover above, it is fantastic. That's some pretty scary shit right there.


6.) Mister Miracle's cast was based on some surprising real people. This sounds like one of those things I had previously heard, but forgotten about. At least, the Steranko bit sounds familiar. Anyway, Schnakenberg writes:

[Creator Jack Kirby]based the character of Mister Miracle and his alter ego, Scott Free, on his colleague Jim Steranko, a former escape artist. The villain in this issue [Mister Miracle #2], an elderly harridan named Granny Goodness, was said to have been loosely modeled on comedienne Phyllis Diller. Chesty actress Lainie Kazan, who had recently posed nude for the October 1970 issue of Playboy, was rumored to have provided the visual inspiration for Free's buxom wife, Big Barda. The byplay between Barda and Free was based on Kirby's relationship with his real-life wife, Rosalind.

7.) DC's multiverse was apparently created in a remarkably roundabout fashion. We all knew that "The Flash of Two Worlds" story from 1961's Flash #123 was the start point for what would become DC's multiverse of parallel dimensions, many of which represented different publishing lines or particular companies' or era's of stable of characters. 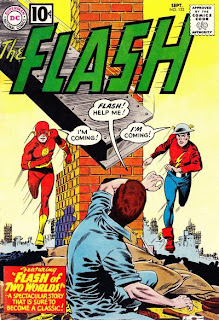 According to Carmine Infantio, Julius Schwartz came up with the "Flash of Two Worlds' concept after Infantino presented him with the cover, which shows both Flashes speeding in from either side of the frame to save a man about to be crushed by a falling girder. "Here, figure this one out," Infantino said. "I will," replied Shwartz, who set about resolving the paradox using the conceit of parallel Earths, a familiar staple of pulp science fiction tales.

8.) Mordecai Richler didn't like The Dark Knight Returns. As I was reading the inclusion of sharp criticism of Frank Miller's genre-redefining work, I first thought that it was awfully brave of the editors to include such a harsh assessment of one of DC's books in a project that is ultimately a celebration of how wonderfully awesome DC Comics is. But then I realized that it's probably not that daring, given how history has sided with DC and Miller, and Richler's opinion now seems so contrary that it looks kind of funny. Richler's New York Times review is quoted: The stories are convoluted, difficult to follow and crammed with far too much text. The drawings offer a grotesquely muscle-bound Batman and Superman, not the lovable champions of old...If this book is meant for kids, I doubt that they will be pleased. If it is aimed at adults, they are not the sort I want to drink with.

I wonder if Richler would want to drink with many of the creators and readers involved with, say, the post-Identity Crisis DCU, or the post-Bendis and Millar Marvel line? 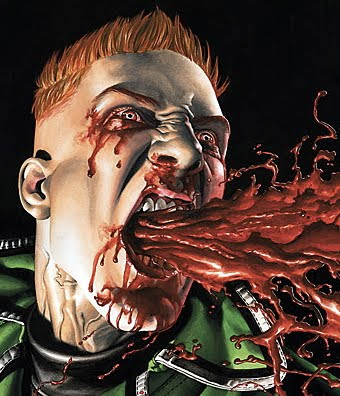 BLAAAAAARRRRRGH!!
Posted by Caleb at 9:33 AM

I bet you had heard the Mister Miracle stuff before...especially if you follow Mark Evanier's blog (and really, you should!). I'm sure it's come up there before; if not, then certainly one of his introductions in the various Fourth World omnibuses...

When I think of Lainie Kazan, it's always as the lead character's mom in that movie "My Big Fat Greek Wedding."

She does not look like Big Barda in that.