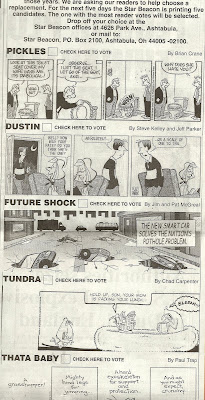 I think I may have seen some mention of papers doing something similar to determine how to replace Cathy Guisewite's Cathy on one of the comics blogs I read, but it was kind of strange to see this in my hometown paper.

I don't regularly read this paper, so I'm not sure if they ran these same five strips for five days in a row (which would make sense, since it's hard to get a good idea of what a strip is like by picking a single one out at random), or if they ran five different strips each day for five days, for a total of 25 choices (I checked today, and the contest was over, but I didn't see any of these five on their comics page though, so I don't know).

I can understand why a paper would choose this method, as it a) fills up a lot of space (which seems to be a big concern for this particular paper, which is apparently always seeking different strategies for killing space, given the number of high school athletics photos are run at one-fourth the size of a full page), b) passes the buck on the decision-making, and thus diffuses some of the negative letters to the editor complaining about the awful new strip ("Don't blame us, the majority of our readers wanted that dumb strip you hate!") and c) invites reader participation/engagement with the paper in a relatively low-stakes way.

Still, it seems a little strange to me, as it's hard to imagine any paper giving that sort of control to their readers over other aspects of the paper. Editors at small city, wire service-dependent papers like this one are always making many little decisions about content, but would they leave it to their readers to vote on which syndicated op-ed columnists they run? Which advice columns? Which paper's crossword puzzles? Which wire service they subscribe to?

Probably not, which seems to reveal the paper's lack of esteem for the importance of the funnies page. But hell, maybe I'm just sensitive about this sort of thing, it being comics-related and all.

I found it interesting that the two forms of voting mentioned in the little paragraph explanation were to either drop off your choice at the newspaper office in person, or to mail it to the office. No email? No, of course not—no one who reads the paper version of a daily newspaper is online. (Okay, I'm just being a jerk; it's probably to circumvent attempts to stuff a virtual ballot box).

Also of some interest were that none of the five strips above really seemed all that Cathy-esque, in terms of subject matter or content. Pickles is a family sitcom-like strip, I suppose, and this particular installment of Dustin does mention dating I suppose, but none of these five seem particularly woman-oriented the way that say, Tina's Groove or The Pajama Diaries are.

Of these five, I think Pickles is probably the closest one to actually being funny, but mostly just because of the overreaction of that dude on the right in panel three...seeing that toilet seat fall down all by itself like that raised his hair as if he just saw someone spontaneously combust. Dustin seems like the best-drawn though, and would probably get my vote (reading through the archives of Dustin, it's actually a pretty strong strip). If I cared enough to vote for Cathy's replacement in my hometown newspaper that I never read.
Posted by Caleb at 5:19 PM

Whoa. I gave up the daily newspaper some time ago...and for awhile after that the only funnies info I got was from the Comics Curmudgeon (which I really must get around to checking out again). But I've gone cold turkey long enough to say that, except for Pickles, I've never heard of a single one of those strips. Has the landscape changed THAT MUCH?

Once Foxtrot gave up the daily ghost, I really lost interest, I guess.

I know you mentioned it, but I was definitely struck that the paper didn't spend the five minutes it would take to set up an online poll. Perhaps its prone to abuse and people voting from outside the paper's circulation area, but... man... its just kind of telling.

Yeah, if nothing else an online poll costs nothing to score while mail in and drop off ballots do. On the other hand it shows some dedication to actually mail in the page so that might be what they're looking for.

And Caleb, you're not voting for Future Shock? That was the only one that got a chuckle from me.

Huh. I thought Tundra was the funny one.

My hometown paper, the Grand Fork (ND) Herald, did something similar when Calvin & Hobbes ended, as I recall. I have no idea what ended up replacing it. Sally Forth or something.

You'd be surprised how into the comic strip section people are in the paper. From my experience working in a newsroom, the people who make the paper don't really care, but the readers do. A lot. I worked as an assistant and one of my duties was checking/distributing the newsroom e-mails from the generic newsroom e-mail address. You would be amazed at the e-mails that poured in when we mistakenly published the same crossword puzzle as we did earlier that same year.

I thought they were all pretty awful, but that is how I have felt about newspaper strips for a long time.