Big-Two super-comics that sold worse than Thor: The Mighty Avenger 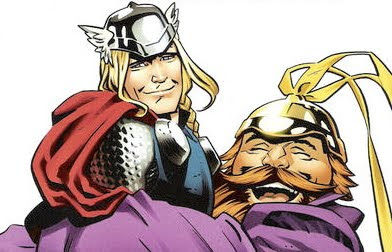 You've no doubt already heard that Roger Langridge and Chris Samnee's recently all-ages Thor: The Mighty Avenger series is about to be canceled.

If you haven't heard, then you must not read much about super-comics on the Internet, as it was one of the top topics of conversations over the course of the last week or so. (Exhibit A, B, C, D, E, F and G, for starters).

Shortly after all the chatter climaxed and started to die down a bit, The Beat posted their regular, monthly features analyzing the available data regarding comic book sales from DC and Marvel in a given month.

These numbers, remember, don't reflect reality in a one-to-one relationship, but are estimates, and are associated with the number of copies of comics that retailers ordered through Diamond distributors in order to attempt to sell them to customers. That means the numbers are more valuable in determining the relative success of particular titles to one another, rather than determining how many people are buying a particular issue of any particular comic.

Given that Thor: The Mighty Avenger just got the axe, something rather unusual for an all-ages book like that, since they all do pretty terrible in the direct market (presumably selling better outside the direct market, either through subscriptions or in trade format later down the road), I thought it might be worthwhile to look at how it sold in comparison to other titles that haven't yet been canceled.

First, here's Paul O'Brien's Beat column looking at Marvel's month-to-month sales for September, the latest numbers available. O'Brien notes that September's issue of Thor: The Mighty Avenger #4 placed at #177 on the top 300 list, with 10,887 units. His only comment? "Better than usual for an all-ages book."

That is a pretty decent number for one of the Big Two's kid-friendly, continuity-lite titles, although maybe the fact that the first issue had around 20,000 units ordered was the significant factor here, since the title's sales seem to have plummeted by 50% in just a few months. Was it the rate of decline more than the actual units being ordered that doomed the book?

It's also possible that maybe Thor: The Mighty Avenger wasn’t being viewed by Marvel as an all-ages book, and, compared to a Marvel Universe title, it was selling quite abysmally?

Or maybe Marvel simply got what they needed from the book already, and it didn't really matter if they stopped producing new issues of it or not. By the fourth issue, they would have had enough for a trade, and I suspect the reason for the Thor glut now wasn’t necessarily to get four-to-ten Thor comics into the hands of readers each month so much as to guarantee a big enough stockpile of solid, modern Thor comics on hand that Marvel could package enough of ‘em in to trade to sell to people who have their interest piqued when the movie comes out (I assumed this is why Dynamite has been aggressively publishing Green Hornet comics like there’s no tomorrow…once the movie window closes and "The Sterling Effect" takes effect, there effectively is no tomorrow for Green Hornet comics. At least, not a half-dozen in a half-dozen different Green Hornet continuities anyway).

Other than Spider-Man and Super Hero Squad, those are all reprints, miniseries or defacto ongoings in the form of a series of miniseries. It’s difficult to see what the difference between the all-ages Thor and the all-ages Spider-Man comics might be, especially given Thor’s far, far superior sales. Does the Spidey team just work half as cheap as the Thor team or something?

And because it's so much fun and perfectly healthy to turn every discussion of mainstream superhero comics into a DC vs. Marvel thing, why don't we also look at Marc-Oliver Frisch's column on DC's month-to-month sales for September of 2010.

At DC and its Vertigo and Wildstorm imprints, these are the books that were selling worse than Thor: The Mighty Avenger in September: The X-Files/30 Days of Night, Doom Patrol, The Spirit, Hellblazer, Sweet Tooth, Azrael, Daytripper, House of Mystery, Tiny Titans, Northlanders, God of War, Tom Strong and the Robots of Doom, The Authority, Batman: The Brave and The Bold, DMZ, Scooby-Doo, Where Are You?, The Mighty Crusaders, Ratchet and Clank, Fringe, Wildcats, DV8, Wetworks: Mutations (Just 5,083), Greek Street. That’s mostly Vertigo and Wildstorm and the unofficial "Johnny DC" imprint books, plus many of them are limited projects.

Still, there are plenty of ongoing concerns, notably a few them that are both on the DC Comics imprint and part of the DCU line, like Doom Patrol and Azrael, both of which seem safely uncanceled through February at least.

DC is therefore more reluctant to axe low-selling titles...is that a good thing or is that a fault?

Certainly it doesn’t seem likely that either Azrael or Doom Patrol are suddenly going to catch fire and reverse their downward trends—super-comics hardly ever reverse their downward trends in sales and, when they do, it's generally something that happens for a month or two. The goal, based on years of reading these charts, is apparently to lose sales very, very slowly, or to maintain the same sales, rather than improve them.

Looked at that way, Marvel's ruthlessness in cutting a title like Thor: The Mighty Avenger seems to make better business sense, however from a creator's point of view I'd imagine DC's reluctance to pull plugs is seen as a better situation. When DC finally does cancel Doom Patrol or Azrael, for example, those involved shouldn't be the least bit surprised or resentful that the publisher never gave the book's a chance.

The surprise regarding Thor: The Mighty Avenger is that it was cancelled before it was traded, and therefore makes it's success (or otherwise) against those other titles selling lower than it on a monthly basis harder to judge.

Marvel's Anita Blake and many of the Vertigo titles sell well in the trade market, and has a shelf life longer than many of Marvel or DC's usual trades. The Dark Tower adaptations are similarly very good perennial sellers for Marvel

Similarly, for all that the Johnny DC titles sell badly in the direct market they have a sizeable sales base for DC Publishing outside the US. I know for a fact that the Scooby Doo reprints in the UK sell around the 50,000 mark and they have similar numbers across Europe.

The final thing that may be a factor in Thor: The Mighty Avenger's cancellation could be the costs of the talent involved: I seem to recall from the cancellation of the Order and Next Wave that both Barry Kitson and Stuart Immomen were too expensive a cost in comparison to the sales involved, and the writers of both titles didn't want to continue without their collaborators. Thor: The Mighty Avenger without Chris Samnee wouldn't have been the same, and for all that it was my favourite Marvel comic while being published, I'd prefer it to end than continue as a shadow of its former self.

Interesting stats. I'm sad about the Thor book, it's a great read. Does Marvel not have any partnerships with 'real' kids book companies such as Scholastic, or Dorling Kindersley? It might be an interesting experiment to hand the collection co-rights over to a company for a token fee, and in return they put their marketing power behind it - surely they could shift plenty of copies of Langridge and Samnee's Thor come movie time.

my guess is that the creators are being moved to something higher profile. We all know why the odds were against Thor TMA (all-ages, out of continuity, glut) but it did well critically and commercially. So Marvel is probably moving the creators to something more viable and high-profile.

Kind of like Matt Fraction's Order got killed so he could write Iron Man.

It’s difficult to see what the difference between the all-ages Thor and the all-ages Spider-Man comics might be, especially given Thor’s far, far superior sales. Does the Spidey team just work half as cheap as the Thor team or something?

MA SPIDER-MAN may sell south of 6K in the DM, but it does insanely well as a subscription vehicle, regularly moving between twenty and thirty thousand units a month via snail mail. When a book has that kind of locked-in market, actual retail sales (DM or not) almost don't matter.