Another trade I waited for: Ant-Man & Wasp: Small World

Sometimes there’s just no way to win with Marvel Comics. I was mildly curious about 2011 series Ant-Man & Wasp, which teamed up the current Ant-Man Eric O’Grady, from the short-lived Irredeemable Ant-Man series, with the old and original Ant-Man, who is currently going by the codename of his dead-ish superhero wife, The Wasp.

It was a three-issue miniseries written and drawn by Tim Seeley, and artist whose work I like but whose writing I don’t remember ever reading. A miniseries about a bickering, shrinking, bug-themed superhero odd couple with nice art seems appealing enough, and would definitely be the sort of comic I would theoretically pick up on a light week.

Of course, Marvel priced it at $3.99 per issue, and, call me old-fashioned, but I hate paying 33% more than usual for something I might like, or am merely curious about, or wouldn’t mind reading. So I decided to wait for the trade, figuring that would make for a better value than $11.97 for 66 pages.

That came out last month, and was entitled Ant-Man & Wasp: Small World—and it cost $15 dollars, or $5 per issue!

Marvel did up the page count considerably, by adding over 70 pages of classic Ant-Man and Wasp adventures by Stan Lee, Jack Kirby, Don Heck and an H.E. Huntley from the pages of 1963 issues of Tales to Astonish.

Those are fine comics, but man, they sure are different in almost every conceivable way from the title story, the one on the cover and the one that folks who purchase this thing would most likely want to read. 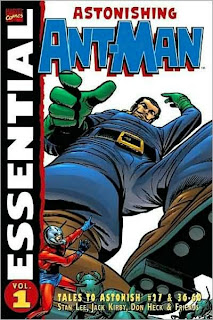 This concludes the Caleb Is A Grumpy Old Man Who Obsesses Over The Price of Comics portion of this increasingly rambling “review.”

So, the first half of the comic two-fifths or so of the comic, the collection of Seeley’s Ant-Man & Wasp series? Pretty solid stuff.

It no doubt helps to know a little of the history of the two characters and their relationship to one another. For example, that Ant-Man O’Grady stole his super-powered costume from original Ant-Man Hank Pym, and used it to embark on a quest for self-gratification. Or that the pair are now both Avengers; Pym a founding member who now teaches at a school for young heroes, and O’Grady for one of the black ops type squads (Either Secret Avengers or the Thunderbolts at the time this was published; I honestly can’t keep up).

It probably helps, but I don’t think it’s necessary. Seeley does a nice job of introducing the pair and their history quickly and efficiently in the first few scenes, fitting in a lot of exposition without resorting to a straight info-dump .

Seeley works in a couple of pretty cool big, crazy comic book ideas—including Pym inventing an artificial “heaven” for his fallen friend Bill “Goliath” Foster and a visit to Ditko-esque “Mindscape” in which the heroes are “sheathed in the contents of [their] subconscious,” presented as semi-transparent comic book panel suits—in the process of a fairly basic plot construction.

The bad guys—A.I.M., who amusingly wear costumes that resemble those of bee keepers, here fighting a couple of insect-themed heroes—steal something from Pym, and he must team up with O’Grady to recover it.

Seeley’s writes both characters well, giving them both likeable and unlikeable aspects, and defining much of those aspects through their conversations and actions. There’s an awful lot of content in such a short, simply-plotted story, with plenty of the requisite fighting and action, but a surprising amount of melodrama and even some deeper questions (Does Pym believe in the soul or heaven? What if they do exist? And, uh, what do his beliefs mean regarding his wife, whom I think is supposed to maybe be dead? Her death scene at the end of Secret Invasion didn’t actually make any sense).

While I was somewhat pleasantly surprised by the quality of his writing, I expected the art to be pretty great, and it was. Seeley has a clean, smooth style of the sort that used to dominate super-comics, but is increasingly rare as photo-reference and computer-aided drafting and coloring become more common place. (Seeley is inked by Victor Olazaba and brightly, simply colored by Val Staples)

Honestly, it was some of the cleanest, brightest, poppiest artwork I’ve seen in a Marvel superhero book in quite some time, and was a real pleasure to read.

Maybe not $4-$5 worth of pleasure per 22-pages of story, but hell, I guess that’s what library’s are for—so those of us who aren’t rich can still read the best stuff.

Some of those back-up stories are pretty awesome, by the way. There's one starring The Porcupine, a villain who dresses more like a haystack wearing a gas mask, a story where Ant-Man tries to shoot a monster in the face with a rifle that a bunch of ants hold up to him while he uses both tiny arms to squeeze the trigger and a sweet Don Heck-drawn story in which Egghead unleashes an awesome enemy upon Ant-Man, 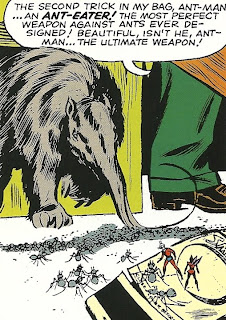 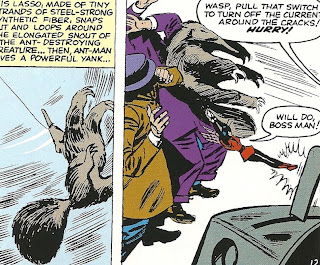 That's gotta be the only time in a comics history that a super-villain gets taken down by being hit with an anteater, right?
Posted by Caleb at 6:59 PM