The Importance of Covers: 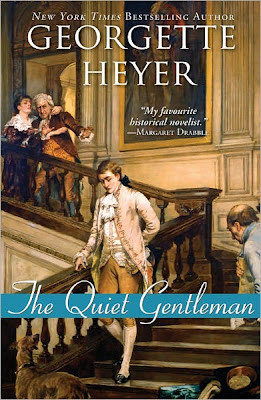 I've never read anything by Georgette Heyer, and know next to nothing about her (only that she seems popular enough to have novels published with some frequency, and to focus on historical novels). And stories in which people dress like these guys and hang out in places like that don't really interest me all that much. Hell, prose fiction in general doesn't generally interest me all that much.

Nevertheless, when I saw that cover on a copy of the book at the library, I was sorely tempted to bring the book home and start reading, just so I could learn what the hell was going on in that cover image, with the guy on the left reacting to the gentleman walking down the stairs as if the second man had been sprayed by seventy skunks. Or maybe the first man had taken a ton of acid and was having some crazy bad trip, and is hallucinating that the second man was made of writhing cockroaches or...Well, I can't imagine why that dude is reacting to the other dude like that, which is why I was tempted to pick it up, take it home and read it.

That used to be the whole idea of comic book covers, didn't it, before the days where characters posing or otherwise trying to be presented as iconic became the norm...?
Posted by Caleb at 7:44 PM

You got that right. I've bought the same new comic two weeks in a row before because a lot of covers today are just so blah.

When I buy back issues my decision is greatly influenced by how good the cover is.

Oh God, I LOVE Georgette Heyer! I've read ALL her books. She did a lot of Georgian and Regency's and is less as well-known for her more modern mysteries, but dagnabit, the woman could write.

"The Quiet Gentleman" is actually a particularly good one.

My wife is a huge Georgette Heyer fan. When I showed her this post, she said the following: " The covers are random paintings--they don't usually have much to do with the book. In this case, the guy walking down the stairs is kind of ostracized, but there is not a particular scene that resembles the cover." She says that is even more the case with her other books, where a random painting of a woman is usually used. So, like comics, sometimes her covers have nothing to do with story inside.

Thanks, Sean! Now I know I don't have to read it, as my curiosity wouldn't be sated by doing so anyway.

well, you don't HAVE to read it, but as a couple of your fans (me included) are gently pointing out, you might just WANT to! Heyer is fantastic, and SallyP is right: "The Quiet Gentleman" is a particular treat ...