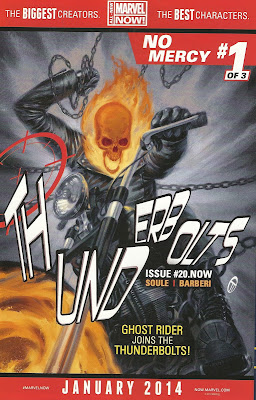 I saw this ad in this week's issue of Superior Foes of Spider-Man, and I imagine it appeared in plenty of other Marvel comics this week. Quick, glance at it for a moment, and then glance back down at the rest of this sentence: What exactly, is it advertising...?

For about a second and a half, I thought it was for an upcoming relaunch of Thunderbolts. Then I thought for the next second maybe it was for a three-part Thunderbolts spin-off miniseries, entitled Thunderbolts: No Mercy. Then I noticed the "#20.NOW", and realized that "No Mercy" must refer to a story arc, and, for some reason, they are promoting it as a title within the title; the "#1" is the same shape and size of the #1 on their "Marvel NOW!" books, though (And numbering installments of a story arc with a number following a "#" symbol, instead of going with, like, the word "Part" or something).

I'm not sure what they're thinking here...if they're insistent on putting "#1" on their comics more often, maybe as often as each story arc, perhaps they should abandon the monthly, ongoing numbering, and switch to a series of miniseries model that a lot of Dark Horse Comics used to use, particularly effectively with their Hellboy and BPRD and Mignola-verse titles.

I'm really looking forward to seeing the cover of, um, Thunderbolts #20.NOW (does that follow a book numbered Thunderbolts #20, like the ".1" numbered books did...?) to see if it will be as jumbled and confusing as this ad, or if it's just the ad itself and the cover will be a little easier to make sense of.
Posted by Caleb at 4:46 AM

I saw a two-page spread ad for The Trial of Jean Grey, the crossover between All-New X-Men and Guardians of the Galaxy. Same treatment with #1s in the upper right hand corner, but with the actual issue number at the bottom.

Making comics more accessible with clearly marked jumping-on points is a pretty great thing, but so is a sense of continuity.

Provided that each creative team has their own distinctive story to tell I don't see a problem with numbering titles as issues within a larger volume.