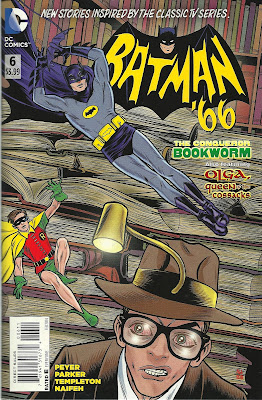 Batman '66 #6 (DC Comics) High five to writer Tom Peyer for the story title "Conqueror Bookworm." This issue contains two stories by two entirely different creative teams, both featuring characters from the TV show I am completely unfamiliar with, having either never seen episodes featuring them, or having never formed memories of them in my young, still-developing brain: Bookworm, obviously and, um, Olga, Queen of the Cossacks.

Peyer's story is drawn by Ty Templeton, a favorite artist of mine whose work I see way too infrequently on the printed page these days. His Bruce Wayne, who actually appears in this story about as much as Batman, is so closely modeled after a 1966 Adam West that it's a little unnerving.

Regular writer Jeff Parker is joined by Ted Naifeh (!!!) for the second story, in which Olga lures Batman to her in an attempt to make him hers and, when that fails, she attempts to have him devoured by bears (I've said it before and I'll say it again: Bears are the new gorillas). I love Naifeh's art, just as I love Templeton's, and the former is an incredible Batman artist who would make a great monthly one. It's obviously great fun to see him doing his version of such idiosyncratic, specific versions of these characters, and also to see him drawing so many images of bears.

The second story also features a one-page cutaway to the venerable Gotham Library to check in with Barbara Gordon, apparently setting the stage for a future storyline, that features the bespectacled Ms. Gordon in a mini-dress, standing on one of those awesome ladders on wheels to reach library books that are super-high on the shelf, while a co-worker lugs around a huge grimoire. Basically, it's everything I fantasized the library business would be like before I got into it (It's not).

Classic Popeye #17 (IDW) As noted the other day, this issue is only 32 pages, down from the usual 48. That's still a pretty great value by today's standards—most IDW books are only around 22-pages for the same price—but it's not of the awesome, I'd-be-crazy-not-to-buy-this value of the previous issues.

I'll give it another month or two, but I'm not sure Classic Popeye is long for my pull-list...

This issue features two stories. The first is a long, meandering one in which Popeye is summoned to Spinachovia via an extremely circuitous method, and the second is a Ham Gravy story with a pretty unfortunate portrayal of a Native American character, "Percy Pink Skin" ("Ugh" indeed!). And Wimpy only appears on the back-page gag strip!

I was almost tempted to read the prose story this month, given the strange illustration accompanying it, featuring an anthropomorphic but hunting a tiger. Why is the tiger so small?!, I thought (If it is a tiny tiger, that would mean two of the seven books I bought this week featured tiny tigers in them). But now that I look closely enough at it to scan it, I see the tree seems to be in proportion to the tiger, so maybe the bug person is giant?

I don't know. Or care. I'm still not reading it to find out. 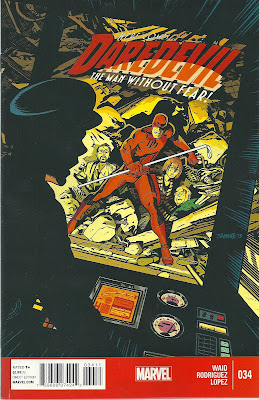 Daredevil #34 (Marvel Entertainment) Hey, nothing remotely like that cover happens in this book...!

So the Daredevil vs. The Serpent Society for the fate of the New York City justice system seems to be reaching an early climax, much more quickly than I would have expected (especially given how much longer the storyline with the super-disc of information on the Marvel Universe criminal empires seemed to last), and I wonder if I just misjudged how epic a storyline Mark Waid was setting up a few issues back, of if the decision to reboot the title somehow necessitated the change in direction coming a bit earlier than originally planned.

At any rate, Daredevil consults with Doctor Strange and enlists the help of a couple of civilian allies to draw out to capture The Jester and draw out the Society, a supporting character almost dies, and, in the cliffhanger last panel, it seems like another supporting character might be in a position to die soon (That would certainly explain a sudden move from New York to San Francisco!).

This issue is drawn by colorist Javier Rodriguez (with inks by Alvaro Lopez) and, once again, the storytelling style employed by Samnee and the artists he followed are so closely followed that there's nothing the least bit jarring about the transition of artists. This is really how these books should all work...at least within the same story arcs. 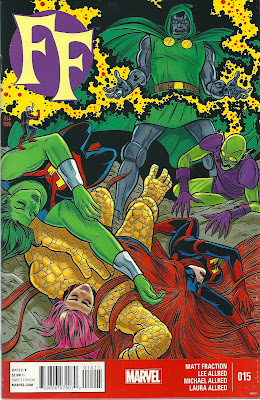 FF #15 (Marvel) So what's become my favorite Marvel book is reaching its climax (I think this is the penultimate issue), as The Fauxtastic Four, the Future Foundation and their allies launch an all-out assault on Dr. Doom, hoping to stop him before he can be cajoled into mingling his power and essence into Doom The Annihilating Conqueror.

A battle plan using HeroClix and a rhyming mnemonic device is laid out, robots fights robots, Sun Tzu and Caesar argue tactics, The Inhumans wreck embassies, The Fantastic Four and Lockjaw (Lockjaw!!!) appear and then its Victor Von Doom versus Scott Lang.

I can't even really put into words how much fun this comic is, in large part thanks to Mike Allred's artwork,which captures little moments like a tiny little tiger lounging atop a video game control pad with the same detail and vitality as the remote-controlled Avengers robots fighting Doom's robot guards.

This is all around great comics-making, and I might actually cry when the series is finally over. 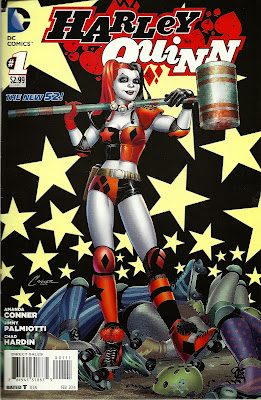 Harley Quinn #1 (DC) Villains are easy to write, but notoriously difficult to fashion series around, as even in today's more flexible moral superhero universes, you can't have the bad guys win and escape justice every month. I think Harley Quinn's a particularly difficult villain to get right, given her connection to The Joker, Exhibit A in Evil in the DC Comics Universe, and that in every media or "continuitiverse" I've seen her in, she works best when playing off of another character; she's a sidekick, a partner and a foil, not a star.

I think New 52 Harley Quinn is in a particularly hard place to fashion a series around, given how they've moved her from clueless and crazy to savage and evil in the pages of Suicide Squad.

So I do sympathize with writers Jimmy Palmiotti and Amanda Conner, but man, this book just didn't work for me at all—nothing landed. I liked Chad Hardin's art an awful lot though, and as I was nearing the end of the book, I found myself wondering why DC hadn't paired Hardin with Injustice writer Tom Taylor, given how well he writes the scantily-clad, evil Harley in that comic (She's actually funny there, although, again, she generally has a character to play against; in that case, it's Green Arrow).

They seem to be attempting to turn her into the DC Universe's Deadpool, which may be a valid take, and, given the character's fans and the fact that it can always use future Batman line crossovers (like "Night of the Owls," "Death of the Family," "Zero Year," etc) as an additional sales crutch, chances are the book will work just fine in the current market, perhaps even outliving the previous, pre-New 52 volume of Harley Quinn.

That doesn't make it a good comic, though. 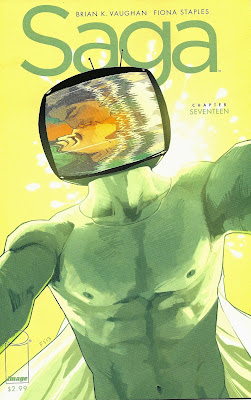 Saga #17 (Image Comics) The Will utters what may very well be his last words. Marko's mom Klara gets shot with a pretty gigantic gun. Prince Robot IV gets shot, repeatedly. D. Oswald Heist is struck in the face by The Will's lance weapon thingee. I'm pretty sure we've witnessed at least one of them die in this issue.

As a reader, that's one of the scary aspects of Brian K. Vaughan and Fiona Staples' narrative, and one of the signs of just how strongly conceived, written and designed the characters are and how effective the drama is. Not only could any of them die at any time, but as a reader, you worry about just that, and feel bad about it when someone does. 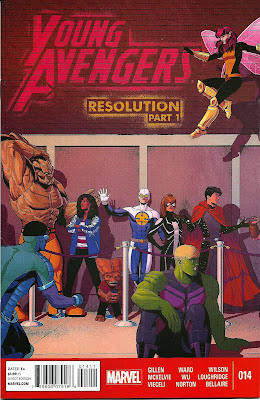 Young Avengers #14 (Marvel) This is the first half of an "after party" for the series, set on New Year's Eve, it features our heroes from the series celebrating their victory over the interdimensional invasion force/New Year's Eve with all the young heroes that cameo-ed in the last few issues. Regular writer Kieron Gillen and regular artist Jamie McKelvie are joined by art teams Emma Vicelli and Lee Loughridge, Christian Ward and Annie Wu and Jordie Bellaire, each drawing various character-centric segments.

Some of the segments of art are better than the other segments of art, and the story is mainly comprised of resolving relationships: Kate and Noh-Varr breaking up, Miss America revealing to the readers what the hell she's even doing here, Billy and Teddy reaffirming their love, etc.

I'm quite eager to see what Marvel does next with this title and these characters. This started incredibly strong, but as a 15-issue series, it seems in retrospect to be a light, meaningless trifle. It's the length of a graphic novel, not an ongoing series, and thus it seems like it should have been about something or made a statement of some kind to justify its existence, since "existing once a month indefinitely" so obviously wasn't it's raison d'etre after all.
Posted by Caleb at 10:54 PM

There really were some astonishingly good books out this week.