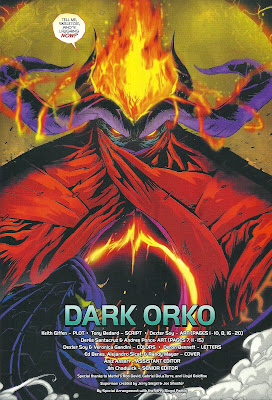 DC Universe Vs. Masters of The Universe #3 (DC Comics) Hey, look! It is a 100% perfect example of one of the things wrong with modern superhero comics! Dark Orko! I will cover this book at greater length later—as I did with the first issue and the second, because a DC Universe Vs. Masters of The Universe crossover series is so goddam important to me—but I wanted to note that I brought it home from the comic shop today (and thus it gets included in this column) and that it is pretty funny. I think I laughed at—not with, at—it maybe eight times or so, the above splash page being the final of those eight or so laughs. Dark Orko...Jeez. I'm pretty sure I would have found that concept immature back when I was young enough to play with He-Man guys...


The Fox #2 (Archie Comics)  Mark Waid may just be scripting this comic—artist Dean Haspiel wrote the plot—but he sure is working hard on that scripting, apparently devoting all of the energy he saved by not having to handle the plot to that scripting, so that the first page opens with The Fox narrating what he sees in the alien dimension he was press-ganged into using, highly poetic descriptive language and, later, writes a very long passage in the amusingly broken english of the alien queen who did the press-ganging, her speech pattern a sort of elaborate ESL gobbledygook: "You are miracle brought to hero me from evil druid who captive my diamond empire and helpless my husband with horror voodoo spell," she starts, and goes on like that for five pages.

It's a fun, funny comic book, as was the first issue, and it's rather delightful how different it is in setting and nature than that first issue, as here The Fox is...well, he's attempting to succeed in the quest that queen told him about. His wife, outfitted as She-Fox, appears in this issue, as well; I kinda like her costume design (for one, it's red, the color of an actual fox), but I'm not so sure about the fox icon on her face like that...it just seems a bit much to have an animal icon on an animal mask, like Batman having his Bat-symbol on his forehead, you know?

The 18-page Fox story, uninterrupted by ads, is then followed by a six-page SHIELD story by J.M. DeMatteis, Mike Cavallaro and Terry Austin, and there are two one-page prose profiles of both heroes, and a two-page prose article by Haspiel...and it's got a heavier, fancier, paper-stock cover...and it only costs $2.99. Remember: Marvel charging $3.99 for their books isn't necessary and is, in fact, monstrously evil. Monstrously! 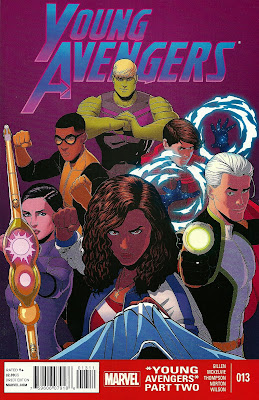 So, you know how they're relaunching Fantastic Four, and that will cost $3.99? And how they just canceled Daredevil, which they plan to relaunch with the same creative team, but with a $3.99 price tag...? What if Marvel cancel and replace all of their $2.99 books with $3.99 books, gradually?

Like, this one is only $2.99. And it's being canceled. Sorta. Seems like a planned cancellation. Like, it was originally announced as an ongoing, but is really just a maxi-series, and I would not be at all surprised to learn that there will be a new volume of Young Avengers, probably launched with Young Avengers #1.All-New Now!, or All-New Avengers #Now.001 or some such nonsense.

Anyway, this is the climax to the 13-issue story arc about a new line-up of Young Avengers forming that Kieron Gillen has been writing for about a year or so now. It is super anti-climatic, as just about any comic book spending 200 pages and a year or so building up to a five heroes plus five villains fight scene, with the power of love saving the day, all within a single issue, would almost half to be.

That definition of love offered in a two-panel sequence, though? That was pretty awesome. High five, Gillen!

There's only one issue, left, I think, an epilogue one of sorts. Gillen better hurry up and explain what the F is up with the Patriot-thing and maybe give Miss America some form of characterization or reason for existing at all...!
Posted by Caleb at 8:48 PM

I adore Haspiel, enjoy Waid. You have sold me on The Fox. Has Red Circle comix been around for a minute and I haven't noticed? (Easily possible; I've been awol from my LCS for a few months now.)

Has Red Circle comix been around for a minute and I haven't noticed?

As far as I know, the only new Red Circle book to precede The Fox was The New Crusaders, which I think was a digital-first series that was then printed up like a normal comic book. I read the first two or three issues of that, and lost track of it.

The premise was that an old villain killed most of the Red Circle characters, and their children are sorta forced into becoming legacy versions, with the original Shield, now sporting a gray beard, acting as their mentor. I liked it okay, and would have probably kept reading, but missed so many issues I ended up figuring I'd wait for the trade. Which is actually now available, I think (But The Fox is much better).

I have to admit that I loved Young Avengers with a deep dark passion.