DC Universe Vs. Masters of The Universe #3: It comes to this

To recap, DC Comics recently published DC Universe Vs. Masters of the Universe #1 and #2, part of a miniseries event-tacular, in which the characters from the Masters of the Universe universe come to the universe of the DC Universe, where He-Man's redesigned archenemy Skeletor and DCU footnote Black Alice are attempting to siphon off all of the mystical energy forces, at the behest of a mysterious collaborator.

In an effort to save the day, He-Man's mom teamed-up with John Constantine, and then He-Man, Teela and Evil-Lyn teamed up with them, and then they all teamed up with Batman, and then Skeletor possessed the Justice League and sicced them on Batman and He-Man, and so He-Man had to totally stab Superman to death.

Which brings us to the third issue, where two more Justice Leagues join the adventure, more Masters arrive on Earth-New 52, and Skeletor's unseen ally is finally revealed to be the most hilariously dumb villain imaginable.

Also of note, the creative team continues to grow, always a sure sign that things are going just great behind the scenes.  For the first issue, Keith Giffen did all the writing and Dexter Soy handled all of the art, right down to the colors.

For the second issue, Giffen plotted, Tony Bedard scripted, Soy handled almost all of the art, but took on a co-colorist.

For this issue, Giffen plots, Bedard scripts, Soy is credited for the art on 16 pages, while Derlis Santacruz and Andres Ponce are credited with art on 6 pages, and there are still two colorists. 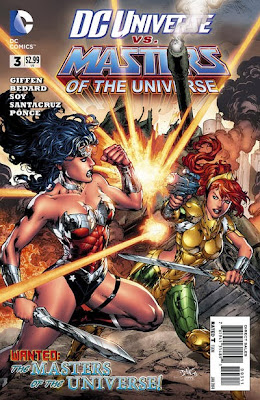 This installment's cover, drawn like those of the previous two by Ed Benes, features Wonder Woman fighting Teela, as does not happen at all in this issue, but sort of did last issue (The fight was a little more one-sided than this cover implies, though; Wonder Woman flying kicked Teela's apparently invincible spine from behind, and then started trying to strangle her apparently invincible throat with the magical lasso of truth).

Their fight occurred in front of Wayne Manor, although for the purposes of this cover, it is taking place in front of a smashed up tank (?) in front of....some pretty vague buildings. I'm no architecture expert, but the vague buildings look a little more Eternian than Earth-ian to me, but, like I said, I don't know.

After Cyborg paraphrases South Park—"Good God, they killed Superman!"—and He-Man looks a little sad about impaling Superman, Constantine tries to talk sense into the possessed Leaguers, while using as many signifiers of the fact that he's British as possible: "You must have been talking about this Skeletor bloke that He-Man and his mates are looking for." They were just about to check the boot of the lorry, but it was almost tea time, and they had to have a kip before getting kitted out to continue looking for that Skeletor wanker. 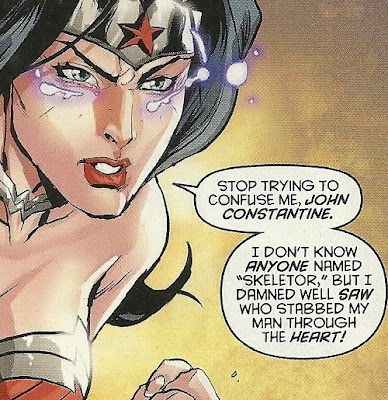 "Stop trying to confuse me, John Constanine," Wonder Woman says, crying out glowing Skeletor possession energy like floating energy bubble tears. Women! Always being confused, by emotions! "I don't know anyone named 'Skeletor,' but I saw damned well who stabbed my man through the heart!" I'm still getting used to the idea of Wonder Woman and Superman dating. But I don't think I will ever get used to the idea of Wonder Woman calling Superman (or anyone, really) "my man."

He-Man surrenders himself to the five Leaguers who aren't Batman, SHA-KOOM-ing himself from He-Man mode back into Prince Adam mode, and preparing to hand over his sword. Evil-Lyn isn't having any of it though, and calls upon the four elements, including the flame from Constantine's lighter—ever notice how he always seems to be lighting up a cigarette, but never smoking one or putting one out?—to cast a spell that teleports Teela, Prince Adam, He-Man's mom, Constantine, Xanadu and herself away to Metropolis...againt Adam and Teela's will.

Xanadu proposes a new course of action: The Eternians search for Skeletor, while the two DC magic folks summon help from their associates.

PAGES 7-8:
While Batman bickers with the League about who they should be hunting—Skeletor or He-Man—Superman's bloodless chest wound starts to leak lightning, and he totally disappears in a cloud of dust. Wonder Woman's arm-bands, which number two on this particular page for some reason, also disappear, as she's not wearing any on the next page. Is that too part of "a curse on He-Man's magic sword," as Aquaman wonders, or just another example of the hurried, careless, far below sub-standard art on the series?

Seeing the rest of the League still aren't thinking clearly, Batman says something funny, which I won't spoil, as the book offers so few legitimately pleasurable moments.

Apparently, Batman and the surviving Leaguers are splitting up as well.

PAGES 9-10:
At "The House of Secrets," Black Alice is screwing around on her laptop, while Skeletor stands nearby, posing. The death of Superman has already made the TV news, complete with photo images, despite the fact that there was no media present at the battle and his body disintegrated completely already.

Perhaps Cyborg took the time to fire off a press release before he and the Leaguers went off to hunt down He-Man...? (Good thing there were no media present too, as the fight took place in front of the house of Gotham City billionaire philanthropist playboy Bruce Wayne, and created a gigantic hole leading directly into the Batcave).

This is all according to Skeletor's plan. The heroes of Earth will hunt He-Man instead of him, allowing his magic siphons to do their work.

Back on "Eternia," as the caption says, we finally get a fairly decent introductory image of what the Masters apparently participating in this series. Man-At-Arms, Moss Man, Stratos, Battle Cat and Roboto all pose as Man-At-Arms uses one of the Horde's "infernal machines" to make the one-way journey from their world to the DCU, where they hope to find their lost allies, and a way bring them  back to their own world.

They arrive in Greenwich Village, where the roaring giant green tiger wearing a mask scares all the bystanders away. Man-At-Arms manages to grab a little boy who has forgotten all he's learned about stranger danger by the wrist, and he and his compatriots quiz him. 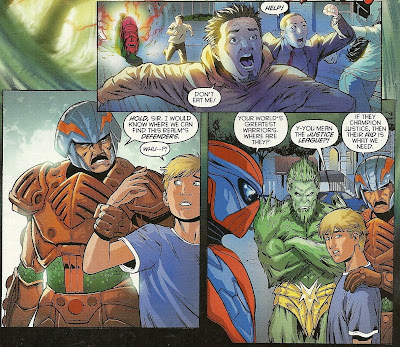 That seemed somehow off to me, so I later went to have a look at the original, which was just the Beast Man mold covered in green, lint collecting fuzz and smelling of pine. 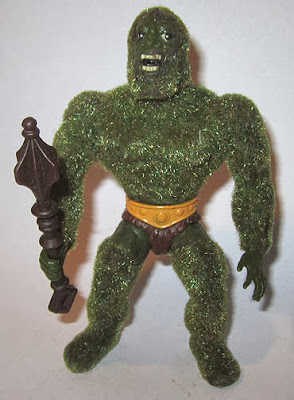 (Moss Man was, I believe, the first and only action figure that was also an air-freshener. If I had a double, I would have hang it from my rearview mirror in lieu of one of those flat, cardboard air-fresheners).

Anyway, he wore a metal belt, furry under pants, and carried a brown, metal mace. So I guess there is precedent for Moss Man not wearing plant-based loin coverings. Still strikes me as weird, though, like Swamp Thing wearing chainmail.

And hey, speaking of Swamp Thing...

At "The House of Mystery, Headquarters of Justice League Dark," we see the associates Constantine and Xanadau had in mind: Swamp Thing, Frankenstein, Deadman and Red Cabbage. 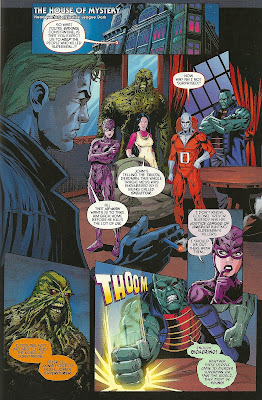 Well, we may not get to see match ups like Mer-Man vs. Aquaman, Beast Man vs. Animal Man, Buzz-Off vs. The Red Bee (or, more likely, Bumblebee) or Sy-Klone vs. Red Tornado, but hey, at least a Moss Man vs. Swamp Thing confrontation seems likely...!

Then Man-At-Arms makes the mistake of mentioning the name He-Man. 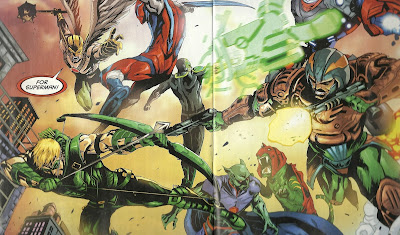 "They're with the killers," Trevor spits,  TAKE THEM!" Instead of panels showing the two groups of combatants in combat, these two pages are devoted to a splash involving the characters all about to fight (Which should really be a short fight. Green Lantern or Manhunter should be able to defeat the super-powerless Masters in about two, maybe four seconds).

The creators apparently tried to match the two sides up, which doesn't really work, as the flying Hawkman and the flying Stratos are the only two characters who have anything in common. Green Lantern creates a robot-looking ginat green arm to reach for Robot, Man-At-Arms and expert archer Green Arrow fire at one another at point-blank range (M.A.A. misses; I assume when GA releases his arrow, he's going to miss too, although I hope he has a razor arrow in his quiver and manages to take out Man-At-Arms' mustache with it next issue), and J'onn J'onnz is left to deal with Battle Cat...maybe because they're both green? To make himself more suitable still to fight a giant green tiger, J'onn uses his amazing shape-changing powers to...grow cat ears...?

Moss Man is off-panel; perhaps he'll be fighting Trevor, who doesn't appear in the splash page either.

Black Alice quizzes Skeletor about his mysterious master again, who has so far only appeared as a pair of floating eyes or a voice. That ally is finally revealed in a hilarious final page splash as, get this, Orko. 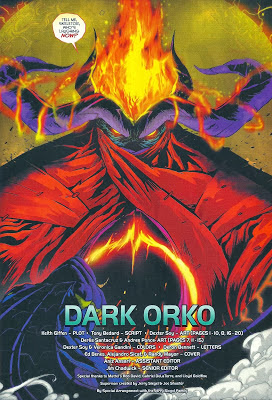 If you are either too old or too young to know who or what Orko is, he was a comic relief character created for the original Filmation cartoon series He-Man and the Masters of the Universe (a character that later made his way into the toy line; unlike most of the line, Orko was a cartoon character first and then a toy, rather than vice versa).

As for what he was, other than the most annoying aspect of the cartoon, the floating longsleeve t-shirt, eyes, scarf, hat, ears and hands was supposedly a "Trollan," which is kind of like a troll, but with an "-an" at the end, and he was a magical emigree to Eternia from a different dimension. 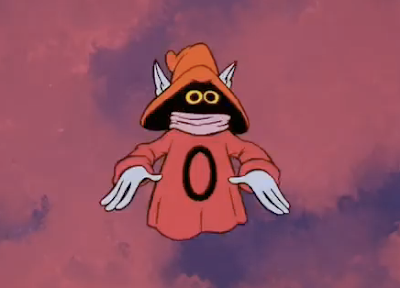 His redesign is thus even more dramatic than He-Man and Skeletor's.

In addition to being one of Adam's besties and one of only three individuals (on the show, anyway) who knew of his dual identity as He-Man, Orko served as the court jester to King Randor. That makes his dramatic comment to Skeletor in the last two panels particularly weird: "They always laughed at me, you know? Tell me, Skeletor, who's laughing NOW?"

Well me, for one.

Outstandingly funny. Also, I feel like I should apologise for the existence of this, even though I have nothing to do with its creation.

"Dark Orko" is too long. Call him "Dorko". Fits better.