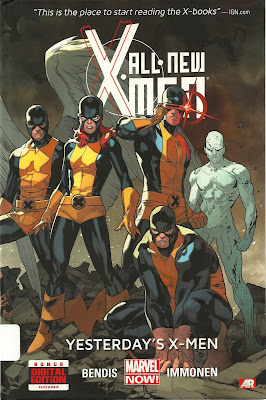 •I still find it amusing that of all the possible X-Men titles out there, basically Any Adjective + "X-Men", they chose to call this particular title All-New X-Men, as it is the X-Men title starring the five original X-Men, displaced in time and brought to the modern Marvel Universe. It is therefore the book about the least new X-Men of all (Shortly after this title launched, Marvel re-launched Uncanny X-Men with a new #1. It is also being written by Brian Michael Bendis and is serving as a companion to this book; they probably should have switched the titles of the two).

•Less-than-accurate title aside, I really like the new logo.

•The book is visually a great one all around, from logo to coloring. That's due mostly to the contribution of pencil artist Stuart Immonen, inked here by Wade Von Grawbadger, who is one of the most perfect superhero artists, capable of drawing action and emotion, spectacular powers and run-of-the-mill, day-in-the-life stuff equally well, and doing so with enough flair and individual style that the artwork is nevertheless exciting and his (This may be comparing apples to oranges, but just before sitting down to write this, I re-read an issue of Forever Evil that David Finch pencilled, and Immonen's work looks even better when seen as a visual chaser, rather than something independent; I've never been a Marvel vs. DC kind of guy, but, speaking objectively as someone who reads as much from both publishers as I can, there is an incredible gulf in quality between the average DC comic and the average Marvel comic at the moment; probably the widest in my own personal memory).

•The premise of the book follows closely on the heels of Avengers Vs. X-Men, in which you'll recall Cyclops, Emma Frost, Namor, Colossus and Magik were possessed by The Phoenix Force, went completely bonkers and took over the world—temporarily—before the Phoenix Force was ultimately dispersed, un-doing the "No More Mutants" thing so that now new mutants are, um, mutating again. It ended with Cyclops essentially the worst villain in the Marvel Universe, having completed a years-long slide from having grown up to be his generation's Charles Xavier to growing into his generation's Magneto. Driving that point home, he killed—or, more likely, "killed"—Xavier and is now hanging out with Magneto.

In the pages of some comic I didn't read, Cyclops must have escaped, and now with the help of Magneto, Magik and a rather reluctant Emma Frost, he's building his own X-Men school and trying to save/recruit the new mutants popping up all over the world.

This puts the real X-Men in something of a bind, as most of them would rather not go to war with Cyclops again. Even if they win—and given that there's about 195 of 'em, they're gonna win—it would mean "mutant civil war" and maybe ending up killing Cyclops.

Bendis has Iceman, one of the original X-Men and one of the two modern X-Men in the book who has known Cyclops longest and best, says "I'm telling you, if the young us saw what was going on today it would feel worse than the mutant apocalyptic nightmare we used to worry about!" He says some variation of this enough times that Beast eventually hears him and decides to travel back in time, convince the five original teenaged X-Men—Cyclops, Jean Grey, Angel, Beast and Iceman—to come back to the present with him in order to confront modern day Cyclops.

Things go less than perfectly, as Beast is in the process of dying from another of his periodic mutations while hatching this plan of his, and the original X-Men scare Cyclops off before getting a chance to give him a good talking to, and they see enough of the modern Marvel Universe to know that it's all screwed-up, and not the future they wanted, so they intend to stay and fix it.

•I imagine this read much, much better in trade then it would have in single issues, and not just because everything Bendis writes reads better in trade then in single issues, or because it was a ridiculously expensive $4-per-20-pages. If you just read my synopsis above but haven't read the comics themselves, then you probably see some holes and have some questions  about Beast's cockamamie plan. It's all explained within this volume, but reading it in one sitting, questions about why he would do something that nutty or how it wouldn't destroy the integrity of the space-time continuum or whether characters' continuity are wonky only nag for 20-40 pages or so, whereas if you were reading this in monthly installments, you might spend two months wondering why teen Jean can read minds, or how Beast thinks he won't re-write the past by brining his past self to the future and so on.

•This may have been the best Bendis Marvel comic I've read in a while...certainly since the last time I read any of his Ultimate Spider-Man comics (many of which Immonen also drew—coincidence?). The one time he writes particularly Bendisian is during the fourth issue, in which the first two and a half pages are straight Cyclops narration, which eventually bleeds from narration boxes into old-fashioned thought bubbles, and then teen Jean starts yelling at him to "Stop!! Stop Talking!!" (Because she could hear his thoughts/Bendis' narration, of course). 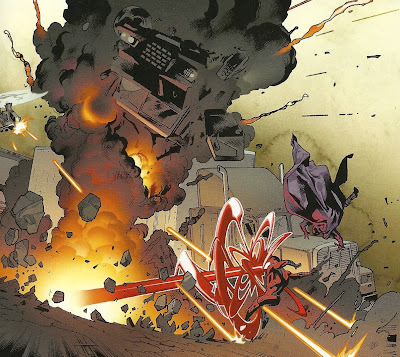 •The Phoenix Force apparently altered the abilities of those that were in possession of it and/or blasted with it, so Cyclops, Magneto and Emma are all experiencing difficulties with their powers. I really like how Immonen draws Cyclops' eye-beams in this story, coming out of his visor in a straight line, but surrounded by a corkscrewing aura of energy. This is apparently because he can't control it quite as well as he used to, and/or it's more powerful, but it also makes for a strong visual contrast with teen Cyclops' eye-beams, when they try to eye-beam one another later in the story.

•I also like how colorist Marte Gracia renders Magneto's magnetic powers, generally as subtle tracers of energy in the Mutant Master of Magnetism's favorite color: 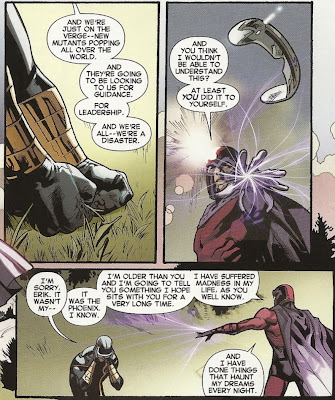 •Beast doesn't die, of course, but he does mutate...again. I think he's meant to be a new version of "ape Beast," but he doesn't really look like any of the previous Beasts, and seems more 'Squatchy than any past incarnation I can remember: 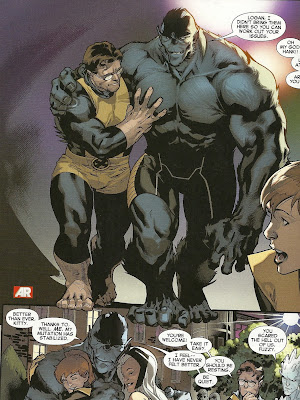 •I'm not entirely sure if Bendis realized it or not, but one aspect of his story echoes that of Grant Morrison's millennial run on the franchise, a run that has mostly been undone as much as possible (And Bendis has has a weird relationship with Morrison concepts in the Marvel Universe, pretty much un-writing Morrison's Marvel Boy during his time on the Avengers franchise).

Bendis has Grown-Up Cyclops repeatedly blaming the Phoenix Force itself for the evil acts he committed while all Phoenix-ed up in Avengers Vs. X-Men, assigning it responsibility for things like killing Xavier and taking down Emma and so on. Magneto essentially tells him that's bullshit, and that he's just deflecting responsibility to make it easier to deal with.

Morrison's New X-Men opened with Cyclops questioning his own morality, assigning blame for some of his own dark thoughts to a time in the recent past (before I read any X-Men comics) when he was possessed or under the control of Apocalypse. So when he thinks something bad or wrong, he questions whether it's him thinking it, or if it's the linger effect of Apocalypse' influence. Ultimately he comes to the realization that he's him and his own thoughts, and that he was assigning blame for his own rebellion from emotional repression to an outside other.

•Okay, now I have a question for any regular readers of X-Men comics: Where's Angel at these days? As teenage Angel notices, he seems to be missing from the modern X-Men, and no one seems to want to tell him where he is at the moment. Is he currently dead too?
Posted by Caleb at 10:51 PM

"Okay, now I have a question for any regular readers of X-Men comics: Where's Angel at these days? As teenage Angel notices, he seems to be missing from the modern X-Men, and no one seems to want to tell him where he is at the moment. Is he currently dead too?"

Basically, he was sort-of killed off. If I remember correctly (frankly, I'm too lazy to go back and check the exact details, so someone correct me if I'm wrong), Angel is possessed by Apocalypse, and then killed by Psylocke. However, he wasn't dead, but instead had amnesia (he also lost his metal wings). He then became a student at Wolverine's school.

Past-Angel does meet Present-Angel in the second volume of All-New X-Men, although it's fairly brief. The second volume also contains probably the most Bendis-y issue thus far (#7), which is literally nothing but 20 pages of dialogue....which I did kind of enjoy.

No wonder nobody wants to tell Angel.

It`s true, then. This is actually good. I still wont read it, I`m guessing.

Scott got it pretty much exactly right. It happened in Uncanny X-Force when Remender was writing. Essentially, Angel looks like a literal angel now: long hair, bird wings, semi-nude.

This comic is odd in that there is no real plot, there is no real build up to any significant story, and yet, it is actually really engaging. I wouls definitely consider this the current flagship book for the X-Men franchise. And Caleb, I am sure the All new X-Men title is at least sorta ironic.