Will it help to talk about it?: Processing our grief over the demise of PictureBox 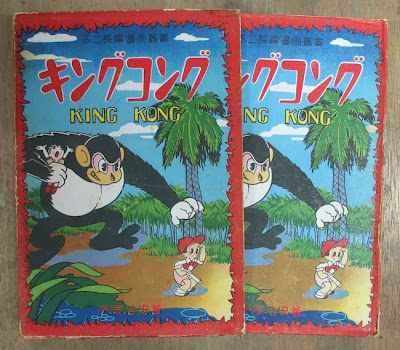 I found that image at TCJ.com on one of the occasions upon which I've googled "King Kong" and "Tezuka," which I've done every so often since I learned that Osamu Tezuka made a King Kong manga of some sort. It was apparently posted by Ryan Holmberg. Relatively high on a list of things I love most in this world are King Kong and Tezuka's comics, so this is one of those dream comics of mine that I've wanted to be able to read, preferably translated into English, ever since I became aware of its existence. Perhaps it would ultimately prove disappointing, like Tezuka's Lost World (which Dark Horse published a few years back), but, worse comes to worst, it would still be a Tezuka comic with a giant gorilla in it.

The last time I heard mention of it was in the Ryan Holmberg translated and edited The Mysterious Underground Men, part of Holmberg's Ten Cent Manga series being published through PictureBox, the intent of which was to highlight western influence in post-war, mass-market Japanese comics. Only two volumes have been released; Tezuka's The Mysterious Underground Men, a breathless, digest-sized adventure comic I just covered at Robot 6 yesterday (click here, and scroll 4/5ths of the page down), and Shigeru Sugiura's crazy-ass, comedy cover version of Last of the Mohicans (reviewed here; second one down).

They were both great fun to read, and, like everything PictureBox published, great-looking books. I was really looking forward to future installments of Ten Cent Manga, and hoping that before long we'd see a King Kong entry into the series; after all, King Kong is a western film, and Tezuka's adaptation came out in 1947 (i.e. post-war), and Holmberg already included one Tezuka book, and, he seems to own a copy of it...or at least to have taken a picture of a copy of it to post on TCJ.com.

So when I read this the other day, fell to my knees, raised my balled fists to the heavens and screamed "Nooooooooo!", it was in part because my dream of a a Ten Cent Manga version of King Kong was evaporating (Which part? The sixth, seventh and eighth of the o's in "Nooooooooo!").

By the way, did you click on that last link? You should click on that last link. It will take you to The Comics Reporter, where you'll find Tom Spurgeon interviewing Dan Nadel about the demise of PictureBox. Good news? It doesn't seem like it has anything to do with lousy sales or the market place rejecting Nadel's business model or anything like that. Rather, it seems like Nadel is going to focus on things in his life that aren't PictureBox. Bad news? No more PictureBox. Silver lining? Hopefully many of the artists associated with the publisher have, by this point, established themselves to find other publishers willing to take on their future work (And hopefully someone picks up Holmberg's Ten Cent Manga line; King Kong adaptation or no, that seems like a wonderful line that shows a lot of promise).

Here are, I think, the three great things about PictureBox, and the three things I'll miss the most.

1.) They published great-looking books. I'm not talking about the interior art, although that tends to be pretty damn good, but the design of their books. PictureBox certainly seems to have taken the book-as-objet d'art approach to publishing, and nearly every publication of theirs that I've read is the kind that I like to hold and look at. The kind that doesn't just sit on a bookshelf or night stand or coffee table, but decorates it.

I have a bookshelf full of New 52 trades, and another bookshelf full of Marvel trades from a few years back. They all have uniform designs, and, spine out on a bookshelf, they look disgusting (Well, that's a strong word; they don't look pretty though). They certainly don't look as lovely as my bookshelves containing Drawn and Quarterly or Fantagraphics or AdHouse or Oni or First Second books. Or PictureBox books, obviously. If I were a set-designer or interior decorator and needed to have some comics books strewn about, I'd more than likely use PictureBox releases (And some D+Q books, probably).

Although, there is that goddam Lauren Weinstein Goddess of War comic, which has been a thorn in my side since I brought it into my home...four homes ago. Don't get me wrong, it's a great comic, and I loved reading it, but it is sooooo big (It's a floppy, but a floppy the size of a New York City efficiency apartment) I've never figured out where and how to store it. Originally, I slipped it back in the gigantic cardboard envelope it was shipped in, and hid it behind a bookshelf and the wall, as that was the only place it fit and wasn't in the way.

It is currently in my a closet at my mother's house, resting atop a stack of a little cardboard igloo of eight longboxes containing DC superhero comics, blanketed by framed original art from local Columbus artists that I no longer have the wall space to hang.

Anyways, Goddess of War is never far from my thoughts, whenever I think about different comics formats, and worry about moving my comics midden.

2.) They published the work of comics artists that other publishers probably wouldn't have. Are you familiar with the work of Yuichi Yokoyama? PictureBox just published his World Map Room, in which a bunch of mysterious figures with oddly shaped heads travel through a mysterious city for a mysterious purpose, and take a meeting. It's fucking nuts, but also kind of hypnotic, addictive and beautiful. A few years back, they published Yokoyama's Garden and Color Engineering. I didn't read that last one, but Garden? Holy shit. I've never read anything like it. (After some consideration, although World Map Room seems to have more story and to be funnier—thanks to the author's notes at the end—I think I prefer Garden as both the more fun of the two, and the better of the two).

It's hard for me to imagine another publisher publishing such work.

Not that PictureBox was the only publisher to publish avant garde work, of course, or that all of the artists they publish work from were so "out there" that no one else would touch them—I've already mentioned Tezuka, who is one of the most mainstream artists in the whole history of comics; PictureBox has also published a book by Brandon Graham (whose work has also been published by Tokyopop, Image, Oni and Alternative Comics), Renee French (who recently published a kids book with Toon Boooks), and books involving artistic folks better-known that most folks in the entire field of comics (The band Wilco, for example).

In fact, as Spurgeon's article makes clear, some other publisher's are at least interested in some of these folks' work continuing under their umbrellas.

Still, there are a lot of PictureBox books, like those of Yokoyama's, for example, or Brian Chippendale's If 'n Oof or French's H Day or CF's Powr Mastrs that I have a hard time imagining reading from another publisher (particularly upon the time of their release).

3.) I was on their press list, and thus got press copies of their books. There are few things more tragic than a source of free—and generally excellent!—comics drying up. Sigh...

As part of his article on the subject, Spurgeon listed what he called "a limited bibliography" of the publisher's publications. One thing I noticed while reading it is that their offerings seemed to get stronger year after year. I don't know if this was truly the case, or just a matter of perception—perhaps I read more of their more recent books than their older books, perhaps my tastes started to gradually align with those of Nadel's over the years—but 2013 seems like their strongest year ever; 2012 seemed stronger than 2009, and so on.

There is one more silver lining to PictureBox's going away. They're having a "massive" 50% off sale. I can personally recommend Gold Pollen and Other Stories (another Holmberg-edited manga collection), the aforementioned Mysterious Underground Men and Last of the Mohicans and Garden, Frank Santoro's excellent historical drama Pompeii and Anya Davidson's hilarious School Spirits (both reviewed in this post), Matthew Thurber's weird drama/adventure 1-800 Mice, Chippendale's If 'n Oof and, of course, Goddess of War, if you don't mind having to find a place to stick it in your apartment.  (I'd link to reviews of all of those, but some of 'em were for the now-defunct Blog@Newsarama, which I think recently threw all of its content into the sun, for some reason).

As for me, I'm going to try and get that Brandon Graham art book, if I can figure out how to buy stuff through the website, and maybe some Powr Mastrs (I never read past the first volume) and some more Yokoyama... (UPDATE: Actually, I ordered the Graham book, Brian Chippendale's Maggots and something called Caleb's Adventures in Wonderland, simply because I like the title; I struggled for a while over whether or not to get Negron too, but ultimately decided against it...and now I feel Sean T. Collins judging me from afar).
Posted by Caleb at 8:11 PM

I hear you on Goddess of War. I keep it on the top shelf of my book case, and even though I put comics in alphabetical order, I never move it because that's the only place it fits. I also keep it between two thick hardcovers. Fun stuff trying to find out where to store it!

The photo of Tezuka's King Kong comes from the Aomushi Library in Fukushima. It is not as King Kong-ish as you would think from the cover. Anyway, there is little chance of it appearing in English anytime soon. Because of some stereotypical depictions of African natives, there is hesitation on Tezuka Pro's part even to do a reprint in Japanese.

However, I do own a couple of King Kong akahon manga from the 30s and 40s, which are much crazier than the Tezuka, and by obscure artists so there are no copyright issues aside from that controlling the big gorilla himself. And yes, they were in the hopper for the 10 Cent line.

Please note that the "Unknown" who posted the above post is actually Ryan Holmberg himself.