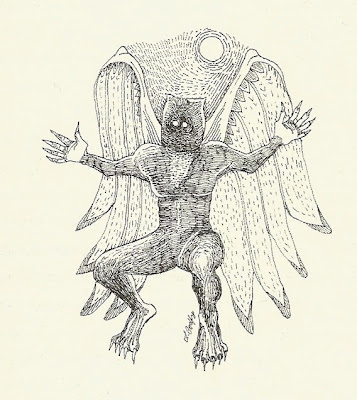 This illustration of Mothman comes from Linda S. Godfrey's book American Monsters: A History of Monster Lore, LEgends, and Sightings in America (Jeremy P. Tarcher/Penguin; 2014). I scrutinized every corner of the book to see who the artist who provided the illustrations-which appear at the beginning of every chapter and thus give form to so many of the monsters mentioned within—but couldn't find a credit for the illustrator, who signed his or her work, but whose signature isn't quite legible. I then wondered if Godfrey herself provided the illustrations, and the signature does indeed seem to say Linda S. Godfrey, when one reads it with that in mind. So I'm 98% sure that the above is Godfrey's own drawing of the Mothman (I wish I knew Godfre illustrated the book herself while I was reading it, as I think that may have made me look a bit closer at the pictures).

How does her Mothman rate? Well, at first glance, it's obviously a rather silly-looking Mothman, much more "man" than anything else. He is apparently wearing some form of clothes, and what appears to be a bag over his head. The tight-fitting outfit, mask and posture made me thing most immediately of a professional wrestler, which gave the image a great deal of charm. Her Mothman has quite a bit of detail visible, including a few details that seem original to Godfrey's illustration—that is, not taken from any sighting literature—including the long, claw-like nails on the creature's five-fingered hands and five-toed feet. Actually, the existence of toes of any kind is something I don't recall ever being reported on at all.

Regardless, I think the image Godfrey provides could work as an illustration of the creature responsible for the sightings. Imagine that particular creature there in a very, very dark setting, so that all one could see was his silhouette. Now imagine his arms by his sides, and his wings folded closer to his body, so that the outline of the wings would absorb all the other details—what you'd be left with is the basic, heart-shaped black shape with red eyes seemingly coming from somewhere between it's broad shoulders, and the mere suggestion of legs.

As well-lit as he appears in this drawing, that doesn't seem to be a very convincing Mothman, but in a darker environment, it works. And, as always, its fascinating to see the different ways artists render this most mysterious character. Godfrey's take is definitely among the more unique ones we've seen so far.
Posted by Caleb at 7:09 PM