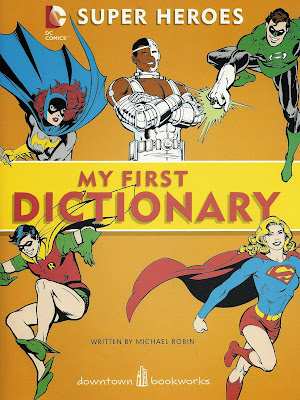 Last month I reviewed publisher Downtown Bookworks' Super Heroes: My First Dictionary for School Library Journal's Good Comics For Kids blog. I was genuinely interested in, even fascinated with, the book, for more than just professional reasons. As I mentioned in the short piece I wrote, in addition to all of the great art and fun, out-of-context imagery (writer Michael Robin seemed to gravitate towards all sorts of traditional comics blog fodder), I think a book like this speaks volumes about what an interested third party (here, Downtown Bookworks rather than DC Comics and DC Comics' core readership) think about DC's superheroes. You know, who the most noteworthy ones are, what their most familiar appearances and traits are, what the youngest of fans might be potentially interested in about them, and so on.

Here are some things I noted in that regard while reading through the book in preparation for the review... 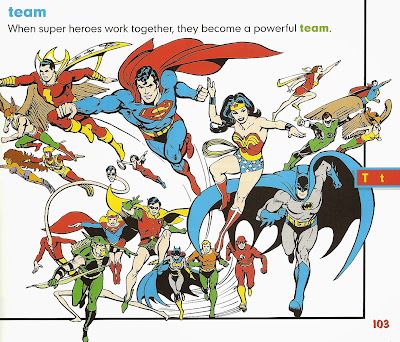 1.) No New 52 costumes This shouldn't really come as a surprise, I suppose, but there were a total of zero images taken from the "New 52" era of DC Comics, which began in September of 2011, and looks like it will be ending—at least as a branding exercise—in June of this year. There are no panels taken from any comics produced in that time, and while characters often appear in various versions of costumes they've worn over the years, they all tend to wear what they were wearing in the 1970s and 1980s (There are examples of Golden Age Batman, for example, but they are overwhelmed by images of "New Look" Batman).

Whatever the goals of the New 52 costume redesigns, and whatever virtues they might have had, as far as marketing DC's characters outside of comics shops goes, the original costumes are still considered the "real" ones. 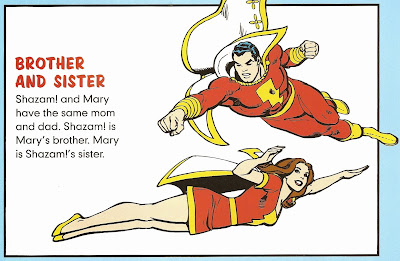 2.) Captain Marvel is now Shazam! The one nod to post-Flashpoint, New 52 changes I noticed was that the dictionary dropped superhero Captain Marvel's name and replaced it with Shazam!, exclamation point included, which was, of course, the name of the wizard who gave Billy Batson the magical ability to transform into Captain Marvel, and the magic word Billy would have to shout in order to effect that transformation.

Captain Marvel and characters from his world appear rather frequently in the book—surprisingly, so, really. Looking at the contents of this book, he would appear to be one of DC's top-tier characters, right up there with The Flash and Green Lantern.

Captain Marvel appears 15 times, usually as Captain Marvel but occasionally as Billy Batson, although in some cases they aren't named in their appearances at all. Black Adam appears in two entries alongside first Billy and than Captain Marvel; Uncle Dudley appears alongside Billy in one entry; Mr. Mind appears in two entries by himself ("Bored: There's nothing to do on Mr. Mind's home planet, so he feels bored" and "Smart: Mr. Mind is smart because he reads a lot"), and Mary Marvel appears four times.

But it seems especially wrong in a first dictonary for kids, meant to introduce them to definitions and word usage. I mean, there's a strange grammar element in every mention of the name "Shazam!" if they insist on keeping the exclamation point in there. If they have to call Captain Marvel Shazam (and please note all of the art here used pre-dates Cap's new name of Shazam by decades), they could at least lose the exclamation point.

Now, one quetion that arose immediately when DC officially renamed their Captain Marvel "Shazam" was what they were going to call the rest of the Marvel Family, which would almost certainly include Mary Marvel and Captain Marvel Jr. at the very least (Uncle Marvel and the Lieutenant Marvels and Hoppy The Marvel Bunny weren't so prevalent). Would they henceforth be called Mary Shazam and Shazam Jr., or...what, exactly?

When DC did introduce some of these characters—the expected Mary Marvel and Captain Marvel Jr.—in a new version of the Marvel Family in the Justice League back-ups collected in the trade Shazam! Vol. 1, they just went by their first names, although Freddy Freeman, the former Captain Marvel Jr., did refer to himself as "King Shazam."

Well, here's a possible answer as to what they might eventually end up being called. Mary is simply called "Mary," which is a pretty terrible superhero name, and the Marvel Family is referred to as "the Shazam! Family." 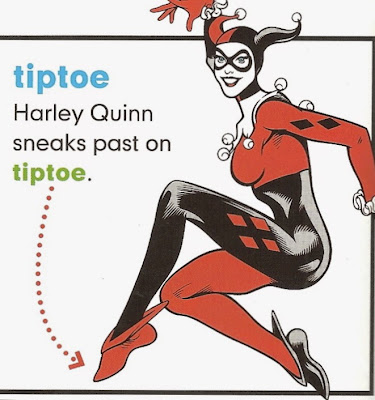 3.) Harley Quinn is in here for some reason Another relatively rare nod to the modern DC line of comic books is the inclusion of Harley Quinn. It's not as if female supervillains were needed for greater female inclusion within the book—Catwoman, Cheetah and Poison Ivy are all in here repeatedly—and Harley's presence within almost certainly reflects the character's greater prominence. She was created in 1992,  far later than every other character included in this book, making her a real outlier among the dozens of heroes and villains within. (Teen Titans Raven and Cyborg, who debuted in 1980, are probably the next most recent creations to officially appear in the book... although Green Lantern Kyle Rayner, who first appeared in 1994, does make uncredited cameo appearance in a counting section at the end of the book).

Harley Quinn is  drawn in her original costume, and in an old-school style that makes it look like she was pulled from a comic from the mid-1980s. She appears in two entries—those for "hat" and "tiptoe"—but both are the same image; the full-body "tiptoe" image is simply cropped to show just her head in the "hat" entry.


4.) They go surprisingly deep into DC's bench While Superman, Batman, Wonder Woman, Robin, Batgirl, The Flash, Aquaman, Shazam!, Green Lantern and Lois Lane are the most prominent characters in the book, you'll also find Animal Man (never in costume, though), Aqualad, The Atom, Beast Boy, Black Canary, Commissioner Gordon, Cyborg, Doctor Fate, the oddly-omnipresent Elongated Man, Firestorm, Green Arrow, Hawkman and Hawkgirl, Jimmy Olsen, Kid Flash Wally West (out-of-costume, in his original costume and in his later yellow and red costume) Martian Manhunter, Mera, Metamporpho (in just one panel, where he appears a slide with a head), Krypto, Plastic Man, Raven, Red Tornado, Speedy, Starfire (cropped so you only see her from the clavicles up), Streaky, Wonder Girl Donna Troy (in her red suit), Zatanna, and, in one panel, Star Sapphire and The Creeper. Golden Age Flash Jay Garrick and Golden Age Green Lantern Alan Scott both appear, but are simply called Green Lantern and The Flash, when there names are mentioned. Severely side-burned Teen Titan Jericho and Doom Patrol-er Robotman also appear, but go unnamed. A couple of Legionnaires appear in one panel as well, but they're not named.

That's probably for the best where Mxy's concerned; his is definitely not a good name to try and teach to three-year-olds...I think you have to have a pretty decent command of phonics before you get into trying to pronounce Fifth Dimensional names (I was writing this blog about three years before I finally memorized how to spell "Myxyzptlk," and I still have to sound it out). 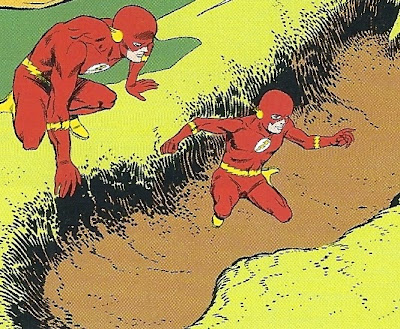 5.) They trust kids to roll with changes in characters' appearances As I said above, characters appear in different costumes throughout. For some of the more prominent characters, like Superman, Batman and Wonder Woman, these changes are all pretty minor; Golden Age Superman and John Byrne Superman look basically the same, and you might need to see them standing side-by-side to not the differences in the S-shield or the cut of his shorts. Similarly, the main difference between Golden Age Batman and "New Look" Batman is a matter of a yellow oval on his chest. Even Wonder Woman's, Golden, Silver and Bronze Age costume changes tend to be pretty minor, mostly involving the cut of her shorts and her footwear.

But other characters have pretty drastic costume changes. Elongated Man, for example, appears in his original, purple, masked costume, as well as his later red and black costume. I've already mentioned Kid Flash, who appears in his original costume, which was an exact duplicate of Flash's costume, and his later yellow and red costume. Green Arrow usually appears in his bearded look, but there are a few panels of the clean-shaven version of the character.  Supergirl's v-neck blouse with the poofy sleeves appears almost as often as the more traditional look, and Lois Lane looks pretty different in almost every appearance, with various lengths of black or auburn hair, and in radically different outfits, and holding radically different kinds of reporting equipment, given that the images of her are pulled from some 40  years worth of comics.

6.) A pretty decent attempt is made at naming the artists who contributed On the page opposite of the table of contents, there's a chunk of page-space devoted to thanking "the following illustrators whose artwork appears throughout the book," which lists 48 artists alphabetically, from Jack Abel to Tom Ziuko. It's not a comprehensive list, however.

For example, Norm Breyfogle isn't thanked, nor is Mike Mignola... 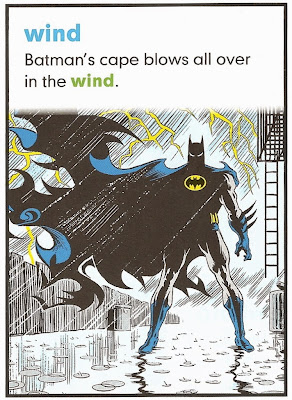 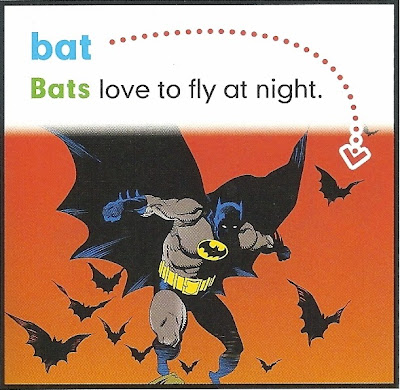 
7.) This is by far my favorite panel in the whole book: 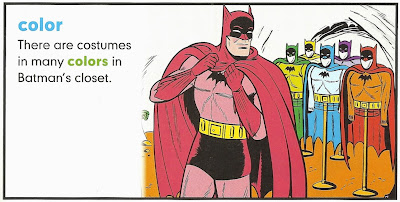 Mostly because of how completely out-of-context it is. Are tehre costumes in many colors in Batman's closet? Then how come he's always wearing the grey and blue one? Does he just where the pink, green and orange ones when he's lounging around the Batcave, or what? 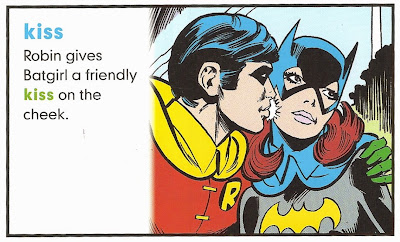 It really makes me want to find the comic book it was clipped from, so I can read the panel in context. Like, I know why Batman has all those crazy-colored costumes in his closet, but I don't know the circumstances that lead to Robin giving Batgirl "a friendly kiss" while the bored, somewhat surly-looking Batgirl reluctantly allows him to do so. 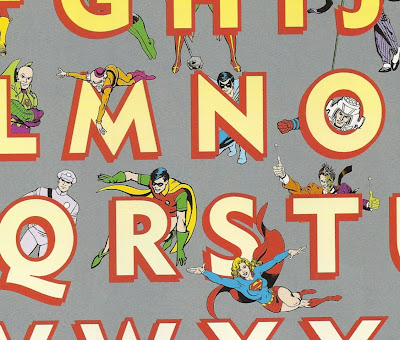 Who is that peeking out of the O...? And who is that in the tight-fitting uniform behind the Q...?
Posted by Caleb at 6:17 PM

Maybe they mixed him up with Quex-Ul? I would have gone with the Question, obviously, but surely there were other Q-characters.

No idea about O.

Yeah, it should be Quex-Ul but it's Zod

Intruder is correct. O is Orion in his terrible Super Powers re-design. (A rare fail from Kirby in that line.)