So Secret Wars, in which Marvel Crisis On Infinite Earths a bunch of alternate worlds and/or timelines into a single, renamed planet—presumably very temporarily—kicks off in May, and while it does indeed give rise to some really damn weird series, this particular round of solicitations seems jam-packed with unexpected series (and/or the continuation of recently launched unlikely series) that have nothing to do with Secret Wars.

You can click here to read all of the solicitations for all of the books Marvel plans to publish in May, and you can stay right where you are to read my comments on a few of 'em... 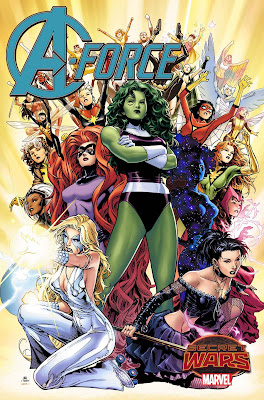 A-FORCE #1
G. WILLOW WILSON & MARGUERITE BENNETT (w) • JORGE MOLINA (a)
Cover by JIM CHEUNG
...
• Marvel’s Mightiest Women finally get their own explosive series!
• In a secluded corner of the Battleworld, an island nation is fiercely protected by a team of Avengers the likes of which has only ever been glimpsed before…
• Fighting to protect the small sliver of their world that’s left, the Amazing A-FORCE stands shoulder-to-shoulder, ready to take on the horde!
32 PGS./Rated T+ …$3.99

"A-Force" is a dumb name, and with the hyphen in it, all I can think of when looking at it is "A-Hole," which of course makes me think "Ass-Force."

I'm assuming the "A" stands for "Avengers" and not "Amazons" though, right? So why not just call it "Avengers Force" or "Avenger Force"? 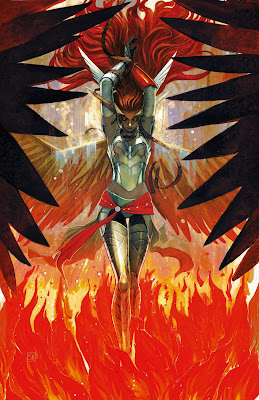 Angela gets a new costume! What's new about it? She's wearing clothes, apparently. 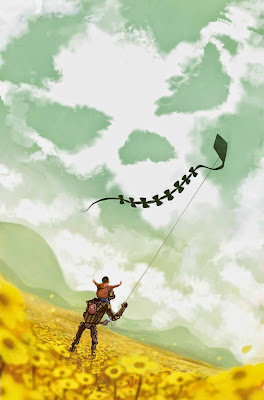 Another damn nice Michael del Mundo cover, this one for Bucky Barnes: The Winter Soldier. 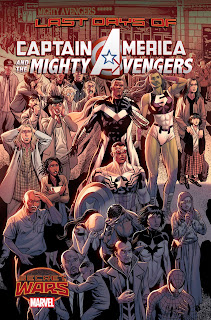 CAPTAIN AMERICA & THE MIGHTY AVENGERS #8
AL EWING (w) • LUKE ROSS (a/C)
• These are the stories of the end of the world, and of the people who faced the end together.
• Some of them wore costumes, and some of them didn’t. Some had super-human powers, and all some had were each other.
• They were the Mighty Avengers. And this is what they did on the last day.
32 PGS./Rated T+ …$3.99

The Last Days of Captain America and The Mighty Avengers...? Oh man, I hope they don't cancel this Al Ewing-written Mighty Avengers series. They haven't done that since...well, it will be eight issues ago in May. 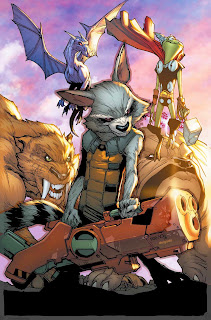 GUARDIANS TEAM-UP #5
ANDY LANNING & ANDY SCHMIDT (w)
GUSTAVO DUARTE (A)
Cover by HUMBERTO RAMOS
• The universe’s most powerful cabal of villainy has formed right under the Earth’s Mightiest Heroes’ noses--and they never noticed! This group of fowl (get it!) villains, is the Pets of Evil Masters!
• And they’re after world domination! Rocket must team-up with The Pet Avengers (much to his dismay) to face down the foes that no one else can (or will bother with) in this Earth-Shattering adventure that can only be told in the Mighty Marvel Manner!
32 PGS./Rated T+ …$3.99

Cool. I was honestly just thinking about The Pet Avengers recently, and wondering if we had seen the last of them. 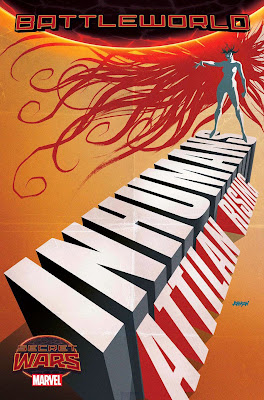 I'm assuming this cover for Inhumans: Attilan Rising is the Design Variant by DAVE JOHNSON. I kinda like it. 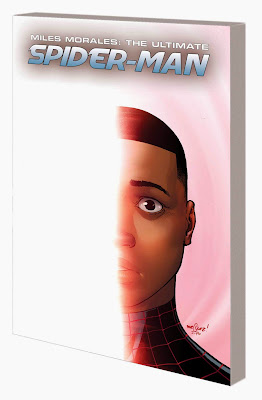 The most unexpected Convergence tie-in of them all!

(My sincere apologies to the thousands of other people who likely already made this joke). 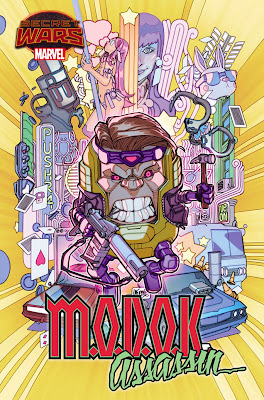 M.O.D.O.K. ASSASSIN #1 (of 5)
CHRIS YOST (w) • AMILCAR PINNA (a)
Cover by DAVID LAFUENTE
...
• In a world populated by the most fearsome thieves, murderers and ne’er-do-wells, there is one who is a HEAD above the rest…
• Enter, M.O.D.O.K.: The Mental Organism Designed Only for KILLING!
• Killville’s very own Merc with a Maw is open for business! But his next job may be biting off more than he can chew…
32 PGS./Rated T+ …$3.99

More M.O.D.O.K.! Man, M.O.D.O.K.'s jacket is like the best idea ever. Given his unusual body type, I'm assuming it's custom-made. Which would make that a jacket designed only for the Mental Organism Designed Only for Killing. 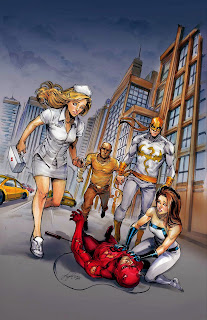 NIGHT NURSE #1
JEAN THOMAS, LINDA FITE & BRIAN MICHAEL BENDIS (w)
WINSLOW MORTIMER & ALEX MALEEV (A)
Cover by SIYA OUM
• Marvel’s 1970s cult-classic miniseries is collected in one super-sized one-shot!
• Linda Carter, Georgia Jenkins and Christine Palmer are all studying to become nurses. But what will happen when Linda must choose between love and career?
• Can Georgia stop her brother from holding the hospital hostage?
• As the nurses care for a mysterious hit-and-run victim, Christine realizes that her new boyfriend hides a terrible secret!
• When a mob war spills over into the hospital, Linda must act fast to save lives!
• Will Christine survive learning the secret of Sea-Cliff Manor?
• And when Daredevil is fatally shot, the Night Nurse must step out of the shadows and return to action!
• Guest-starring Black Widow, Elektra, Iron Fist, Luke Cage and Jessica Jones!
• Collecting NIGHT NURSE (1972) #1-4 and DAREDEVIL (1998) #80.
112 PGS./Rated T+ …$7.99

Huh. I wonder, is Night Nurse supposed to appear in one of those NetFlix Marvel shows or something...? Because, if not, this seems pretty random. I really rather liked what Brian K. Vaughan and Marcos Martin did with the character in Dr. Strange: The Oath, where she ran some sort of superhero patch-em-'up service.

I love how the solicitation for this says pretty much nothing at all, except from the fact that HOLY SHIT THERE ARE SO MANY VARIANTS FOR RETAILERS TO FRET OVER.

Well, it also says that the Ultimate Universe won't survive, but I'm pretty sure they've tried destroying it at least twice, maybe three time so far, and it never sticks. Maybe this is the time it will finally end. 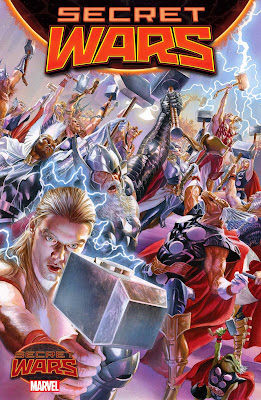 Is that everyone who has every weilded Mjolnir in any reality there? If so, where are Superman and Wonder Woman? Also, no one tell that one dude who wrote the funny article about how a woman having Thor's hammer "ruin[ed] a chereist art form" how many ladies are there with Thor hammers on that cover. 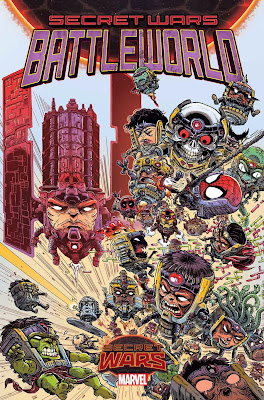 And all the Eisners this year go to...James Stokoe, for this variant cover to Secret Wars' sister series, Secret Wars: Battleworld. And to think I used to find the cover to Marvel Adentures: The Avengers #9 amusing, with it's paltry seven M.O.D.O.K.-ized Marvel characters on it... 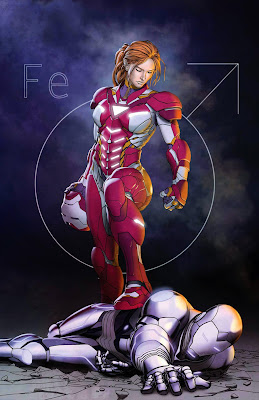 Is the surprising betrayal by Pepper Potts? Because, if so, that betrayal doesn't seem like it will be so surprising. It's on the cover, isn't it..?

At last is right. Eight issues? At $4 a pop? That means a reader would have had to invest about $32 just to find out who the new lady wielding Mjolnir actually is...? Yeesh. Do people actually like these kinds of mystery comics? I can't imagine I'd like such a story at that price point. 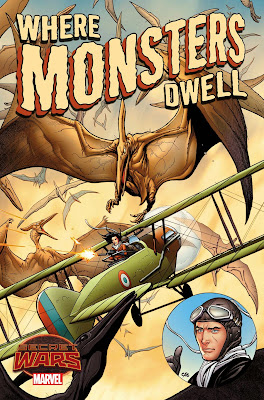 WHERE MONSTERS DWELL #1 (of 5)
GARTH ENNIS (w) • RUSS BRAUN (a)
Cover by FRANK CHO
...
• GARTH ENNIS returns to Marvel Comics proper and he’s bringing his The Boys collaborator Russ Braun along with him! Fighter planes and dinosaurs collide in this raucous tale that starts with the classic Marvel character Phantom Eagle and digs much deeper!
32 PGS./Rated T+ …$3.99

Monsers? GARTH ENNIS?! Russ Braun? A comic book war hero in a biplane? And dinosaurs?! The only way this book would be more perfect is if it were Enemy Ace instead of Phantom Eagle, but, well, you can't have everything. Where Monsters Dwell—The comic book that has almost everything!

Can't wait to read the trade collection of this...
Posted by Caleb at 2:11 PM

Night Nurse is going to be on the Daredevil show IIRC. One of them anyways...

Thing I find most interesting about Secret Wars/Battleworld is a rumor that one of the "classified" nations on the map is a Japan with Supaidaman, Battle Fever J, and the Shogun Warriors.

Which makes me wonder a bit, given the longstanding collaboration between Marvel and Toei, why they've never had Kamen Rider cross over into the Marvel universe.